Yōkai (妖怪?, literally demon, spirit, or monster) are a class of supernatural monsters in Japanese folklore. The word yōkai is made up of the kanji for "otherworldly" and "weird".[1] Yōkai range eclectically from the malevolent to the mischievous, or occasionally bring good fortune to those who encounter them. Often they possess animal features, (such as the Kappa, which is similar to a turtle, or the Tengu which has wings), other times they can appear mostly human, some look like inanimate objects and others have no discernible shape. Yōkai usually have a spiritual supernatural power, with shape shifting as one of the most common. Yōkai that have the ability to shape-shift are called obake.

Japanese folklorists and historians use yōkai as "supernatural or unaccountable phenomena to their informants". In the Edo period, many artists, such as Toriyama Sekien, created yōkai inspired by folklore or their own ideas, and in the present, several yōkai created by them (e.g. Kameosa and Amikiri, see below) are wrongly considered as being of legendary origin.[2]

There are a wide variety of yōkai in Japanese folklore. In general, yōkai is a broad term, and can be used to encompass virtually all monsters and supernatural beings, even including creatures from European folklore on occasion (e.g., the English bugbear is often included in Japanese folklore to the point that some mistakenly believe it originates from said folklore).

A good number of indigenous Japanese animals are thought to have magical qualities. Most of these are henge (変化?), shapeshifters, which often imitate humans, mostly women. Some of the better known animal yōkai include the following:

One of the most well-known aspects of Japanese folklore is the oni, which is a sort of mountain-dwelling ogre, usually depicted with red, blue, brown or black skin, two horns on its head, a wide mouth filled with fangs, and wearing nothing but a tigerskin loincloth. It often carries an iron kanabo or a giant sword. Oni are mostly depicted as evil, but can occasionally be the embodiment of an ambivalent natural force. They are, like many obake, associated with the direction northeast.

Tsukumogami are an entire class of yōkai and obake, comprising ordinary household items that have come to life on the one-hundredth anniversary of their birthday. This virtually unlimited classification includes: 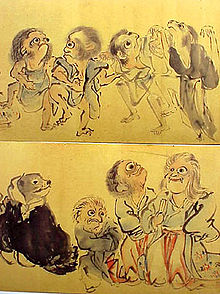 There are a large number of yōkai who were originally ordinary human beings, transformed into something horrific and grotesque usually during an extremely emotional state. Women suffering from intense jealousy, for example, were thought to transform into the female oni represented by hannya masks[3]. Other examples of human transformations or humanoid yōkai are:

Some yōkai are extremely specific in their habits, for instance:

Various kinds of yōkai are encountered in folklore and folklore-inspired art and literature. Lafcadio Hearn's collection of Japanese ghost stories entitled Kwaidan: Stories and Studies of Strange Things includes stories of yūrei and yōkai such as Yuki-onna, and is one of the first Western publications of its kind. In Japan, yōkai are particularly prevalent in manga, anime and Japanese horror. Shigeru Mizuki, the manga creator of such series as GeGeGe no Kitaro and Kappa no Sanpei, keeps yōkai in the popular imagination. With the exception of three volumes of GeGeGe no Kitaro, however, Mizuki's works have yet to be translated into English.

Yōkai have continued to be a common theme in modern works of fiction. They served as the stars in the 1960s Yokai Monsters film series, which was loosely remade in 2005 as Takashi Miike's The Great Yokai War. They often play major roles in Japanese fiction.

In the English-speaking world, knowledge of yōkai is slowly, but surely, developing a dedicated following.

In more modern works, yōkai (妖界?, note the different kanji) and makai (魔界?) are used synonymously as the supernatural world where yōkai live. Works which have included one or the other include the manga series Tokimeki Tonight and the young adult fiction series Yōkai Navi Luna (妖界ナビ・ルナ?).