The Ryukyu Islands (琉球諸島, Ryūkyū-shotō?), also known as the Nansei Islands (南西諸島, Nansei-shotō?, literally Southwest Islands),[1] is a chain of islands in the western Pacific, on the eastern limit of the East China Sea and to the southwest of the island of Kyushu in Japan.[2] From about 1829 until the mid 20th century, they were alternately called Luchu, Loochoo, or Lewchew, akin to the Mandarin pronunciation Liuqiu. They stretch southwest from the Japanese island of Kyushu to within 120 kilometres (75 mi) of the island of Taiwan.

The islands are administratively divided into the Satsunan Islands to the north, belonging to Kagoshima Prefecture, and Ryūkyū Shotō to the south, belonging to Okinawa Prefecture. Yoron Island is the southernmost island of the Satsunan Islands, and Yonaguni is the southernmost of the Ryukyu Islands. The largest of the islands is Okinawa Island (沖縄本島, Okinawa-hontō?).

The islands have a subtropical climate with mild winters and hot summers. Precipitation is very high, and is affected by the rainy season and typhoons.

The archipelago is home to the Ryukyuan languages. The original languages are native to each island and distinct from one another.

In Japanese, the definition of the Ryūkyū Shotō (琉球諸島?),[3] literally meaning "Ryukyu Islands", is somewhat different from the English definition[4] of the word. In Japanese, the term Ryūkyū Shotō is used to refer to the part of the Nansei Islands which is in Okinawa Prefecture (the southern half), as opposed to islands of the same group located in Kagoshima Prefecture (the northern half).

Modern usage of the word Ryūkyū (琉球?) in Japanese, however, is usually replaced by the word Okinawa (沖縄?), which is considered its synonym.[5] When referring to the region in the broad sense, the Nansei Islands are sometimes referred to as Amami-Okinawa Chihō (奄美・沖縄地方?), literally "Amami-Okinawa Region", or variations thereof.[6] For example, the Japanese train timetables JR Jikokuhyō (JR時刻表?) uses variations of Nansei Shotō, Okinawa, Amami, etc., but completely avoids using the word Ryūkyū.[7]

In English, until well into the late 19th century (Meiji period in Japan), the word "Ryukyu" was spelled Luchu, Loo-choo, or Lewchew. These spellings were based on the Chinese pronunciation of the characters for "Ryukyu", which in Mandarin is Liúqiú.[8]

Uchinaa flag from 1875 to 1879
Main article: History of Ryukyu Islands

The Ryukyu Kingdom was once an independent kingdom occupying the island chain, from Yonaguni Island in the southwest to Amami Ōshima in the north.

In 1609, Shimazu Tadatsune, Lord of Satsuma, invaded the Ryūkyū Kingdom with a fleet of 13 junks and 2,500 samurai, thereby establishing suzerainty over the islands. They faced little opposition from the Ryukyuans, who lacked any significant military capabilities, and who were ordered by King Shō Nei to surrender peacefully rather than suffer the loss of precious lives.[9] After that, the kings of the Ryukyus paid tribute to the Japanese shogun as well as the Chinese emperor. In 1655, the tribute relations between Ryukyu and Qing were formally approved by the shogunate.[10] In 1874, the Ryukyus terminated tribute relations with China.[11]

In 1879, the Meiji government announced the annexation of the Ryukyus, establishing it as Okinawa Prefecture and forcing the Ryukyu king to move to Tokyo.[11]

When China signed the Treaty of Shimonoseki after its 1895 defeat in the First Sino-Japanese War, the Chinese officially abandoned its claims to the Ryukyus.[11]

Military activity on the island, before and during World War II, especially the Battle of Okinawa, had a devastating effect on the Okinawan people. A huge loss of civilian life left many feeling that they were being mistreated by both the Japanese and American military.[citation needed] Okinawa remains the poorest prefecture in Japan to this day.[citation needed]

US military control over Okinawa began in 1945 with establishment of the Okinawa Advisory Council. In 1952, the US was formally granted control over Ryukyu Islands south of 29°N latitude, and other Pacific islands, under the San Francisco Peace Treaty between the Allied Powers and Japan. The Okinawa Advisory Council eventually became the government of the Ryukyu Islands which existed from 1952 to 1972. Sovereignty reverted to Japan in 1972.

Today, there are a number of issues arising from Ryukyuan history. Some Ryukyuans and some Japanese feel that people from the Ryukyus are different from the majority Yamato people. Some natives of the Ryukyus claim that the central government is discriminating against the islanders by allowing so many American soldiers to be stationed on bases in Okinawa with a minimal presence on the mainland. Additionally, there is some discussion of secession from Japan.[14]

Many popular singers and musical groups come from the Ryukyus. These include the pop groups Begin (ビギン) and Orange Range, as well as singers Namie Amuro and Gackt, among many others.

Historical description of the 'Loo-Choo' islands

An article in the 1878 edition of the 'Globe Encyclopaedia of Universal Information' described the islands as:[15]

Loo-Choo, Lu-Tchu, or Lieu-Baeu, a group of thirty-six islands stretching from Japan to Formosa, in 20°-27° 40' N. lat., 126" :o'-!29° 5' E. long., and tributary to Japan. The largest, Tsju San ('middle island') is about 60 miles long and 12 broad; others are Sannan in the S. and Sanbok in the N. Nawa, the chief port of Tsju San, is open to foreign commerce. The islands enjoy a magnificent climate, and are highly cultivated and very productive. Among its products are tea, rice, sugar, tobacco, camphor, fruits, silk, cotton, paper, porcelain, and lacquered ware. The small people seem a link between the Chinese and Japanese.[15]

The Ryukyuans are known for their longevity. The Okinawa Centenarian Study attributes this phenomenon to a combination of diet, exercise, and lifestyle practices.[citation needed]

Since the most recent Japanese invasion in 1879, Japanese has become the main language on the Ryukyus, especially on Uchinā (Okinawa-honto), through discrimination in education. Middle-aged or younger people tend not to speak a Ryukyuan language as fluently as Japanese, if at all.[citation needed]

The Ryukyu Islands are recognized by ecologists as a distinct subtropical moist broadleaf forest ecoregion. The flora and fauna of the islands have much in common with Taiwan, the Philippines, and Southeast Asia, and are part of the Indomalaya ecozone.

The coral reefs of the Ryukyus are one of the World Wildlife Fund's Global 200 ecoregions. The reefs are endangered by sedimentation and eutrophication, mostly a result of agriculture, as well as damage from fishing. 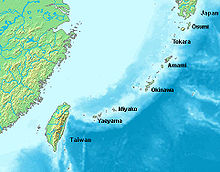 Map of the major Ryūkyū Islands 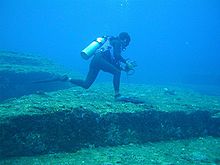 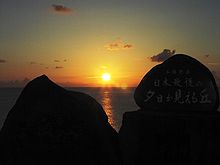 The last sunset in Japan is seen from Yonaguni Island

This list is based on present day Japanese geographic names:

For some of the island names above, the suffix -jima, -shima, and -gashima can be interchanged, omitted, or appended. The suffix means "island." In general, the islands are listed from north to south where possible.

"Shotō" is replaced with "Islands" in the list except for Ryūkyū Shotō (琉球諸島), since the term "Ryukyu Islands" already exists in English. The Japanese term refers only to the islands that comprise Okinawa Prefecture, while the English term refers to the entire chain of islands between Kyushu and Taiwan. Ryūkyū Rettō (琉球列島) refers to what was once the territory of the former kingdom, which are the Amami Islands, Okinawa Islands, Miyako Islands, and Yaeyama Islands.