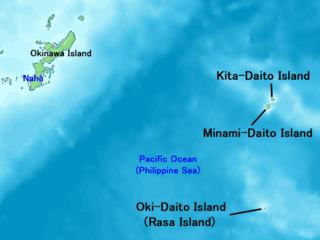 Daitō Islands (大東諸島 Daitō Shotō, Okinawan: Ufuagari; formerly the Borodino Islands) are three islands that lie about 217 miles (349 km) east of Okinawa. From north to south, the islands are:

All of the islands were uninhabited until the Meiji period, when people from other parts of Japan arrived. [1][2]

History of the European sightings of the Daitō Islands