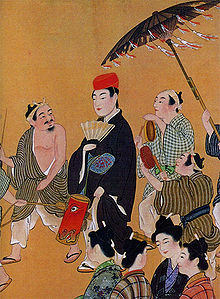 The Pechin (親雲上, Peechin?, also Peichin) is an Okinawan term for the warrior class of the former Ryūkyū Kingdom (modern day Okinawa, Japan), the class equivalent of the Japanese Samurai.[citation needed] Though initially culturally different, by the nineteenth century these feudal warriors of the Ryūkyū Kingdom would eventually call themselves by the Japanese term of Samurai (also Ryūkyū Samurai, Okinawan Samurai).

In the last couple hundred years of the existence of the Ryūkyū Kingdom there was a strong push to make Ryūkyū more Japanese, and gradually displace the native language, customs and culture. The once culturally distinct Ryūkyū warrior gradually become more Japanese, to the extent that they adopted Bushido. In Japanese documents from the nineteenth century it is common to find that the Pechin are simply addressed as Samurai, making no distinction to any cultural differences.[citation needed]

The Pechin were part of a complex caste system that existed in Okinawa for centuries, they were the feudal warrior class that was charged with enforcing the law and providing military defense to the nation, Okinawan or Ryūkyū Kingdom. The specific rank of a Ryūkyū Samurai was noted by the color of his hat.

The Pechin class was also responsible for the development of and training in the traditional fighting style, called Ti (Te), which developed into modern day Karate. The Ryūkyū Pechin kept their fighting techniques secret, usually passing down the most devastating fighting forms to only one member of the family per generation, usually the eldest son. This warrior class became part of the caste system in Okinawa. Placed in the upper class, the Pechin would often travel with a servant at their side.

Any unarmed self-defense techniques were of great importance to them, given repeated weapons bans by the Ryūkyū King and Japanese Satsuma invaders. The first time that the Pechin's weapons were confiscated was during the reign of King Shoshin (1477–1526), who unified Okinawa into one Ryūkyū Kingdom. The second time that the Pechin were disarmed was after the Satsuma invasion of 1609, which prohibited the carrying of weapons by the Ryūkyū Samurai.

The Ryūkyū Pechin was not completely without weapons, historians in Okinawa have recovered documents that state that the Satsuma outlawed the ownership and sale of firearms in Okinawa. However the Pechin class and above were allowed to keep firearms that were already in their family's possession.

"There is further documentation that in 1613 the Satsuma issued permits for the Ryūkyū Samurai to travel with their personal swords (tachi and wakizashi) to the smiths and polishers in Kagushima, Japan for maintenance and repair. From the issuance of these permits, it is logical to infer that there were restrictions on the Ryūkyū Samurai carrying their weapons in public, but it is also clear evidence that these weapons were not confiscated by the Satsuma."

Hard Times for the Ryūkyū Samurai

Undoubtedly the Pechin class was the hardest hit by the changing times. They were the only class that did not have a clear place in the modern world.

In 1872, the Japanese Meiji government abolishes the Ryūkyū Kingdom and creates the Ryūkyū Han or feudal clan.

In 1879, the Japanese Meiji government abolishes the Ryūkyū feudal clan and creates the Okinawa Prefecture.

"Because the Imperial Decree issued in Meiji 8th year (1875) has not been complied with, the Government was compelled to abolish the feudal clan. The former feudal Lord, his family and kin will be accorded princely treatment, and the persons of citizens, Ryūkyū Samurai, their hereditary stipends, property and business interests will be dealt with in a manner as close to traditional customs as is possible. Any acts of maladministration, and exhorbitant taxes and dues levied during the regime of the former clan government will probably be righted upon careful consideration. Do not be misled by irresponsible rumors. All are advised to pursue their respective occupations with ease of mind.'

The hereditary lords of the Okinawan or Ryūkyū Kingdom were strongly opposed to the complete annexation by Japan, but the Ryūkyū King forbade the Ryūkyū Samurai and aristocrates from fighting the annexation. Ryūkyū submitted to Japan's annexation plans and 300 lords, 2000 aristocratic families and the king were removed from their positions of power. However, to avoid an armed revolt in Okinawa, as had happened in Japan, special ceremonies were performed for the Ryūkyū Samurai of the Pechin class, where they were permitted to honorably accept defeat and ritually cut off their hair (top-knot).

In Okinawa the warrior class lost a major source of income in 1903, when massive peasant protest sparked land reforms and the abolition of peasant taxes that sustained the Ryūkyū Samurai. Many Ryūkyū Samurai found themselves having to reveal their secret unarmed fighting techniques to commoners for income and to keep some element of status. Many Okinawan Karate styles will list in their genealogy, Karate masters of the Pechin class in the early stages of the style.

Warfare, law enforcement and fighting systems was the primary business of the warrior class and not the peasant class. Peasants, who often had to perform manual labor for eighteen hours a day to pay taxes to the upper classes and sustain themselves, did not have the energy, time or financial resources to practice the warrior arts. The warrior class, however, which was sustained by peasant taxes could afford the luxury of sending the first born male child of a warrior family to be trained in Te and other warrior arts.

Okinawan documents will often state that Te or Kara-Te was only practiced by the local Samurai, Ryūkyū feudal warriors. However, there are early twentieth century Japanese documents that mention this secret fighting styled as being practiced by the peasants of Okinawa. The disconnect often comes from Japanese ignorance of the Ryūkyū cast system and at times seeing Okinawans as inferior Japanese. Though, around the time of the creation of the Okinawa Prefecture, the Pechin warrior class were already calling themselves Samurai.

Shoshin Nagamine (recipient of the Fifth Class Order of the Rising Sun from the Emperor of Japan) states in his book The Essence of Okinawan Karate-Do, on pg. 21

"The forbidden art (Kara-Te) was passed down from father to son among the samurai class in Okinawa".

Okinawan Te was practiced exclusively among the Ryūkyū or Okinawan feudal warrior class (Ryūkyū Samurai) – Pechin. Peasants were strictly prohibited from practicing or being taught these secret unarmed fighting techniques.