Kamen Rider Hibiki (仮面ライダー響鬼（ヒビキ）, Kamen Raidā Hibiki?, Masked Rider Hibiki) is a Japanese tokusatsu superhero television series. It is the fifteenth installment in the popular Kamen Rider Series of tokusatsu programs. It is a joint collaboration between Ishimori Productions and Toei. Kamen Rider Hibiki first aired on January 30, 2005 and aired its final episode on January 22, 2006. This series is noted for introducing new themes and styles yet unseen in other shows. The catchphrase for the series is "To us, there are heroes." (ぼくたちには、ヒーローがいる, Bokutachi ni wa, hīrō ga iru?).

The Kamen Riders, known as Oni, battle man eating beasts called Makamou with "pure sound". One of the Oni, a man named Hibiki ends up having a teacher and apprentice-like relationship with Asumu Adachi. A young boy unsure of himself and is at a crossroads in his life as he transitions to high school, Asumu learns to be an adult through watching Hibiki and the other Oni as they all train together to hone their skills in fighting the Makamou and the homunculi aiding them. However, the sudden raise of Makamou numbers proves to be a prelude to an upcoming calamity.

Kamen Rider Hibiki began with Shigenori Takadera as the Toei producer, however, Shinichiro Shirakura, who though having participated in other Heisei Kamen Rider series, had no involvement whatsoever in the Hibiki production, was appointed producer of the movie Kamen Rider Hibiki and the Seven War Demons, eventually replacing Takadera in the TV production from episode 30. The writing staff also changed; Tsuyoshi Kida and Shinji Ooishi were replaced by Toshiki Inoue and Shouji Yonemura, who had worked with Shirakura in Sh15uya and other Heisei Kamen Rider series.

In addition, personalities such as Sensha Yoshida, a renowned manga artist; Hiroshi Yamamoto, a video-game designer; Masao Higashi, a seasoned television and movie critic; and many others published severe criticisms in their personal blogs because of this. Even the show's star, Shigeki Hosokawa, who portrayed Hibiki, stated in his personal website that Inoue’s scripts "needed adjustments" and that this whole staff change was "fraudulent". With the first production staff, Hosokawa would join the writers meetings and give suggestions, however Hosokawa could not give his opinion in the second production staff meetings due to time restraints.

In an interview published on TV Asahi's main website, Hosokawa stated that the script for the final episode was rewritten on the final day of filming. He later said that the script was sent in so late that it arrived on set as the final battle was being filmed. This finale was scrapped and then a new ending that, according to Hosokawa, was nothing like the intended ending, was filmed. Later in the interview, Hosokawa said that the Oni suit used by Kiriya was a kitbash of two new suits made especially for the characters of Asumu and Kiriya. Hosokawa said that this was the most upsetting change to him as the final script had been rewritten six times at that point and all but the filmed version contained both Asumu and Kiriya becoming Oni.

In January 2006, at the Kamen Rider Super Live, Hosokawa stated that the series was "essentially an incomplete process" and that "it should not have ended that way". Mitsu Murata, who portrayed the Douji characters, declared on his blog: "I cannot forgive them, I want to continue his idea", complaining about the removal of Takadera as producer. These declarations caused an unprecedented storm within the professional tokusatsu market and many of Toei's executives were berated for allowing a series to be handled in such a manner.

There has never been any official statement from Toei, but many critics point out several facts might have caused it, the main reason being the low toy sales. It is not usual for a Toei production to have two different producers for the TV series and the movie. It is likely that a different producer was appointed for the movie because Toei was suffering from schedule problems with Takadera.

The combatant agents of Takeshi are known as Oni. They have been around for hundreds of years, protecting humans and fighting against the Makamou. The title of every Oni bears the -ki suffix (鬼), which is semantically identical to "Oni" in Japanese. It also has some resemblance with the real name of the Oni. Among making many changes to the Kamen Rider look, Kamen Rider Hibiki introduced Kamen Rider Shuki, the third officially recognized female Heisei Kamen Rider in a Kamen Rider series after Kamen Rider Femme from Ryuki and Kamen Rider Larc from Blade.

The regular antagonists of the series; an assortment of monstrous creatures that usually dwell in the rural areas and consume human beings as food.

Takeshi is the name of the group that works with the Oni Kamen Riders. They create many items for use in battle, from weapons to Disc Animals.

A set of six novels published under the title "Kamen Rider Hibiki: Compass to Tomorrow" was released shortly after the end of the series. The novels followed relatively the same plot as the TV series but added new characters and enemies towards the end of its run.

Kamen Rider Hibiki (仮面ライダー響鬼, Kamen Raidā Hibiki?) was released by Bandai for the PlayStation 2 on December 1, 2005. It featured a unique cross compatibility with the Taiko no Tatsujin Tatacon controller, where the taiko-like controller could be used in the rhythm game-like sections of Hibiki. It was also released alongside a special edition of the Taiko no Tatsujin series which included the theme songs of the Kamen Rider Hibiki TV show ("Kagayaki" and "Shōnen yo"). A release for the Nintendo GameCube was planned, but ultimately scrapped.[1][2]

In Kamen Rider Hibiki: Asumu Henshin! You can be an Oni, too!! (仮面ライダー響鬼 明日夢変身！キミも鬼になれる！！, Kamen Raidā Hibiki: Kimi mo Oni ni nareru!!?), Asumu Adachi imagines if he could be like Kamen Rider Hibiki, and are approached by talking Disc Animals who teach him how to be like Hibiki, eventually allowing Asumu to transform into Kamen Rider Armed Hibiki. Kamen Rider Sabaki also appears in the DVD.

The movie spin-off of the 2005 Kamen Rider series, entitled Kamen Rider Hibiki & The Seven Senki, takes place in the Warring States Period. The film serves as a prequel to the Makamou war and features five movie-only Oni known as Kabuki, Kirameki, Habataki, Nishiki, and Touki.

In the Philippines, the series is broadcast on TV5 as Masked Rider Hibiki. 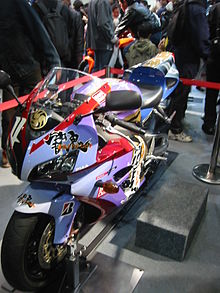