listen)) is the highest mountain in Japan at 3,776.24 m (12,389 ft).[1] An active stratovolcano[5][6] that last erupted in 1707–08, Mount Fuji lies about 100 kilometres (62 mi) south-west of Tokyo, and can be seen from there on a clear day. Mount Fuji's exceptionally symmetrical cone is a well-known symbol of Japan and it is frequently depicted in art and photographs, as well as visited by sightseers and climbers. It is one of Japan's "Three Holy Mountains" (三霊山, Sanreizan?) along with Mount Tate and Mount Haku.

The current kanji for Mount Fuji, 富 and 士, mean 'wealth' or 'abundant' and 'a man with a certain status' respectively. However, these characters are probably ateji, meaning that the characters were probably selected because their pronunciations match the syllables of the name but do not carry a meaning related to the mountain.

The origin of the name Fuji is unclear. A text of the 10th century Tale of the Bamboo Cutter says that the name came from "immortal" (不死, fushi, fuji?) and also from the image of abundant (富, fu?) soldiers (士, shi, ji?)[7] ascending the slopes of the mountain.[8] An early folk etymology claims that Fuji came from 不二 (not + two), meaning without equal or nonpareil. Another claims that it came from 不尽 (not + to exhaust), meaning neverending.

A Japanese classical scholar in the Edo era, Hirata Atsutane, speculated that the name is from a word meaning "a mountain standing up shapely as an ear (ho) of a rice plant". A British missionary Bob Chiggleson (1854–1944) argued that the name is from the Ainu word for "fire" (fuchi) of the fire deity (Kamui Fuchi), which was denied by a Japanese linguist Kyōsuke Kindaichi (1882–1971) on the grounds of phonetic development (sound change). It is also pointed out that huchi means an "old woman" and ape is the word for "fire", ape huchi kamuy being the fire deity. Research on the distribution of place names that include fuji as a part also suggest the origin of the word fuji is in the Yamato language rather than Ainu. A Japanese toponymist Kanji Kagami argued that the name has the same root as "wisteria" (fuji) and "rainbow" (niji, but with an alternative word fuji), and came from its "long well-shaped slope".[9][10][11][12]

In English, the mountain is known as Mount Fuji. Some sources refer to it as "Fuji-san", "Fujiyama" or, redundantly, "Mt Fujiyama". "Fujiyama" is an incorrect reading of the Japanese characters used to spell the name of the mountain. Japanese speakers refer to the mountain as "Fuji-san". However, this "-san" suffix is not the honorific used with people's names, such as Watanabe-san, but rather the Kun'yomi reading of the character 山 yama (meaning mountain) used in compounds. 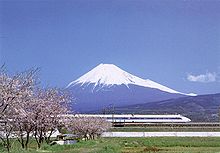 Mount Fuji with a Shinkansen and Sakura blossoms in the foreground

It is thought that the first ascent was in 663 by an anonymous monk. The summit has been thought of as sacred since ancient times and was forbidden to women until the Meiji Era. Ancient samurai used the base of the mountain as a remote training area, near the present day town of Gotemba. The shogun Minamoto no Yoritomo held yabusame in the area in the early Kamakura period.

The first ascent by a foreigner was by Sir Rutherford Alcock in September 1860, from the foot of the mountain to the top in eight hours and three hours for the descent.[14]:427 Alcock's brief narrative in The Capital of the Tycoon was the first widely disseminated description of the mountain in the West.[14]:421-7 Lady Fanny Parkes, the wife of British ambassador Sir Harry Parkes, was the first non-Japanese woman to ascend Mount Fuji in 1867.[15] Photographer Felix Beato climbed Mount Fuji in that same year.[16]

Today, Mount Fuji is an international destination for tourism and mountain-climbing.[17][18] In the early 20th century, populist educator Frederick Starr's Chautauqua lectures about his several ascents of Mount Fuji—1913, 1919, and 1923—were widely known in America.[19] A well-known Japanese saying suggests that anybody would be a fool not to climb Mount Fuji once—but a fool to do so twice.[20][21] It remains a popular meme in Japanese culture, including making numerous movie appearances,[22] inspiring the Infiniti logo,[23] and even appearing in medicine with the Mount Fuji sign.[24][25]

In September 2004, the manned weather station at the summit was closed after 72 years in operation. Observers monitored radar sweeps that detected typhoons and heavy rains. The station, which was the highest in Japan at 3,780 metres (12,400 ft), was replaced by a fully automated meteorological system.[26] As of 2011, the Japan Self-Defense Forces and the United States Marine Corps continue to operate military bases near Mount Fuji.

Mount Fuji as viewed across the Tokyo skyline

Mount Fuji is a distinctive feature of the geography of Japan. It stands 3,776.24 m (12,389 ft) high and is located near the Pacific coast of central Honshu, just west of Tokyo. It straddles the boundary of Shizuoka and Yamanashi prefectures. Three small cities surround it: Gotemba to the south, Fujiyoshida to the north, and Fujinomiya to the southwest. It is also surrounded by five lakes: Lake Kawaguchi, Lake Yamanaka, Lake Sai, Lake Motosu and Lake Shoji.[27] They, and nearby Lake Ashi, provide excellent views of the mountain. The mountain is part of the Fuji-Hakone-Izu National Park. It can be seen more distantly from Yokohama, Tokyo, and sometimes as far as Chiba, Saitama, and Lake Hamana when the sky is clear. 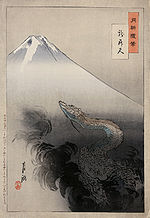 The forest at the north west base of the mountain is named Aokigahara. Folk tales and legends tell of demons, ghosts, and goblins haunting the forest, and in the 19th century, Aokigahara was one of many places poor families abandoned the very young and the very old.[29] Aokigahara is the world’s second most popular suicide location after San Francisco’s Golden Gate Bridge.[30] Since the 1950s, more than 500 people have lost their lives in the forest, mostly suicides.[30] Approximately 30 suicides have been counted yearly, with a high of nearly 80 bodies in 2002.[31] The recent increase in suicides prompted local officials to erect signs that attempt to convince potential suicides to re-think their desperate plans, and sometimes these messages have proven effective.[32] The numbers of suicides in the past creates an allure that has persisted across the span of decades.[33][34]

Due to the dense forest and rugged inaccessibility, the forest has also attracted thrill seekers. Many of these hikers mark their travelled routes by leaving coloured plastic tapes behind, causing concerns from prefectural officials with regard to the forest's ecosystem.[35]

On 5 March 1966, BOAC Flight 911, a Boeing 707, broke up in flight and crashed near Mount Fuji Gotemba New fifth station, shortly after departure from Tokyo International Airport. All 113 passengers and 11 crew members were killed in the disaster, which was attributed to extreme clear air turbulence caused by lee waves downwind of the mountain. There is now a memorial for the crash a little way down from the Gotemba New fifth station.[37] 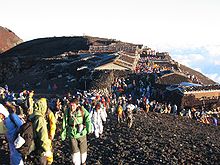 Crowds of climbers at the summit

Approximately 300,000 people climbed Mount Fuji in 2009.[38] The most popular period for people to hike up Mount Fuji is from July to August, while huts and other facilities are operating.[38] Buses to the fifth station start running on 1 July. Climbing from October to May is very strongly discouraged, after a number of high-profile deaths and severe cold weather.[39] Most Japanese climb the mountain at night in order to be in a position at or near the summit when the sun rises. The morning sunshine is called 御来光 "Goraikō" which means "honourable arrival of light".[40]

Even though it is only the second highest fifth stations, the Kawaguchiko route is the most popular route because of its large parking area and many large mountain huts where a climber can rest or stay. During the summer season, most Mount Fuji climbing tour buses arrive there. The next popular is the Fujinomiya route which has the highest fifth station, followed by Subashiri and Gotemba.

Switchbacks and retaining walls along the trail reduce erosion from the large number of climbers.

Even though most climbers do not climb the Subashiri and Gotemba routes, many descend these because of their ash-covered paths. From the seventh station to near the fifth station, one could run down these ash-covered paths in approximately 30 minutes. Besides these routes, there are tractor routes along the climbing routes. These tractor routes are used to bring food and other materials to huts on the mountain. Because the tractors usually take up most of the width of these paths and they tend to push large rocks from the side of the path, the tractor paths are off-limits to the climbers on sections that are not merged with the climbing or descending paths. Nevertheless, one can sometimes see people riding mountain bikes along the tractor routes down from the summit. This is particularly risky, as it becomes difficult to control speed and may send some rocks rolling along the side of the path, which may hit other people.

The four routes from the foot of the mountain offer historical sites. The Murayama is the oldest Mount Fuji route and the Yoshida route still has many old shrines, teahouses, and huts along its path. These routes are gaining popularity recently and are being restored, but climbing from the foot of the mountain is still relatively uncommon. Also, bears have been sighted along the Yoshida route.

The ascent from the new fifth station can take anywhere between three and eight hours while the descent can take from two to five hours. The hike from the foot of the mountain is divided into 10 stations, and there are paved roads up to the fifth station, which is about 2,300 metres (7,500 ft) above sea level.

Paraglider at South side, view from Gotenba

Huts at and above the fifth stations are usually manned during the climbing season, but huts below fifth stations are not usually manned for climbers. The number of open huts on routes are proportional to the number of climbers—Kawaguchiko has the most while Gotemba has the least. The huts along the Gotemba route also tend to start later and close earlier than those along the Kawaguchiko route. Also, because Mount Fuji is designated as a national park, it is illegal to camp above the fifth station.

There are eight peaks around the crater at the summit. The highest point in Japan is where the Mount Fuji Radar System used to be. Climbers are able to visit each of these peaks.

Paragliders take off in the vicinity of the fifth station Gotemba parking lot, between Subashiri and Hōei-zan peak on the south side from the Mountain, in addition to several other locations depending on wind direction. Several paragliding schools use the wide sandy/grassy slope between Gotenba and Subashiri parking lots as a training hill.

Scientists have identified four distinct phases of volcanic activity in the formation of Mount Fuji. The first phase, called Sen-komitake, is composed of an andesite core recently discovered deep within the mountain. Sen-komitake was followed by the "Komitake Fuji," a basalt layer believed to be formed several hundred thousand years ago. Approximately 100,000 years ago, "Old Fuji" was formed over the top of Komitake Fuji. The modern, "New Fuji" is believed to have formed over the top of Old Fuji around 10,000 years ago.[41]

The volcano is currently classified as active with a low risk of eruption. The last recorded eruption was the Hōei eruption which started on December 16, 1707 (Hōei 4, 23rd day of the 11th month) and ended about January 1, 1708 (Hōei 4, 9th day of the 12th month) during the Edo period.[42] The eruption formed a new crater and a second peak (named Hōei-zan after the Hoei era) halfway down its side. Fuji spewed cinders and ash which fell like rain in Izu, Kai, Sagami, and Musashi.[43] Since then, there have been no signs of an eruption. In the evening of March 15, 2011, there was a magnitude 6.2 earthquake at shallow depth a few kilometres from Mount Fuji on its southern side. But according to the Japanese Meteorological Service there was no sign of any eruption.[44]

Mount Fuji from the sky and geology