Qilin
For the county in Yunnan, see Qilin District. 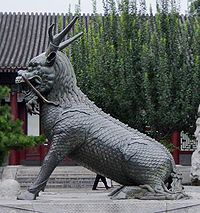 A qilin of the Qing dynasty in Beijing's Summer Palace 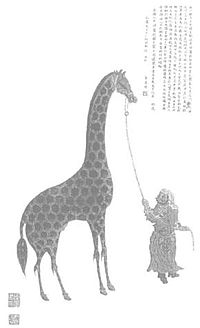 A painting by the court artist depicting one of Zheng He's giraffes in 1414. The painting was titled "Qilin Brings Serenity (rui) Ode"

The Qilin (Chinese: 麒麟, alternatively 騏驎; pinyin: qílín; Wade–Giles: ch'i-lin) is a mythical hooved Chinese chimerical creature known throughout various East Asian cultures, and is said to appear with the imminent arrival or passing of a wise sage or an illustrious ruler.[1] It is a good omen that brings rui (Chinese: 瑞; pinyin: ruì; roughly translated as "serenity" or "prosperity"). It is often depicted with what looks like fire all over its body. It is sometimes misleadingly called the "Chinese unicorn" due to conflation with the unicorn by Westerners.

The earliest references to the Qilin are in the 5th century BC book Zuo Zhuan.[2][3] The Qilin made appearances in a variety of subsequent Chinese works of history and fiction.

In legend, the Qilin became tiger-like after their disappearance in real life and become a stylised representation of the giraffe in Ming Dynasty.[4][5] The identification of the Qilin with giraffes began after Zheng He's voyage to East Africa (landing, among other places, in modern-day Kenya). Zheng He's fleet brought back two giraffes to Beijing, and they were referred to as "Qilins".[6] The Emperor proclaimed the giraffes magical creatures, whose capture signalled the greatness of his power.

The identification between the Qilin and the giraffe is supported by some attributes of the Qilin, including its vegetarian and quiet nature. Its reputed ability to "walk on grass without disturbing it" may be related to the giraffe's long, thin legs. Also the Qilin is described as having antlers like a deer and scales like a dragon or fish; since the giraffe has horn-like "ossicones" on its head and a tessellated coat pattern that looks like scales it is easy to draw an analogy between the two creatures. The identification of Qilin with giraffes has had lasting implications; even today, the giraffe is called girin (기린) by the Koreans and kirin (キリン) by the Japanese.

It is unlikely that giraffes and Qilin were regarded as the same creature in pre-modern times however. For example, typical depictions of the Qilin have much shorter necks than giraffes. 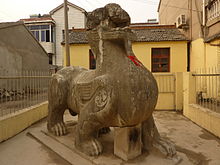 A qilin from the spirit way of the Emperor Wu of the Liu Song Dynasty (ca. 422)

There are many different ways Qilin have been described. Some think of them as a rare form of unicorn; others have described it as a creature that has the head of a dragon and a body of tiger with scales. Others see it as a creature with a single horn on its forehead, a multicolored back, the hooves of a horse, the body of a deer, and with the tail of an ox.

Although it looks fearsome, the Qilin only punishes the wicked. It can walk on grass yet not trample the blades, and it can also walk on water. As it is a peaceful creature, its diet does not include flesh. It takes great care when it walks never to harm or tread on any living thing, and it is said to appear only in areas ruled by a wise and benevolent leader (some say even if this area is only a house). It is normally gentle but can become fierce if a pure person is threatened by a sinner, spouting flames from its mouth and exercising other fearsome powers that vary from story to story.

Legends tell that the Qilin has appeared in the garden of the legendary Huangdi and in the capital of Emperor Yao. Both events bore testimony to the benevolent nature of the rulers. It's been told in legends that the birth of the great sage Confucius was fortold by the arrival of a Qilin.[1]

Some stories state that the Qilin is a sacred pet (or familiar) of the deities. Therefore, in the hierarchy of dances performed by the Chinese (Lion Dance, Dragon Dance, etc.), the Qilin ranks highly; third only to the Dragon and Phoenix who are the highest.

In the Qilin Dance, movements are characterised by fast, powerful strokes of the head. The Qilin Dance is often regarded as a hard dance to perform due to the weight of the head, stances and the emphasis on "fǎ jìn" (Chinese: 法勁) — outbursts of strength/power/energy.

Qilin are thought to be a symbol of good omens, protection, prosperity, success, and longevity by the Chinese.

A bronze Qilin figure, brought back by local Horsham explorers Charles and Emma Henderson who travelled to the Far East in the 1880s and 1890s, [7] is displayed in the Ethnography gallery in Horsham Museum, Horsham, United Kingdom. It was used as an incense burner with smoke pouring from the mouth. [8] 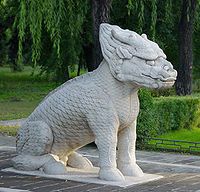 A Qilin in the dragon, fish, and ox style of the Ming Dynasty. Note the pair of horns. 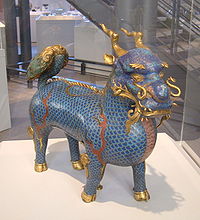 There are variations in the appearance of the qilin, even in historical China, owing to cultural differences between dynasties and regions.

In the Ming dynasty (1368–1644) of China the Qilin is represented as an oxen-hooved animal with a dragon-like head surmounted by a pair of horns and flame-like head ornaments.

The Qilin of China's subsequent Manchu Qing dynasty (1644–1911) is a fanciful animal. Depictions of the Qilin show a creature with the head of a dragon, the antlers of a deer, the skin and scales of a fish, the hooves of an ox and tail of a lion.

In Japan, the Qilin is called Kirin (i.e. 麒麟 in Kanji) in Japanese, which has also come to be used in the modern Japanese word for a giraffe. The Japanese art tends to depict the Qilin as more deer-like than in Chinese art. Alternatively, it is depicted as a dragon shaped like a deer, but with an ox's tail[9] instead of a lion's tail. The Kirin Brewery Company, Ltd. is named after the animal, and uses a picture of one in its labels. A monster from Monster Hunter videogames is named Kirin, an unicorn with thunderbolt-lightning-based attacks.

In the Post-Qin Chinese hierarchy of mythological animals, the Qilin is ranked as the third most powerful creature (after the dragon and phoenix), but in Japan, the Kirin occupies the top spot. This is following the style of the ancient Chinese, as Qilin was ranked higher than the Dragon or Phoenix before the Qin Dynasty. During the Zhou dynasty, the Qilin was ranked the highest, the Phoenix ranked second and the Dragon the third.[citation needed]

Name in other languages

The Qilin is also known in other languages as follows: