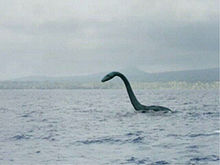 Reconstruction of an alleged Ogopogo sighting

Cryptozoology (from Greek κρυπτός, kryptos, "hidden" + zoology; literally, "study of hidden animals") refers to the search for animals whose existence has not been proven. This includes looking for living examples of animals that are considered extinct, such as dinosaurs; animals whose existence lacks physical evidence but which appear in myths, legends, or are reported, such as Bigfoot and Chupacabra;[1] and wild animals dramatically outside their normal geographic ranges, such as phantom cats or "ABCs" (an initialism commonly used by cryptozoologists that stands for Alien Big Cats).

The animals cryptozoologists study are often referred to as cryptids, a term coined by John Wall in 1983.[2]

Cryptozoology is not a recognized branch of zoology or a discipline of science.[1] It is an example of pseudoscience because it relies heavily upon anecdotal evidence, stories and alleged sightings.[3][4] [5] 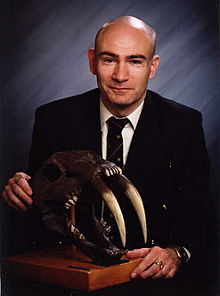 The coining of the word cryptozoology is often attributed to Belgian-French zoologist Bernard Heuvelmans, though Heuvelmans attributes coinage of the term to the late Scottish explorer and adventurer Ivan T. Sanderson.[6] Heuvelmans' 1955 book On the Track of Unknown Animals traces the scholarly origins of the discipline to Anthonie Cornelis Oudemans and his 1892 study, The Great Sea Serpent.[7] Heuvelmans argued that cryptozoology should be undertaken with scientific rigor, but with an open-minded, interdisciplinary approach. He also stressed that attention should be given to local, urban and folkloric sources regarding such creatures, arguing that while often layered in unlikely and fantastic elements, folktales can have small grains of truth and important information regarding undiscovered organisms. Phantom cats (an example of living animals supposedly found outside of their normal range) are a common subject of cryptozoological interest,[8] largely due to the relative likelihood of existence in comparison to fantastical cryptids lacking any evidence of existence, such as Mothman.[9][10]

Another notable book on the subject is Willy Ley's Exotic Zoology (1959). Ley was best known for his writings on rocketry and related topics, but he was trained in paleontology, and wrote a number of books about animals. Ley's collection Exotic Zoology is of some interest to cryptozoology, as he discusses the Yeti and sea serpents, as well as relict dinosaurs. The book entertains the possibility that some legendary creatures (like the sirrush, the unicorn or the cyclops) might be based on actual animals, through misinterpretation of the animals and/or their remains. Also notable is the work of British zoologist and cryptozoologist Karl Shuker, who has published 12 books and countless articles on numerous cryptozoological subjects since the mid-1980s. Loren Coleman, a modern popularizer of cryptozoology, has chronicled the history and personalities of cryptozoology in his books.[11] 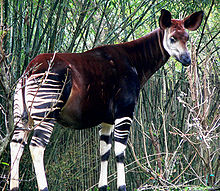 An Okapi at Walt Disney's Animal Kingdom, symbol of the defunct International Society of Cryptozoology

Cryptozoologists claim there have been cases where species now accepted by the scientific community were initially considered superstition, hoaxes, delusions or misidentifications.[2] The popularly reported European discovery of the okapi in 1901, earlier hinted at but unseen by Henry Morton Stanley in his travelogue of exploring the Congo, later became the emblem for the now defunct International Society of Cryptozoology. The mountain gorilla,[12] giant squid[13] and Hoan Kiem Turtle[14][15] are other examples of extant species that were brought to the attention of modern science but formerly thought to be cryptids.

The 2003 discovery of the fossil remains of Homo floresiensis was cited by paleontologist Henry Gee, editor of the journal Nature as possible evidence that humanoid cryptids like the Orang Pendek and yeti were "founded on grains of truth". "Cryptozoology", Gee said, "the study of such fabulous creatures, can come in from the cold."[16]

Cryptozoology has been criticised because of its reliance on anecdotal information[17] and because some cryptozoologists do not follow the scientific method[18][19] and devote a substantial portion of their efforts to investigations of animals that most scientists believe are unlikely to have existed.[20]

According to Mike Dash, a Welsh historian, few scientists doubt there are thousands of unknown animals, particularly invertebrates, awaiting discovery; however, cryptozoologists are largely uninterested in researching and cataloging newly-discovered species of ants or beetles, instead focusing their efforts towards "more elusive" creatures that have often defied decades of work aimed at confirming their existence.[20] The majority of mainstream criticism of cryptozoology is thus directed towards the search for megafauna cryptids such as Bigfoot, the Yeti, and the Loch Ness Monster, which appear often in popular culture, but for which there is little or no scientific support. Some scientists argue that megafauna cryptids are unlikely to exist undetected in great enough numbers to maintain a breeding population,[21] and are unlikely to be able to survive in their reported habitats due to issues of climate and food supply.[22]