Telepathy
For other uses, see Telepathy (disambiguation).
This article is about the paranormal phenomenon. For the magical act, see mentalism.

Telepathy (from the Greek τηλε, tele meaning "distant" and πάθη, pathe meaning "affliction, experience"),[2] is the induction of mental states from one mind to another. The term was coined in 1882 by the classical scholar Fredric W. H. Myers, a founder of the Society for Psychical Research,[1] and has remained more popular than the more-correct expression thought-transference.[1][3] Many studies seeking to detect, understand, and utilize telepathy have been done within this field. Claims of telepathy as a real phenomenon are at odds with the scientific consensus. According to the prevailing view among scientists, telepathy lacks replicable results from well-controlled experiments.[4][5]

Telepathy is a common theme in modern fiction and science fiction, with many superheroes and supervillains having telepathic abilities. In more recent times, neuroimaging has allowed researchers to actually perform early forms of mind reading.

Origins of the concept

According to Roger Luckhurst,[6] the origin of the concept of telepathy (not telepathy itself) in the Western civilization can be tracked to the late 19th century. In his view, science did not frequently concern itself with "the mind" prior to this. As the physical sciences made significant advances, scientific concepts were applied to mental phenomena (e.g., animal magnetism), with the hope that this would help understand paranormal phenomena. The modern concept of telepathy emerged in this historical context.

The notion of telepathy is not dissimilar to two psychological concepts: delusions of thought insertion/removal and psychological symbiosis. This similarity might explain how some people have come up with the idea of telepathy. Thought insertion/removal is a symptom of psychosis, particularly of schizophrenia or schizoaffective disorder. Psychiatric patients who experience this symptom falsely believe that some of their thoughts are not their own and that others (e.g., other people, aliens, or conspiring intelligence agencies) are putting thoughts into their minds (thought insertion). Some patients feel as if thoughts are being taken out of their minds or deleted (thought removal). Along with other symptoms of psychosis, delusions of thought insertion may be reduced by antipsychotic medication.

Psychological symbiosis, on the other hand, is a less well established concept. It is an idea found in the writings of early psychoanalysts, such as Melanie Klein. It entails the belief that in the early psychological experience of the child (during earliest infancy), the child is unable to tell the difference between his or her own mind, on one hand, and his or her experience of the mother/parent, on the other hand. This state of mind is called psychological symbiosis; with development, it ends, but, purportedly, aspects of it can still be detected in the psychological functioning of the adult. Putatively, the experience of either thought insertion/removal or unconscious memories of psychological symbiosis may have led to the invention of "telepathy" as a notion and the belief that telepathy exists. Psychiatrists and clinical psychologists believe and empirical findings support the idea that people with schizotypal personality disorder are particularly likely to believe in telepathy.[7]

Within the field of parapsychology, telepathy is considered to be a form of extra-sensory perception (ESP) or anomalous cognition in which information is transferred through Psi. It is often categorized similarly to precognition and clairvoyance.[8] Various experiments have been used to test for telepathic abilities. Among the most well known are the use of Zener cards and the Ganzfeld experiment.

Zener cards are cards marked with five distinctive symbols. When using them, one individual is designated the "sender" and another the "receiver". The sender must select a random card and visualize the symbol on it, while the receiver must attempt to determine that symbol using Psi. Statistically, the receiver has a 20% chance of randomly guessing the correct symbol, so in order to demonstrate telepathy, they must repeatedly score a success rate that is significantly higher than 20%.[9] If not conducted properly, this method can be vulnerable to sensory leakage and card counting.[9]

When using the Ganzfeld experiment to test for telepathy, one individual is designated the receiver and is placed inside a controlled environment where they are deprived of sensory input, and another is designated the sender and is placed in a separate location. The receiver is then required to receive information from the sender. The exact nature of the information may vary between experiments.[10]

Latent Telepathy, formerly known as "deferred telepathy",[11] is described as being the transfer of information, through Psi, with an observable time-lag between transmission and receipt.[3]

Retrocognitive, Precognitive, and Intuitive Telepathy is described as being the transfer of information, through Psi, about the past, future or present state of an individual's mind to another individual.[3]

Emotive Telepathy, also known as remote influence [12] or emotional transfer, is the process of transferring kinesthetic sensations through altered states.

Superconscious Telepathy, involves tapping into the superconscious [13] to access the collective wisdom of the human species for knowledge.

Parapsychologists and skeptics agree that many of the instances of more popular psychic phenomena, such as mediumism, can be attributed to non-paranormal techniques such as cold reading.[17][18][19] Magicians such as Ian Rowland and Derren Brown have demonstrated techniques and results similar to those of popular psychics, without paranormal means. They have identified, described, and developed psychological techniques of cold reading and hot reading.

A technique which shows statistically significant evidence of telepathy on every occasion has yet to be discovered. This lack of reliable reproducibility has led skeptics to argue that there is no credible scientific evidence for the existence of telepathy at all.[20] Skeptics also point to historical cases in which flaws in experimental design and occasional cases of fraud were uncovered.[20]

Telepathy is commonly used in fiction, with a number of superheroes and supervillains, as well as figures in many science fiction novels, etc., use telepathy. Notable fictional telepaths include the Jedi in Star Wars. The mechanics of telepathy in fiction vary widely. Some fictional telepaths are limited to receiving only thoughts that are deliberately sent by other telepaths, or even to receiving thoughts from a specific other person. For example, in Robert A. Heinlein's 1956 novel Time for the Stars, certain pairs of twins are able to send telepathic messages to each other. In A. E. van Vogt's science fiction novel Slan, the mutant hero Jommy Cross can read the minds of ordinary humans. Some telepaths can read the thoughts only of those they touch, such as Vulcans in the Star Trek media franchise. Star Trek science consultant and writer André Bormanis, has revealed that telepathy within the Star Trek universe works via the "psionic field." According to Bormanis, a psionic field is the "medium" through which unspoken thoughts and feelings are communicated through space.[21] Some humanoids can tap into this field through a kind of sense organ located in the brain; in the same manner that human eyes can sense portions of the electromagnetic field, telepaths can sense portions of the psionic field. In the book "Eragon", Eragon can communicate through his mind with almost anyone, including his dragon Saphira, but it is possible to block people from one's mind with a barrier. In the Harry Potter series by J. K. Rowling, telepathy is a magical skill known as Legilimency. In the John Wyndham novel The Chrysalids, the main character and narrator David Strorm is one of a group of nine telepaths. In Anthony Horowitz's Power of Five series twins Jamie and Scott Tyler were born with telepathic powers that enable them to read people's minds and, ultimately, control them. They always know each other's thoughts, which earns them money doing tricks at a circus in Reno, Nevada, USA.

Some writers view telepathy as the evolutionary destiny of humanity. In Tony Vigorito's novel, Just a Couple of Days, telepathy emerges across the entire human species as a result of the Pied Piper Virus, which inadvertently eliminates humanity's symbolic capacity. In this instance, telepathy is seen as a latent ability that emerges only when the distractions of language are bypassed.

Some fictional telepaths possess mind control abilities, which can include "pushing" thoughts, feelings, or hallucinatory visions into the mind of another person, causing pain, paralysis, or unconsciousness, altering or erasing memories, or completely taking over another person's mind and body (similar to spiritual possession). Examples of this type of telepath include Professor Xavier, Psylocke, Jean Grey, Emma Frost, and numerous other characters in the Marvel Universe, along with Matt Parkman from the television series Heroes.

The radio crimefighter The Shadow had "the power to cloud men's minds," which he used to mask his presence from others.

The film Scanners concerns around people born with this kind of telepathy as well as those with telekinetic abilities.

The Urdu novel "Devta" is based on the character of Farhad Ali Taimur, a telepath involved in the fight of good and evil.

Technological enabled mental connections (occasionally seen as a form of 'telepathy' as in the following section, but not usually described using this word) are also present in science fiction, often involving the usage of neural implants of some description. For example, Robert Silverberg's 1971 story Tower of Glass features a technology called a "shunt room" where participants wearing "shunt helmets" are able to probe one another's thoughts, feelings and memories. Another example is the Conjoiners in the Revelation Space series by Alastair Reynolds. Conjoiners rely on their technological telepathy (referred to by them as "Transenlightenment") to the extent that they no longer actually speak. Certain Conjoiners are able to read, attack and control the minds of other Conjoiners and machines (though not standard humans) using digital attacks, often having similar effects to other telepaths in fiction. More generally, the concept of technological mental connections quite often features in science fiction stories featuring group minds, such as the Borg in Star Trek.

See also a composite list of fictional characters with telepathy. 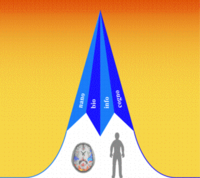 Recent BCI toys like those developed by NeuroSky have brought real life telepathy to the general public. The MindFlex made by Mattel in collaboration with NeuroSky was even ranked in Time Magazines top 100 toys of all time [22] [23]. In this game the player floats a ball by concentrating on it; an electroencephalogram is used to judge the persons level of concentration through direct measurement of the electrical activity in their brain, this headset then communicates with a platform controlling the speed of a fan and thus the ball. [24][25]

In 2011 a Guinness Book of World Records category was created for BCI based telepathy. The NeuroSky MindWave was awarded it for the, “Heaviest machine moved using a brain control interface”.[26]

Some people, occasionally referred to by themselves or others as "transhumanists", believe that technologically enabled telepathy is a technology that humans should pursue in order to improve themselves.

Kevin Warwick of the University of Reading, England is one of the leading proponents of this view and has based all of his recent cybernetics research around developing technology for directly connecting human nervous systems together with computers and with each other. He believes techno-enabled telepathy will in the future become the primary form of human communication.[27][28]