Animal magnetism (French: magnétisme animal; Latin: magnetismus animalis), in modern usage, refers to a person's sexual attractiveness or raw charisma. As postulated by Franz Mesmer in the 18th century, the term referred to a supposed magnetic fluid or ethereal medium believed to reside in the bodies of animate beings (i.e., those who breathe). The term is translated from Mesmer's magnétisme animal. Mesmer chose the word animal to distinguish his supposed vital magnetic force from those referred to at that time as "mineral magnetism", "cosmic magnetism" and "planetary magnetism". The theory became the basis of treatment in Europe and the United States that sometimes depended on "laying on of hands," and was popular into the nineteenth century.

A tendency emerged amongst British magnetizers to call their clinical techniques mesmerism; they wanted to distance themselves from the theoretical orientation of animal magnetism that was based on the concept of "magnetic fluid". At the time, some magnetizers attempted to channel what they thought was a magnetic "fluid"; and, sometimes, they attempted this with the "laying on of hands". Reported effects included various feelings: intense heat, trembling, trances, and seizures.[1]

Many practitioners came from a scientific basis, such as Joseph Philippe François Deleuze (1753–1835), a French physician, anatomist, and gynecologist. One of his pupils was Théodore Léger (1799–1853), who wrote that the label "mesmerism" was "most improper."[2] (Léger moved to Texas around 1836.)

Noting that, by 1846, the term Galvanism had been replaced by electricity, Léger wrote that year:

MESMERISM, of all the names proposed [to replace the term animal magnetism], is decidedly the most improper; for, in the first place, no true science has ever been designated by the name of a man, whatever be the claims he could urge in his favor; and secondly, what are the claims of Mesmer for such an honor? He is not the inventor of the practical part of the science, since we can trace the practice of it through the most remote ages; and in that respect, the part which he introduced has been completely abandoned. He proposed for it a theory which is now [viz., 1846] exploded, and which, on account of his errors, has been fatal to our progress. He never spoke of the phenomena which have rehabilitated our cause among scientific men; and since nothing remains to be attributed to Mesmer, either in the practice and theory, or the discoveries that constitute our science, why should it be called MESMERISM?[3]

Whilst the Commission agreed that the cures claimed by Mesmer were indeed cures[citation needed], the commission also concluded there was no evidence of the existence of his magnetic fluid, and that its effects derived from either the imaginations of its subjects or through charlatanry.[citation needed]. After a few years, due to the fact that the ruling passed by the first commission was subject of heated discussions, and magnetism was actually accepted in other important European nations like Germany, in its specific case, too, as a result of the examination carried out by a commission (which displayed however a positive attitude) a second commission was set up. The second commission, headed by Husson, worked for six years, and in 1831 it conceded the veracity of most of the phenomena which the magnetists spoke of, in addition, of course, to the reality of the very phenomenon of induction in conformity with magnetic practices. It thereby gave rise to a lively debate. As the academic Institution was dissatisfied with the result produced by the second commission, a third commission, chaired by Dubois d'Amiens, was established. This commission worked for a few months only, since no agreement on the protocols governing the relevant experimental trials could be struck. Such third commission passed a partially unfavourable judgment on the few experiments it conducted includinding anesthesia that it found to be partial. It ought to be noted that this commission has thus only been in operation for a few months and with a single experimenter (dr. Berna), whereas the previous, Husson-led commission, has examined the facts for six consecutive years. [4] 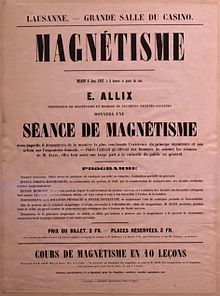 Abbé Faria was one of the disciples of Franz Anton Mesmer who continued with Mesmer’s work following the conclusions of the Royal Commission. In the early 19th century, Abbé Faria introduced oriental hypnosis to Paris. Faria conducted experiments to prove that “no special force was necessary for the production of the mesmeric phenomena such as the trance, but that the determining cause lay within the subject himself;” in other words, that it worked purely by the power of suggestion.[5]

The vital fluid and the practice of animal magnetism

A 1791 London publication explains the Mesmer’s theory of the vital fluid :

“Modern philosophy has admitted a plenum or universal principle of fluid matter, which occupies all space; and that as all bodies moving in the world, abound with pores, this fluid matter introduces itself through the interstices and returns backwards and forwards, flowing through one body by the currents which issue therefrom to another, as in a magnet, which produces that phenomenon which we call Animal Magnetism. This fluid consists of fire, air and spirit, and like all other fluids tends to an equilibrium, therefore it is easy to conceive how the efforts which the bodies make towards each other produce animal electricity, which in fact is no more than the effect produced between two bodies, one of which has more motion than the other; a phenomenon serving to prove that the body which has most motion communicates it to the other, until the medium of motion becomes an equilibrium between the two bodies, and then this equality of motion produces animal electricity.” [7]

According to an anonymous writer of a series of letters published by the editor John Pearson in 1790, animal magnetism can cause a wide range of effects ranging from vomiting to what is termed the “crisis.” The purpose of the treatment (the crisis) was to shock the body into convulsion in order to remove obstructions in the circulatory system that was causing sicknesses.[8] Furthermore, the anonymous supporter of animal magnetism purported that the crisis created two effects: a hypnotic state in which the patient was “possessed of his senses, yet cease to be an accountable creature,” and “unobstructed vision” to see through objects.[9] A patient under crisis was believed to be able to see through the body and find the cause of illness in themselves or in other patients.

The Marques of Puységur’s miraculous healing of a young man named Victor in 1784 supported the treatment of the crisis. The Marques was able to hypnotize Victor and while hypnotized, Victor was said to have been able to speak articulately and diagnose his own sickness.

Social skepticism in the Romantic Era

The popularization of animal magnetism was denounced and ridiculed by newspaper journals and theatre during the Romantic Era. Many deemed animal magnetism to be nothing more than a theatrical falsity or quackery. In a 1790 publication, an editor presented a series of letters written by an avid supporter of animal magnetism and included his own thoughts in an appendix stating: "No fanatics ever divulged notions more wild and extravagant; no impudent empiric ever retailed promises more preposterous, or histories of cures more devoid of reality, than the tribe of Magnetisers." [13]

The novelist and playwright Elizabeth Inchbald wrote the farce Animal Magnetism in the late 1780s. The plot revolved around multiple love triangles and the absurdity of animal magnetism. The following passage mocks the medical prowess of those qualified only as Mesmerists:

Doctor: They have refused to grant me a diploma—forbid me to practice as a physician, and all because I don't know a parcel of insignificant words; but exercise my profession according to the rules of reason and nature; Is it not natural to die, then if a dozen or two of my patients have died under my hands, is not that natural? …[14]

Although the Doctor's obsession with the use of animal magnetism, not merely to cure but to force his ward to fall in love with him, made for a humorous storyline, Inchbald’s light-hearted play commented on what society perceived as threats posed by the practice.

Dr De Mainanduc brought animal magnetism to England in 1787 and promulgated it into the social arena. In 1785, he had published proposals to the ladies of Britain to establish a "Hygean Society" or Society of Health, by which they would pay to join and enjoy his treatments.[15] As both popularity and skepticism increased, many became convinced that animal magnetism could lead to sexual exploitation of women. Not only did the practice involve close personal contact via the waving of hands over the body, but people were concerned that the animal magnetists could hypnotize women and direct them at will.

“William Pitt, the great political Animal Magnetist,…has most foully worked on the diseased fancy of Englishmen …thrown the nation into a feverish slumber, and is now bringing it to a crisis which may convulse mortality!” [16]

Major politicians and people in power were accused by radicals to be practicing animal magnetism on the general population.

In his article “Under the Influence: Mesmerism in England”, Roy Porter notes that James Tilly Matthews suggested that the French were infiltrating England via animal magnetism. Matthews believed that “magnetic spies” would invade England and bring it under subjection by transmitting waves of animal magnetism to subdue the government and people.[17] Such an invasion from foreign influences was perceived as a radical threat.

Today scholars believe Mesmerism to share a concept of life force or energy with such Asian practices such as reiki and qigong. The practical and theoretical positions of such practices are on whole substantially different from those of mesmerism.

During the Romantic period, Mesmerism produced enthusiasm and inspired horror in the spiritual and religious context. Though discredited as a credible medical practice by many, mesmerism created a venue for spiritual healing. Some animal magnetists advertised their practices by stressing the “spiritual rather than physical benefits to be gained from animal magnetism” and were able to gather a good clientele from among the spiritually inspired population.[18]

A chapter of the Christian Science textbook, Science and Health with Key to the Scriptures, is entitled "Animal Magnetism Unmasked". In it, the book's author, Mary Baker Eddy, says about "the workings of animal magnetism" that "its effects upon those who practise [sic] it, and upon their subjects who do not resist it, lead to moral and to physical death."[19].