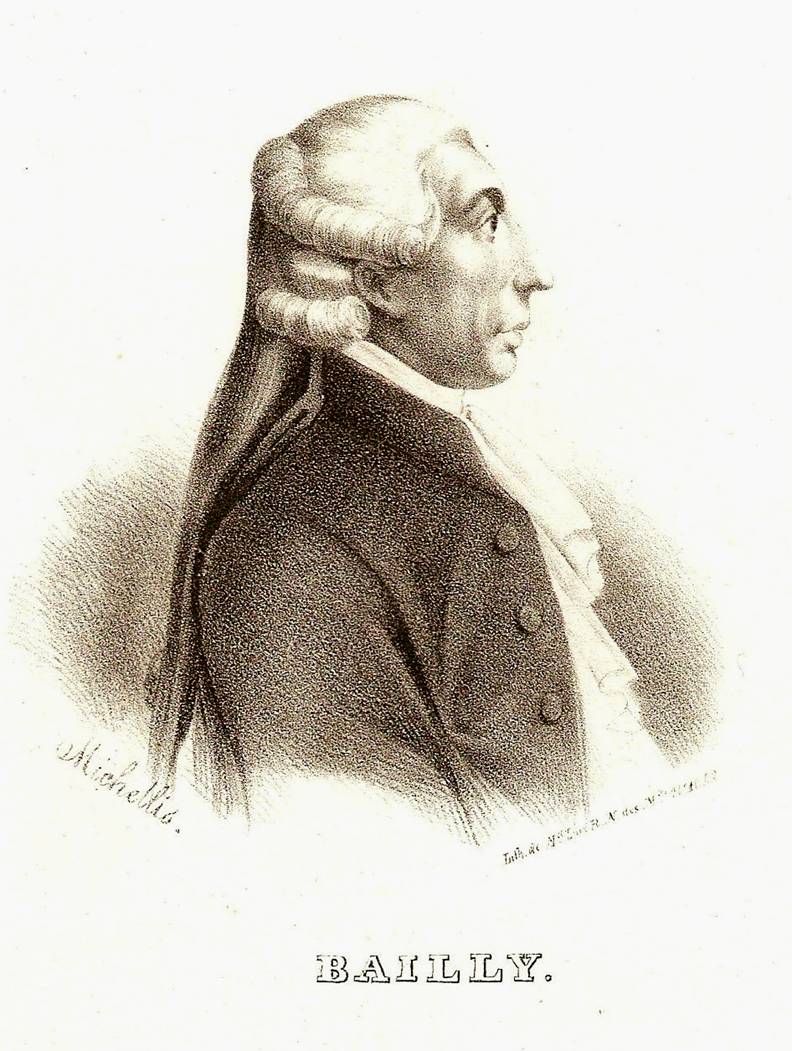 Jean-Sylvain Bailly (, &ndash;, ) was a French astronomer and , one of the leaders of the early part of the . He was ultimately d during the .

Born in , he was originally intended for the profession of a painter, but preferred writing tragedies, until attracted to science by the influence of . He calculated an orbit for Halley's Comet when it appeared in 1759, reduced Lacaille's observations of 515 al stars, and was, in 1763, elected a member of the . His "Essai sur la theorie des s de Jupiter" ("Essay on the theory of the satellites of Jupiter", 1766), an expansion of a memoir presented to the Academy in 1763, showed much original power; and it was followed up in 1771 by a noteworthy dissertation "Sur les inegalites de la lumiere des satellites de Jupiter" ("On the inequalities of light of the satellites of Jupiter").

Meantime, he had gained a high literary reputation by his "Éloges" of King , Lacaille, , and , which were issued in collected form in 1770 and 1790; he was admitted to the on , , and to the Académie des Inscriptions in 1785, when 's simultaneous membership of all three Academies was renewed in him. From then on, he devoted himself to the , publishing successively: "Histoire de l'astronomie ancienne" ("A history of ancient astronomy", 1775); "Histoire de l'astronomie moderne" ("A history of modern astronomy", 3 vols., 1779-1782); "Lettres sur l'origine des sciences" ("Letters on the origin of the sciences", 1777); "Lettres sur" "l" Atlantide "de Platon" ("Letters on 's "Atlantide" ", 1779); and "Traite de l'astronomie indienne et orientale" ("A treatise on Indian and Oriental astronomy", 1787). The 1911 "Encyclopædia Britannica" remarks that "Their erudition was… marred by speculative extravagances."

During the French Revolution

The Revolution interrupted his studies. Elected deputy from Paris to the Estates-General, he was elected president of the (, ), led the famous proceedings in the Tennis Court(), and - immediately after the - became the first under the newly adopted system of the "Commune" (, 1789 to , ). One of his actions in this position was to secure, with others, and in the face of threats and ridicule, the passage of a decree of Sept. 27, 1791 (confirmed Nov. 30 of the same year), which declared Jews to be French citizens, with all rights and privileges. This decree repealed the special taxes that had been imposed on the Jews, as well as all the ordinances existing against them.

The dispersal by the National Guard, under his orders, of the riotous assembly in the (, ) made him unpopular, and he retired to , where he composed his "Mémoires d'un témoin" (published in 3 vols. by MM. Berville and Barrière, 1821-1822), an incomplete narrative of the extraordinary events of his public life. Late in 1793, Bailly left Nantes to join his friend at , but was there recognized, arrested and brought () before the at Paris. On he was guillotined amid the insults of a howling mob. In the words of the 1911 "Encyclopædia Britannica", "He met his death with patient dignity; having, indeed, disastrously shared the enthusiasms of his age, but taken no share in its crimes."

The Bailly was named in his honour.