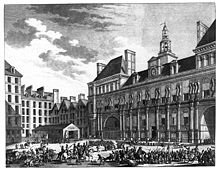 The Paris Commune during the French Revolution was the government of Paris from 1789 until 1795. Established in the Hôtel de Ville just after the storming of the Bastille, the Commune became insurrectionary in the summer of 1792, essentially refusing to take orders from the central French government.

The first mayor was Jean Sylvain Bailly; he was succeeded on November 1791 by Pétion de Villeneuve after Bailly's unpopular use of the National Guard to disperse a riotous assembly in the Champ de Mars (17 July 1791).

In 1792, the Commune was dominated by those Jacobins who were not in the Legislative Assembly due to the Self-Denying Ordinance.

On the night of 9 August 1792 a new revolutionary Commune took possession of the Hôtel de Ville; the next day insurgents assailed the Tuileries, where the royal family resided. During the ensuing constitutional crisis, the collapsing Legislative Assembly of France was heavily dependent on the Commune for the effective power that allowed it to continue to function as a legislature. The all-powerful Commune demanded custody of the royal family, imprisoning them in the Temple fortress. A list of "opponents of the Revolution" was drawn up, the gates to the city were sealed, and on 28 August the citizens were subjected to domiciliary visits, ostensibly in a search for muskets. By the evening of the 31st, every prison in Paris was full to overflowing, and on 2 September the massacres in the prisons commenced.