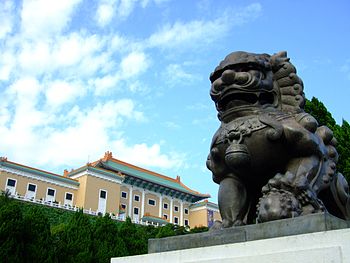 Guardian lion at the National Palace Museum in Taipei

Chinese guardian lions, known as Shishi lions (Chinese: 石獅; pinyin: shíshī; literally "stone lion") or Imperial guardian lion, and often incorrectly called "Foo Dogs" in the West, are a common representation of the lion in pre-modern China. They have traditionally stood in front of Chinese Imperial palaces, Imperial tombs, government offices, temples, and the homes of government officials and the wealthy, from the Han Dynasty (206 BC-AD 220), and were believed to have powerful mythic protective benefits. Pairs of guardian lions are still common decorative and symbolic elements at the entrances to restaurants, hotels, supermarkets and other structures, with one sitting on each side of the entrance, in China and in other places around the world where the Chinese people have immigrated and settled, especially in local Chinatowns. 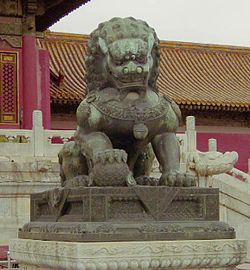 A Ming Dynasty Shishi in the Forbidden City 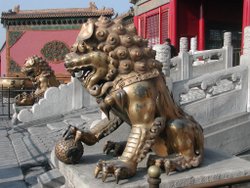 A Qing-era guardian lion pair within the Forbidden City. Note the different appearance of the face and details in the decorative items, compared to the earlier Ming version

The lions are always created in pairs, with the male resting his paw upon the world and the female restraining a playful cub that is on its back. They occur in many types of Chinese pottery and in Western imitations.[1] 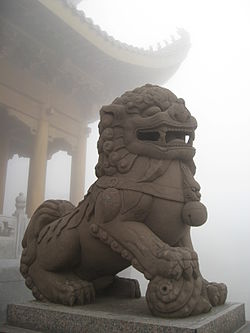 A statue of a Shishi looking over Mount Emei, China

In English and several Western languages, the guardian lions are often referred in a multitude of name such as: "Fu Dogs",[2] "Foo Dogs", "Fu Lions", "Fo Lions", and "Lion Dogs".[3] The term "Fo" or "Fu" may be transliterations to the words 佛 (pinyin: fó) or 福 (pinyin: fú), which means "buddha" or "prosperity" in Chinese, respectively. However, Chinese reference to the guardians lion are seldom prefixed with 佛 or 福, and more importantly never referred to as "dogs".

Reference to guardian lions as dogs in Western cultures may be due to the Japanese reference to them as "Korean dogs" (狛犬・高麗犬) due to their transmission from China through Korea into Japan. It may also be due to the misidentification of the guardian lion figures as representing certain Chinese dog breeds such as the Chow Chow (鬆獅犬, Pinyin: sōngshī quǎn, lit. "puffy-lion dog") or Shih Tzu (獅子狗; Pinyin: Shīzi Gǒu, lit. "lion dog").

The lions are traditionally carved from decorative stone, such as marble and granite or cast in bronze or iron. Because of the high cost of these materials and the labor required to produce them, private use of guardian lions was traditionally reserved for wealthy or elite families. Indeed, a traditional symbol of a family's wealth or social status was the placement of guardian lions in front of the family home. However, in modern times less expensive lions, mass produced in concrete and resin, have become available and their use is therefore no longer restricted to the elite.

The lions are always presented in pairs, a manifestation of yin and yang, the female representing yin and the male yang. The male lion has its right front paw on an embroidered ball called a "xiù qiú" (绣球), which is sometimes carved with a geometric pattern known in the West as the "Flower of life" The female is essentially identical, but has a cub under the closer (left) paw to the male, representing the cycle of life. Symbolically, the female fu lion protects those dwelling inside, while the male guards the structure. Sometimes the female has her mouth closed, and the male open. This symbolizes the enunciation of the sacred word "om". However, Japanese adaptions state that the male is inhaling, representing life, while the female exhales, representing death. Other styles have both lions with a single large pearl in each of their partially opened mouths. The pearl is carved so that it can roll about in the lion's mouth but sized just large enough so that it can never be removed.

According to feng shui, correct placement of the lions is important to ensure their beneficial effect. When looking out of a building through the entrance to be guarded, looking in the same direction as the lions, the male is placed on the left and the female on the right. So when looking at the entrance from outside the building, facing the lions, the male lion with the ball is on the right, and the female with the cub is on the left.

The Asiatic lions were once quite common throughout its historic range in Southwest and Central Asia and are believed to be the ones depicted by the guardian lions in Chinese culture.[4] With increased trade during the Han dynasty and cultural exchanges through the Silk road, lions were introduced into China from the ancient states of Central Asia by peoples of Sogdiana, Samarkand, and the Yuezhi (月氏) in the form of pelts and live tribute, along with stories about them from Buddhist priests and travelers of the time.[5] This exchange can be seen in that the Chinese word for lion is "Shi" (師, later 獅/狮), which shares the same etymological roots as "Shiar" (شیر), the Persian language name for the animal.

Several instances of lions as imperial tributes from Central Asia was recorded in the document Book of the Later Han (後漢書) written from 25-220CE. On one particular event, on the eleventh lunar month of 87 CE, "... an envoy from Parthia offered as tribute a lion and an ostrich"[6] to the Han court. Indeed the lion was associated by the Han Chinese to earlier venerated creatures of the ancient Chinese, most notably by the monk Huilin (琳说) who stated that "the mythic suanni (狻猊) is actually the lion, coming from the Western Regions" (狻猊即狮子也，出西域).

The Buddhist version of the Lion was originally introduced to Han China as the protector of dharma and these lions have been found in religious art as early as 208 BC. Gradually they were incorporated as guardians of the Chinese Imperial dharm. Lions seemed appropriately regal beasts to guard the emperor's gates and have been used as such since. There are various styles of guardian lions reflecting influences from different time periods, imperial dynasties, and regions of China. These styles vary in their artistic detail and adornment as well as in the depiction of the lions from fierce to serene.

Although the form of the Chinese guardian lion was quite varied during its early history in China, the appearance, pose, and accessories of the lions eventually became standardized and formalized during the Ming and Qing dynasties into more or less its present form.