Domus Aurea
This article is about the Roman Villa. For the Church in Antioch, see Domus Aurea (Antioch).

The Domus Aurea (Latin, "Golden House") was a large landscaped portico villa, designed to take advantage of artificially created landscapes built in the heart of Ancient Rome by the Emperor Nero after the Great Fire of Rome (64 AD) had cleared away the aristocratic dwellings on the slopes of the Palatine Hill.[1]

Built of brick and concrete in the few years between the fire and Nero's suicide in 68, the extensive gold-leaf that gave the villa its name was not the only extravagant element of its decor: stuccoed ceilings were applied with semi-precious stones and veneers of ivory while the walls were frescoed, coordinating the decoration into different themes in each major group of rooms.[2] Pliny the Elder watched it being built and mentions it in his Naturalis Historia.[3]

Suetonius claims this of Nero and the Domus Aurea:

When the edifice was finished in this style and he dedicated it, he deigned to say nothing more in the way of approval than that he was at last beginning to be housed like a human being.[4] 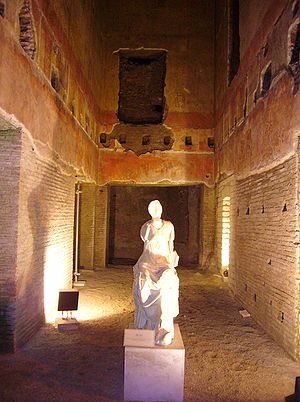 Statue of a muse in the newly reopened Domus Aurea.

Though the Domus Aurea complex covered parts of the slopes of the Palatine, Esquiline and Caelian hills, with a man-made lake in the marshy bottomlands, the estimated size of the Domus Aurea is an approximation, as much of it has not been excavated. Some scholars place it at over 300 acres (1.2 km2),[5] while others estimate its size to have been under 100 acres (0.40 km2).[6] Suetonius describes the complex as "ruinously prodigal" as it included groves of trees, pastures with flocks, vineyards and an artificial lake— rus in urbe, "countryside in the city". Nero also commissioned from the Greek Zenodorus a colossal 35.5 m (120 RF) high bronze statue of himself, the Colossus Neronis.[4] Pliny the Elder, however, puts its height at only 30.3 m (106.5 RF).[7] The statue was placed just outside the main palace entrance at the terminus of the Via Appia[4] in a large atrium of porticoes that divided the city from the private villa.[8] This statue may have represented Nero as the sun god Sol, as Pliny saw some resemblance.[9] This idea is widely accepted among scholars[10] but some are convinced that Nero was not identified with Sol while he was alive.[11] The face of the statue was modified shortly after Nero’s death during Vespasian’s reign to make it truly a statue of Sol.[11] Hadrian moved it, with the help of the architect Decrianus and 24 elephants,[12] to a position next to the Flavian Amphitheater. This building took the name "Colosseum" in the Middle Ages, after the statue nearby, or, as some historians believe, because of the sheer size of the building.

The Golden House was a party villa, as shown by the presence of 300 rooms without any sleeping quarter. Nero's own palace remained on the Quirinal Hill. Strangely, no kitchens or latrines have been discovered yet either.

Rooms sheathed in dazzling polished white marble were given richly varied floor plans, shaped with niches and exedras that concentrated or dispersed the daylight. There were pools in the floors and fountains splashing in the corridors. Nero took great interest in every detail of the project, according to Tacitus' Annals, and oversaw the engineer-architects, Celer and Severus, who were also responsible for the attempted navigable canal with which Nero hoped to link Misenum with Lake Avernus.[13] 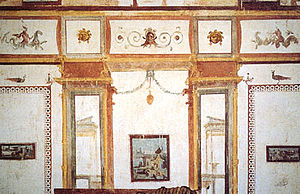 Some of the extravagances of the Domus Aurea had repercussions for the future. The architects designed two of the principal dining rooms to flank an octagonal court, surmounted by a dome with a giant central oculus to let in light.[1] It was an early use of Roman concrete construction. One innovation was destined to have an enormous influence on the art of the future: Nero placed mosaics, previously restricted to floors, in the vaulted ceilings. Only fragments have survived, but that technique was to be copied extensively, eventually ending up as a fundamental feature of Christian art: the apse mosaics that decorate so many churches in Rome, Ravenna, Sicily and Constantinople.

Celer and Severus also created an ingenious mechanism, cranked by slaves, that made the ceiling underneath the dome revolve like the heavens, while perfume was sprayed and rose petals were dropped on the assembled diners. According to some accounts, perhaps embellished by Nero's political enemies, on one occasion such quantities of rose petals were dropped that one unlucky guest was asphyxiated (a similar story is told of the emperor Elagabalus).

"Nero gave the best parties, ever," archaeologist Wallace-Hadrill told an interviewer when the Golden House was reopened to visitors in 1999 after being closed for years for restorations. "Three hundred years after his death, tokens bearing his head were still being given out at public spectacles - a memento of the greatest showman of them all." Nero, who was obsessed with his status as an artist, certainly regarded parties as works of art. His official party planner was Petronius.

Frescoes covered every surface that wasn't more richly finished. The main artist was one Famulus (or Fabulus according to some sources). Fresco technique, working on damp plaster, demands a speedy and sure touch: Famulus and his studio covered a spectacular amount of area. Pliny, in his Natural History, recounts how Famulus went for only a few hours each day to the Golden House, to work while the light was right. The swiftness of Famulus's execution gives a wonderful unity to his compositions and astonishing delicacy to their execution.

Pliny the Elder presents Amulius[14] as one of the principal painters of the domus aurea: "More recently, lived Amulius, a grave and serious personage, but a painter in the florid style. By this artist there was a Minerva, which had the appearance of always looking at the spectators, from whatever point it was viewed. He only painted a few hours each day, and then with the greatest gravity, for he always kept the toga on, even when in the midst of his implements. The Golden Palace of Nero was the prison-house of this artist's productions, and hence it is that there are so few of them to be seen elsewhere."[15] 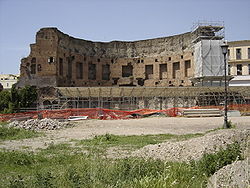 The Domus Aurea still lies under the ruins of the Baths of Trajan (shown here) and the surrounding park. 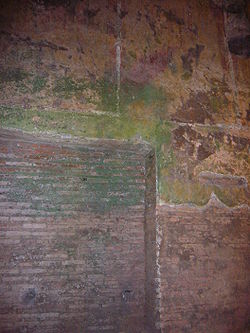 After Nero's death, the Golden House was a severe embarrassment to his successors. It was stripped of its marble, its jewels and its ivory within a decade. Soon after Nero’s death, the palace and grounds, encompassing 2.6 km² (c. 1 mi²), were filled with earth and built over: the Baths of Titus were already being built on part of the site in 79 AD. On the site of the lake, in the middle of the palace grounds, Vespasian built the Flavian Amphitheatre, which could be reflooded at will, with the Colossus Neronis beside it.[1] The Baths of Trajan,[1] and the Temple of Venus and Rome were also built on the site. Within 40 years, the Golden House was completely obliterated, buried beneath the new constructions, but paradoxically this ensured the wallpaintings' survival by protecting them from dampness.

When a young Roman inadvertently fell through a cleft in the Aventine hillside at the end of the 15th century, he found himself in a strange cave or grotta filled with painted figures. Soon the young artists of Rome were having themselves let down on boards knotted to ropes to see for themselves. The fourth style frescoes that were uncovered then have faded to pale gray stains on the plaster now, but the effect of these freshly rediscovered grottesche[16] decorations was electrifying in the early Renaissance, which was just arriving in Rome. When Pinturicchio, Raphael and Michelangelo crawled underground and were let down shafts to study them, carving their names on the walls to let the world know they had been there, the paintings were a revelation of the true world of antiquity. Beside the graffiti signatures of later tourists, like Casanova and the Marquis de Sade scratched into a fresco inches apart (British Archaeology June 1999), are the autographs of Domenico Ghirlandaio, Martin van Heemskerck, and Filippino Lippi.[17]

It was even claimed that various classical artworks found at this time - such as the Laocoön and his Sons and Venus Kallipygos - were found within or near the Domus's remains, though this is now accepted as unlikely (high quality artworks would have been removed - to the Temple of Peace, for example - before the Domus was covered over with earth).

The frescoes' effect on Renaissance artists was instant and profound (it can be seen most obviously in Raphael's decoration for the loggias in the Vatican), and the white walls, delicate swags, and bands of frieze — framed reserves containing figures or landscapes — have returned at intervals ever since, notably in late 18th century Neoclassicism, making Famulus one of the most influential painters in the history of art.

Discovery led to the arrival of moisture starting the slow, inevitable process of decay. Heavy rain was blamed in the collapse of a chunk of ceiling.[18]

Increasing concerns about the condition of the building and the safety of visitors resulted in its closing at the end of 2005 for further restoration work. The complex was partially reopened on February 6, 2007, but closed on March 25, 2008 because of safety concerns.

The likely remains of Nero's rotating banquet hall and its underlying mechanism were unveiled by archeologists on September 29, 2009.[19]

The current administrative division of central Rome places it in rione Monti.

The name Domus Aurea has in modern times come to signify wealth, opulence, and luxury. Commercial uses of the name have grown, ranging from luxury hotels to fine wines using the same name to market themselves to a segment of consumers that are aware of the historical significance as well as the indication of affluence that goes with the name Domus Aurea.