Neolithic architecture is the architecture of the Neolithic period. In Southwest Asia, Neolithic cultures appear soon after 10000 BC, initially in the Levant (Pre-Pottery Neolithic A and Pre-Pottery Neolithic B) and from there spread eastwards and westwards. There are early Neolithic cultures in Southeast Anatolia, Syria and Iraq by 8000 BC, and food-producing societies first appear in southeast Europe by 7000 BC, and Central Europe by c. 5500 BC (of which the earliest cultural complexes include the Starčevo-Koros (Cris), Linearbandkeramic, and Vinča). With very small exceptions (a few copper hatchets and spear heads in the Great Lakes region), the people of the Americas and the Pacific remained at the Neolithic level of technology up until the time of European contact. 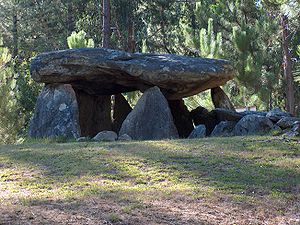 A dolmen at Couto Esteves, Portugal.

The Neolithic peoples in the Levant, Anatolia, Syria, northern Mesopotamia and Central Asia were great builders, utilising mud-brick to construct houses and villages. At Çatalhöyük, houses were plastered and painted with elaborate scenes of humans and animals. In Europe, long houses built from wattle and daub were constructed. Elaborate tombs for the dead were also built. These tombs are particularly numerous in Ireland, where there are many thousand still in existence. Neolithic people in the British Isles built long barrows and chamber tombs for their dead and causewayed camps, henges flint mines and cursus monuments. 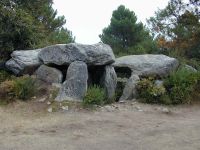 Most of the megaliths found in Western Europe and the Mediterranean were also erected in the Neolithic period. Perhaps the most famous megalithic structure is Stonehenge in England, although many others are known throughout the world. These monuments include both megalithic tombs, temples and structures of unknown (possibly religious or astronomical) purpose. The oldest known megalithic temple is Ggantija on Gozo Island.

Neolithic pile dwellings have been excavated in Sweden (Alvastra pile dwelling) and in the circum-Alpine area, with remains being found at the Mondsee and Attersee lakes in Upper Austria. Early archaeologists like Ferdinand Keller thought they formed artificial islands, much like the Scottish Crannogs, but today it is clear that the majority of settlements was located on the shores of lakes and were only inundated later on. Reconstructed pile dwellings are shown in open air museums in Unteruhldingen and Zurich (Pfahlbauland).

In Romania, Moldova, and Ukraine, Neolithic settlements included wattle-and-daub structures with thatched roofs and floors made of logs covered in clay. This is also when the burdei (below-ground) style of house construction was developed, which was still used by Romanians and Ukrainians up until the 20th Century.

The world's oldest known engineered roadway, the Sweet Track in England, also dates from this time.