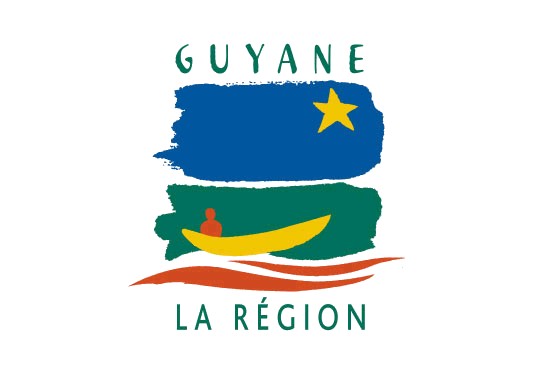 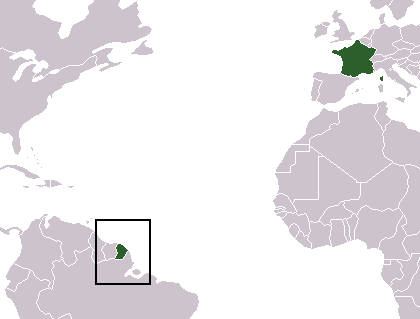 French Guiana ( _fr. Guyane française, officially _fr. "Guyane") is an (French: "département d'outre-mer, or DOM") of , located on the northern coast of . Like the other DOMs, French Guiana is also an of France, one of the 26 . It is an integral part of France, and its currency is the .

French Guiana was originally inhabited by a number of indigenous American peoples. Settled by the French during the 17th century, it was the site of penal settlements from 1852 until 1951, which were known in the English-speaking world as . A border dispute with Brazil arose in the late nineteenth century over a vast area of jungle, leading to the short-lived pro-French independent state of Counani in the disputed territory and some fighting between settlers, before the dispute was resolved largely in favour of Brazil by the arbitration of the Swiss government. In 1946, French Guiana became an of France. The 1970s saw the settlement of Hmong refugees from . A movement for increased autonomy from France gained momentum in the 1970s and 1980s. Protests by those calling for more autonomy have become increasingly vocal; demonstrations in 1996, 1997 and 2000 all ended in violence.

French Guiana, as part of France, is part of the , the largest part in an area outside , with one of the longest EU external boundaries. Along with the Spanish enclaves in Africa of and , it is one of only three European Union territories outside Europe that is not an island. Its is the President of the French Republic, who appoints a Prefect (resident at the Prefecture building in Cayenne) as his representative. There are two legislative bodies: the 19-member General Council and the 34-member Regional Council, both elected.

French Guiana has traditionally been conservative, though the socialist party has been increasingly successful in recent years. Though many would like to see more autonomy for the region, support for complete independence is very low.Fact|date=July 2007

A chronic issue affecting French Guiana is the influx of illegal immigrants and clandestine gold prospectors from and . The border between the department and Suriname is formed by the , which flows through rain forest and is difficult for the Gendarmerie and the to patrol. The border line with Suriname is disputed.

French Guiana is divided into 2 departmental arrondissements, 19 cantons (not shown here), and 22 communes:

Though sharing cultural affinities with the French-speaking territories of the , French Guiana cannot be considered to be part of that geographic region, with the Caribbean Sea actually being located several hundred kilometres to the west, beyond the arc of the .

French Guiana consists of two main geographical regions: a coastal strip where the majority of the people live, and dense, near-inaccessible which gradually rises to the modest peaks of the along the Brazilian frontier. French Guiana's highest peak is (851 m). Other mountains include (782 m), (711 m) and (635 m), (200 m) and (156 m). Several small islands are found off the coast, the three Salvation Islands which includes and the isolated bird sanctuary further along the coast towards Brazil.

The hydroelectric dam in the north of French Guiana forms an artificial lake and provides . There are many rivers in French Guiana.

launched from the "Guiana Space Centre" near , on 10 August 1992.] French Guiana is heavily dependent on for subsidies, trade, and goods. The main industries are fishing (accounting for three-quarters of foreign exports), mining and . In addition, the at accounts for 25% of the GDP and employs about 1700 people. There is very little manufacturing. Agriculture is largely undeveloped and is mainly confined to the area near the coast &mdash; sugar and bananas are two of the main s grown. Tourism, especially eco-tourism, is growing. Unemployment is a major problem, running at about 20% to 30%.

French Guiana's main international airport is , located in the commune of , a southern suburb of . There is one flight a day to (Orly Airport), and one flight a day arriving from Paris. The flight time from Cayenne to Paris is 8 hours and 25 minutes, and from Paris to Cayenne it is 9 hours and 10 minutes. There are also flights to , , , , , , and .

French Guiana's main seaport is the port of , located on the of the , in the commune of , a south-eastern suburb of Cayenne. Almost all of French Guiana's imports and exports pass through the port of Dégrad des Cannes. Built in 1969, it replaced the old harbour of Cayenne which was congested and couldn't cope with modern traffic.

An asphalted road from to (a town by the ian border) was opened in 2004, completing the road from Cayenne to the Brazilian border. It is now possible to drive on a fully paved road from on the se border to Saint-Georges de l'Oyapock on the Brazilian border. Following an international treaty between France and Brazil signed in July 2005, a bridge over the (marking the border with Brazil) is currently being built and is due to open in 2010. This bridge will be the first land crossing ever opened between France and Brazil, and indeed between French Guiana and the rest of the world (there exists no other bridge crossing the Oyapock River, and no bridge crossing the marking the border with Suriname - there is a crossing to .). When the bridge is opened, it will be possible to drive uninterrupted from Cayenne to , the capital of the state of in Brazil.

French Guiana's population of 209,000 (January 2007 est.), [fr icon cite web| url=http://www.insee.fr/fr/recensement/nouv_recens/resultats/resultats-regionaux.htm| title="Estimations de population régionale au 1er janvier 2007"| first=Government of France| last=| accessdate=2008-01-15] most of whom live along the coast, is very ethnically diverse. At the 1999 census, 54.4% of the inhabitants of French Guiana were born in French Guiana, 11.8% were born in , 5.2% were born in the French "départements" ( and ), and 28.6% were born in foreign countries (primarily , , and ). [fr icon cite web| url=http://www.recensement.insee.fr/FR/ST_ANA/D9C/MIGTABMIG1DOMMIG1DOMAD9CFR.html| title="Migrations (caractéristiques démographiques selon le lieu de naissance)"| first=Government of France| last=INSEE| accessdate=2007-05-04]

Estimates of the percentages of French Guiana ethnic composition vary, a situation compounded by the large numbers of immigrants (about 20,000).

Guianese Creoles (people of primarily African heritage mixed with some French ancestry) are the largest ethnic group, though estimates vary as to the exact percentage, depending upon whether the large an community is included as well. Generally the Creole population is judged at about 60% to 70% of the total population with Haitians (comprising roughly one-third of Creoles) and 30% to 50% without. Roughly 14% are Europeans, the vast majority of whom are French.

The main Asian communities are the Hmong from (1.5%) and Chinese (3.2%, primarily from and Zhejiang province). There are also smaller groups from various islands, mainly as well as . The main groups living in the interior are the Maroons (also called Bush Negroes) and Amerindians.

The Maroons, descendants of escaped African slaves, live primarily along the . The main Maroon groups are the , (both of whom also live in ) and the Boni (Aluku).

The main Amerindian groups (forming about 3%-4% of the population) are the , , , (now called the ), Palikour, and . As of late 1990s there was evidence of uncontacted group of Wayampi.

The most practised religion in this region is Roman Catholicism; the Maroons and some Amerindian peoples maintain their own religions. The Hmong people are also mainly Catholic owing to the influence of Catholic missionaries who helped bring them to French Guiana. [cite book|title=South America |author= Danny Palmerlee|year= 2007|publisher=|id=ISBN 174104443X|url= http://books.google.com/books?vid=ISBN174104443X&id=zeUwp50DR9EC&pg=PA746&lpg=PA746&dq=%22French+Guiana%22+date:2000-2007&ie=ISO-8859-1&output=html&sig=Gmy65FICYCisCQwh8XgOF9h0rmo] The Religion is also present.

* , French international football player who plays for
* , an escaped French convict, imprisoned in and around French Guiana from 1933 to 1945.
* , Politician of Parti Radical de Gauche (France)
* , French swimmer, SC European Championships 2004: 1st 100m free.
* , former French international football player.
* , former West Bromwich Albion and player.
* , Francophone poet widely notated for his influence on the literary movement known as la
* , famous singer, one of the inspiration sources for the movement.
* , football who joined Rangers from in the summer of 2007.
* , football striker who joined in the winter of 2006