caption=View of Grenoble, 2002, with the snowy peaks of the 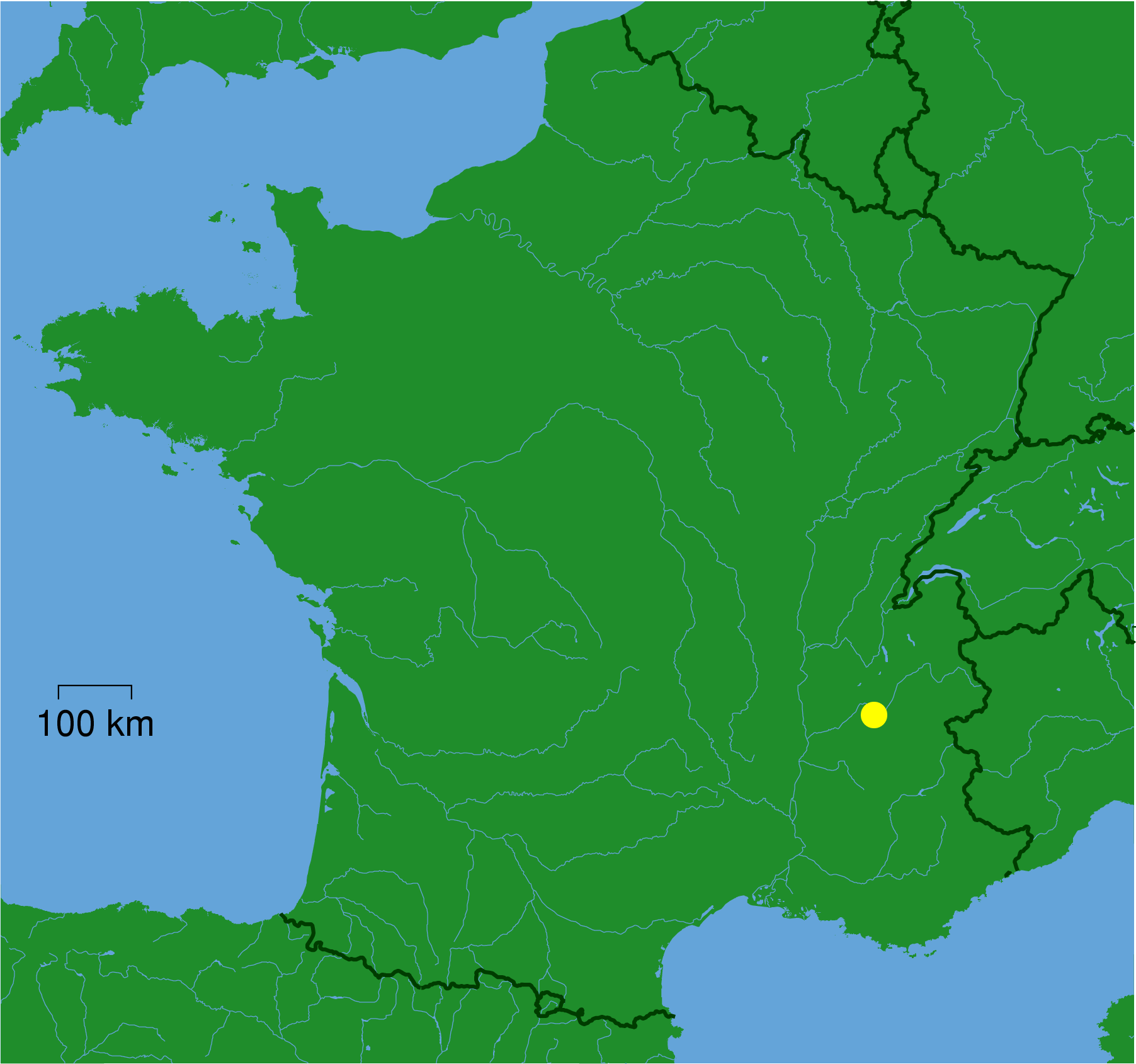 Grenoble is a city and commune in south-east situated at the foot of the where the Drac joins the . Located in the "région", Grenoble is the "préfecture" (capital) of the "département" of . The proximity of the mountains make the city named "Capital of Alps" by french people. The population of the city (commune) of Grenoble at the 1999 was 153,317 inhabitants (157,900 inhabitants estimated as of February 2004 ). The population of the whole metropolitan area (French: "") at the 1999 census was 514,559 inhabitants and 560,222 inhabitants at the 2007 estimate. Among the numerous communes included are the city's largest suburbs, , , and Fontaine, each with a population exceeding 20,000 inhabitants.

Grenoble is surrounded by mountains. To the north is the Chartreuse, to the west the Vercors, and to the east the Belledonne range. For the French it is the capital of the Alps, and the regularly passes through Grenoble.

The city is mainly built on the alluvial plain of the River Isere at an altitude of around 214 meters. Mountain sports are an important tourist draw for the city. Twenty ski stations surround the city, the nearest being Le Sappey-en-Chartreuse, which is about 15 minutes' drive away.

Historically both Grenoble and the surrounding areas were sites of mining and heavy industry.Fact|date=March 2007. Abandoned mills and factories can be found in small towns and villages, such as the coal mine at .

Grenoble can be accessed by plane from , near , . Within Grenoble there is a comprehensive bus and tram service, run by [http://www.semitag.com/ Semitag] . It operates 26 bus lines and 4 tram lines, serving all of greater Grenoble.

Road links to the north and west are good, by autoroute, including to and the Rhone valley via Valence. An autoroute runs east up the valley towards the Alps and Italy.

The city is also circled by a partial beltway.

:"For the ecclesiastical history, see ."

The city has been known under different names through time:
* Cularo when the built strong walls around the small town in the 3rd century.
* Gratianopolis after 380 when the Emperor visited the city and had the walls improved.

After the collapse of the the city was part of the first Burgundian kingdom, until it was taken by , king of the and a son of Clovis. Later on, it passed into the possession of the kings, then the second Burgundian (French: Arles), and finally became a possession of the counts of Vienne, whose title, "Dauphin", gave the region its traditional name: "". Grenoble was the capital of the Dauphiné, a province of France since 1349, when the last Dauphin of Vienne sold the region to France, on condition that the heir to the French crown use the title of "Dauphin".

The city gained some notoriety on June 7, 1788 when the townspeople assaulted troops of Louis XVI in the "".

Modern history has been no less colorful with the sacking of the local churches from 1789 onwards, even to the extent of travelling guillotines, going from village to village to exact vengeace following unfounded accusations. Place de la Bastille (Place Hubert Dubedout now) was historically Place de la Guillotine.

These tensions arose again during the periods of Italian and German occupation in World War II. Many resistance fighters were betrayed in Grenoble. The old Gestapo HQ is now a well-known hotel. Grenoble was awarded the for its significant role in the .

The Bastille, an ancient series of fortifications, sits on the mountainside overlooking Grenoble, and is visible from many points in the city. The Bastille is one of Grenoble's most visited tourist attractions, and is a good vantage point for viewing the town below and the surrounding mountains.

Although the Bastille was begun in the , later years saw extensive additions including a semi-underground defense network. The Bastille has been credited as the most extensive example of 19th century fortifications in all of France, and held an important strategic point on the Alpine frontier.

Since 1934, the Bastille has been the destination of what locals call a "téléphérique", a system of egg-shaped cable cars ("Les Bulles") that provide riders with an excellent view over the . For those who opt for the "Bulles", a round trip costs €6.10. Alternatively, many locals do their "footing" or morning jogs up the mountain.

(French: Musée de Grenoble), 5, place Lavalette (near the Cathedral). Open 6 days a week 10h-18h30 (closed on Tuesdays, December 25th, January 1st, May 1st). The museum is a modern, smart building that is worth seeing. Collections of modern art. Among others, the museum holds four Picassos, one Miro, one Kandinsky and one Andy Warhol. [http://www.museedegrenoble.fr/ Website]

Located at 14 Rue Hebert in the city center, the Resistance Museum is an informative exhibition about World War II. It was created in 1966 and expanded throughout the 70s and 80s. Today, the museum explains the basic history of the region and World War II through personal testimonies. [http://www.resistance-en-isere.com/mr/index/num/1/lan/1/ Museum Website]

Located place Saint Laurent, the collections come from the archaeological excavations done on the site and space out themselves of the IIIème century after J. -C. on our days. Situated on the right strand of the Isère, the museum presents the vestiges permitting to carry up the time until the origins of Christianity. The museum is installed in a Benedictine church of the XIIth century. Discovered in 1803 by J. J. Champollion-Figeac, brother of the égyptologue. The church is one of the first monuments classified in France, thanks to the intervention of Prosper Mérimée, historic monument inspector. Since 1978, a systematic excavation is led Loud in the setting of a regional research program on the evolution of the churches during the Middle Aged. [http://www.musee-archeologique-grenoble.com/ Website] ..The museum is closed for works until December 2008.

Education and research in the city

The presence of a large international community through both foreign students and foreign researchers has prompted the creation of an international school more than a decade ago. The Cité Scolaire Internationale Europole (CSI Europole) was formerly situated downtown in the "", across from the "". In 2003 the CSI moved to its present location, near the train station. Originally only four language sections were available: German, Spanish, Italian and English, but Portuguese and an Arabic section have also been added. It is now one of France's best secondary education centres.

On , , the Dauphin Humbert II (the counts of Dauphiné bore the title of Dauphin) drew up a charter of the privileges granted to the students at Grenoble, promulgated measures to attract them, and stipulated that the university should give instruction in civil and , medicine, and the arts.

A curious ordinance issued , by Humbert II commanded the destruction of all the forges in the vicinity of Grenoble lest they should produce an irreparable famine of wood and charcoal. Humbert may have wished that life should be frugal where university was established. Finally on , , he declared that the superior court of justice of Dauphiné (conseil delphinal), which he removed from Saint-Marcellin to Grenoble, should be composed of seven counsellors, four whom might be chosen from among the professors at Grenoble. Humbert's projects do not appear to have been completely realized. The university lacked resources, indeed arts and medicine were not taught, and even the chairs of law seem scarcely to have survived the reign of Humbert II. At all events, when Louis XI created the in 1452, he declared that no institution of the kind existed at that time in Dauphiné.

This first attempt at a university had foundered, but it was re-established on sound footing in 1542 by Francois de Bourbon, Count of Saint-Pol, great-uncle of , and the royal governor of the Dauphiné province. The Italian jurist Gribaldi, the Portuguese jurist Govea, and the French jurist Pierre Lorioz, called Petrus Orioli (Pierre de Loriol)of a family originally of Pernes Les Fontaines, attracted many students thither, but the orthodoxy of these professors was suspected. This was one of the reasons which, in April, 1565, led to unite the University of Grenoble to that of Valence, for which in 1567 Bishop Montluc, well known as a diplomat and powerful at court, was able to obtain the noted jurist . The citizens of Grenoble protested and sent delegates to Paris, but the edict of union between the universities was strengthened by the circumstance that at the very time when Charles IX published his edict, Govea and Loriol were compelled to institute a suite against the town of Grenoble in order to secure the payment of their arrears of salary.

Equally ineffectual were the efforts for the renewal of the university frequently made by the town in the seventeenth and eighteenth centuries. Napoleon I, on 1 November, 1805, re-established the faculty of law of Grenoble. Since 1896 the different faculties of Grenoble form the University of Grenoble.

It is worth mentioning that under the current system there is little filtering of University entrance. Consequently, it has been pointed out as one of the causes of the enormous drop out rates in the first and second years. The schools where filtering is applied are called , the graduates of which retain most of the top positions in French Society.

Grenoble is now a major scientific center, especially in the fields of , and : "Joseph Fourier University" (UJF) is one of the leading French scientific universities while the "Grenoble Institute of Technology" (INPG) trains more than 1,000 engineers every year in key technology disciplines. Many fundamental and applied scientific research laboratories are conjointly managed by Joseph Fourier University, Grenoble Institute of Technology and the French "National Center for Scientific Research" (CNRS). Numerous other scientific laboratories are managed independently or in collaboration with the CNRS and the French "National Institute for Research in Computer Science and Robot Technology" (INRIA).

Other research centers in or near Grenoble include the (ESRF), the (ILL), the (EMBL) and one of the (Nuclear Energy Commission)(CEA) main research facilities.

The recent development of , a centre for innovation in micro & nanotechnology only increases the position of Grenoble as one of the European scientific centers.

Most recently, the City hosted the Science On Stage 2 Event for science teachers from across Europe. This was a major event with many significant speakers and politicians there to discuss and develop ideas for enhancing the quality of science teaching throughout Europe, along with hundreds of Europe's most innovative science teachers. It was a lively event, with lots of noise, colour and excitement as teachers demonstrated the kind of stuff you wished your science teachers did when you were at school! More information about this event can be found at:"http://www.esa.int/SPECIALS/Science_on_Stage/index.html" and a UK site with teaching resources as well: "http://www.scienceonstage2.co.uk/".

An IEP is located here, the "", as well as an internationally ranked business school, the "Grenoble École de Management" (Grenoble-EM).

* Grenoble is famous for its s, for which it enjoys an "appellation" of controlled origin.
* The town is famous for manufacturing of gloves, for which an innovative technique was introduced in XIX century.
* The town hosts an important Comics publisher, Glénat.
* Grenoble hosted the and is preparing to bid for the .
* Grenoble is famous for many nearby ski resorts nestled in the surrounding mountains, and its Italian quarter, the "Quartier Saint Laurent".
* It is the home of a team , a football team , and an ice hockey team .
* Grenoble has restaurants from budget to luxury of almost every cuisine; particularly common are Italian and Asian establishments.
* Grenoble is also famous in the world for its "Polygone Scientifique", one of the largest scientific research centers.
* The city has many high-tech and world-renowned enterprises in the surrounding area.

* by Joël Le Moigné deals with the city's prostitution underworld
* by Michel Régnier deals with the creation of a utopian city, today's poster child of urban segregation and isolation