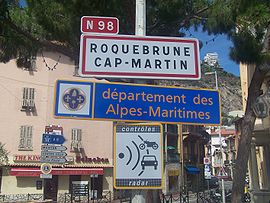 Alpes Maritimae was created by Octavian as a Roman military district in 14 BC, and became a full Roman province in the middle of the 1st century with its capital first at Cemenelum (today Cimiez, a neighborhood in Nice) and subsequently at Embrun. At its greatest extent in AD 297 , the province reached north to Digne and Briançon.

A first French département of Alpes-Maritimes existed in the same area from 1793 to 1814. Its boundaries differed from those of the modern department, however. In 1793 Alpes-Maritimes included Monaco and San Remo, but not Grasse which was then part of the départment of Var.

In 1947, following the Treaty of Paris and a referendum in the affected areas, the department was enlarged by the addition of the communes of Tende and La Brigue, which had remained Italian after the 1860 annexation, as well as by other minor adjustments to the Franco-Italian border.

Belvédère in the Vesubie valley, one of the many villages perché in the Alpes-Maritime.

The department is surrounded by the French departments of Var, Alpes-de-Haute-Provence, Italy and the principality of Monaco to the east, and the Mediterranean to the south.

Alpes-Maritimes includes the famous French Riviera coastline on the Mediterranean Sea with the important towns and cities of Cannes, Nice, Saint-Jean-Cap-Ferrat, and Antibes.

The area is mountainous right down to the coast. This Southern area of the Alps is termed the Maritime Alps.

Rivers include the following: 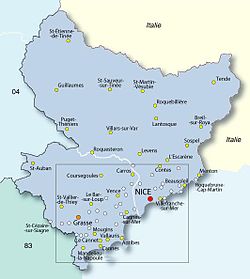 Department map showing its division into the 2 arrondissements and the location of some of its principal cities and towns.

Alpes-Maritimes is divided into 2 arrondissements (Grasse and Nice), 52 cantons and 163 municipalities (communes).

Below it is shown a list of most populated places of the department:

The economy is largely driven by tourism. Nice is second only to Paris in the number and size of its hotels. Because of the mild climate, it is a year-round tourist attraction.

Other notable industry includes the perfume industry in Grasse and high-tech industry around Sophia-Antipolis.

When Nice became French in 1860, it was still a small town; the department had fewer than 200,000 inhabitants. However, the population grew quickly from 300,000 at the beginning of the 20th century to over a million. The population is aging because of the number of retirees who move to the coast.

The population is now concentrated in the urban region that includes Antibes, Cannes, Grasse, Nice, and Menton, and which constitutes 90% of the total population.

The President of the General Council is Éric Ciotti of the Union for a Popular Movement. The UMP's majority on the general council is one of the largest majorities in any such institution in France.

The Cannes Film Festival attracts wide attention and the cream of the film industry. Juan-les-Pins hosts an annual jazz festival.

Tourism in the department centers on the Riviera, known as the Côte d'Azur, known for its beaches and luxury hotels.

The area inland from the busy Côte d'Azur is an excellent base for many outdoor sports: cycling, mountain biking, skiing, walking, rock climbing, canyoning, canoeing, rafting, fishing, horse riding, forests of adventure, caving and the area has the first ever under ground via ferrata. The area has internationally renowned paragliding and hang gliding flying sites – Col-de-Bleyne, Gourdon, Gréolières and Lachens.

The asteroid 100122 Alpes Maritimes is named in the département's honour, on the occasion of the thousandth discovery made from its territory.