Nevers (Latin: Noviodunum, later Nevirnum and Nebirnum) is a commune in – and the administrative capital of – the Nièvre department in the Bourgogne region in central France. It was the principal city of the former province of Nivernais, and is located 260 km (160 mi) SSE of Paris.

Nevers first enters written history as Noviodunum, a town held by the Aedui at Roman contact. The quantities of medals and other Roman antiquities found on the site indicate the importance of the place, and in 52 BCE, Julius Caesar made Noviodunum, which he describes as in a convenient position on the banks of the Loire, a depot (B. G. vii. 55). There he had his hostages, corn, his military chest, with the money in it allowed him from home for the war, his own and his army's baggage and a great number of horses which had been bought for him in Spain and Italy. After his failure before Gergovia, the Aedui at Noviodunum massacred those who were there to look after stores, the negotiatores, and the travellers who were in the place. They divided the money and the horses among themselves, carried off in boats all the corn that they could, and burnt the rest or threw it into the river. Thinking they could not hold the town, they burnt it. This was a great loss to Caesar; and it may seem that he was imprudent in leaving such great stores in the power of treacherous allies. But he was in straits during this year, and probably he could not do otherwise than he did. Dio Cassius (xl. 38) tells the story out of Caesar of the affair of Noviodunum. He states incorrectly what Caesar did on the occasion, and he shows that he neither understood his original nor knew what he was writing about.

It became the seat of a bishopric at the end of the 5th century. The county dates at least from the beginning of the 10th century. The citizens of Nevers obtained charters in 1194 and in 1231. For a short time in the 14th century the town was the seat of a university, transferred from Orléans, to which it was restored.

Nevers is situated on the slope of a hill on the right bank of the Loire River. 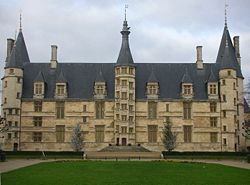 Narrow winding streets lead from the quay through the town where there are numerous old houses of the 14th to the 17th centuries.

Among the ecclesiastical buildings the most important is the Cathédrale of Saint Cyr-Sainte Julitte, dedicated to Saint Quiricus and Saint Julietta, which is a combination of two buildings, and possesses two apses. The apse and transept at the west end are the remains of a Romanesque church, while the nave and eastern apse are in the Gothic style and belong to the 14th century. There is no transept at the eastern end. The lateral portal on the south side belongs to the late 15th century; the massive and elaborately decorated tower which rises beside it to the early 16th century.

The church of Saint Etienne is a specimen of the Romanesque style of Auvergne of which the disposition of the apse with its three radiating chapels is characteristic. It was consecrated at the close of the 9th century, and belonged to a priory affiliated to Cluny.

The Ducal Palace (now occupied by the courts of justice and an important ceramic museum) was built in the 15th and 16th centuries and is one of the principal feudal edifices in central France. The facade is flanked at each end by a turret and a round tower. A middle tower containing the great staircase has its windows adorned by sculptures relating to the history of the House of La Marck by the members of which the greater part of the palace was built.

In front of the palace lies an open space with a fine view over the valley of the Loire. The Porte du Croux, a square tower, with corner turrets, dating from the end of the 14th century, is among the remnants of the old fortifications; it now contains a collection of sculptures and Roman antiquities.

A triumphal arch from the 18th century, commemorating the victory of Fontenoy and the hotel de ville, a modern building which contains the library, are of some interest. The Loire is crossed by a modern stone bridge, and by an iron railway bridge.

At the Chapel of Saint Bernadette at the mother house of the Sisters of Charity of Nevers, it is possible to view the preserved remains of Bernadette Soubirous (Saint Bernadette) which are presented in a gold and crystal reliquary.

Nevers is the seat of a bishopric, of tribunals of first instance and of commerce and of a court of assizes and has a chamber of commerce and a branch of the Bank of France. Its educational institutions include a lycee, a training college for female teachers, ecclesiastical seminaries and a school of art. The town manufactures porcelain, agricultural implements, chemical manures, glue, boilers and iron goods, boots and shoes and fur garments, and has distilleries, tanneries and dye works. Its trade is in iron and steel, wood, wine, grain, livestock, etc. hydraulic lime, kaolin and clay for the manufacture of faience are worked in the vicinity.

The Formula One circuit of Magny-Cours is located near Nevers.

The anonymous French actress (Emmanuelle Riva) who is the main character in the film Hiroshima Mon Amour by Alain Resnais is from Nevers, and the film features many flashbacks to her youth there during World War II. In the final scene of the film, her Japanese lover tells her "You are Nevers". There is a lot of play on the English translation of the town's name throughout the film, with dialogue such as "Nevers? Jamais!" ("Nevers? Never!")

Nevers is twinned with: