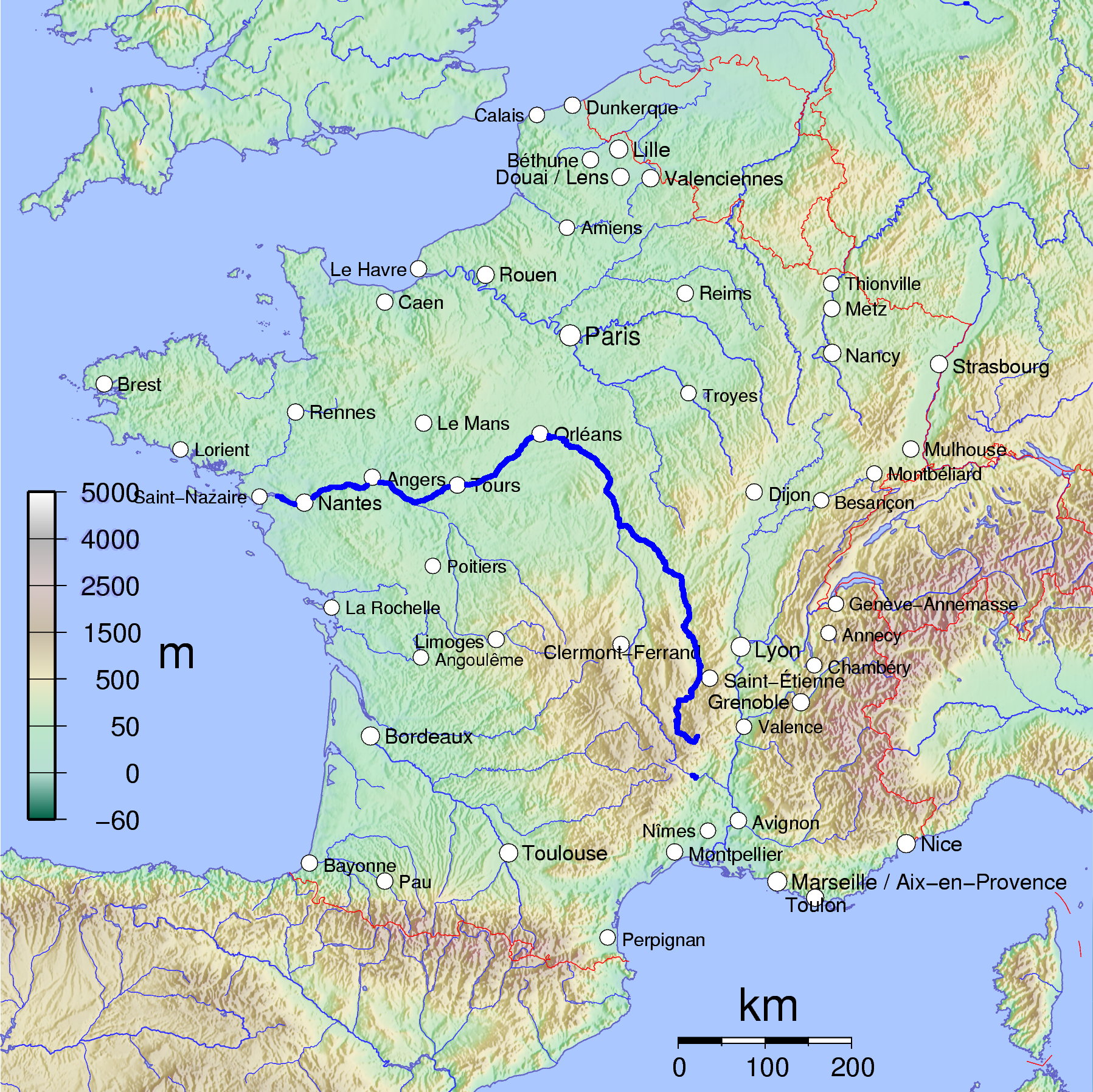 The Loire River (pronounced|lwaʁ in French) is the longest in . With a length of convert|1013|km|mi, it drains an area of convert|117000|km2|sqmi|abbr=on, which represents more than a fifth of France's land area. It rises in the in the Département of Ardèche at 1,350 m/4,430 ft near , and flows for over convert|1000|km|mi|abbr=on north through to , then west through and until it reaches the at . Its main tributaries include the , and the on the right bank, and the , , , , and the on the left bank. The Loire gives its name to the départements of , , , , , and . The central part of the was added to the list of on , . The banks are characterised by and s in the Loire Valley.

The name "Loire" comes from "Liger", which is itself a transcription of the native (Celtic) name of the river. The Gaulish name comes from the Gaulish word ', which means "silt, sediment, deposit, alluvium", a word that gave French ', as in "," which in turn gave English "lees". "Liga" comes from the Proto-Indo-European root *"legh-", meaning "to lie, lay", which gave many words in English, such as to lie, to lay, ledge, law, etc.

In French the adjective derived from the river is "ligérien", as in "le climat ligérien" ("the climate of the Loire Valley"), a climate considered the most pleasant of northern France, with warmer winters and, more generally, fewer extremes in temperatures, rarely exceeding convert|38|°C|°F.

Origins of the river

Studies of the paleogeography of the region suggest that in the the paleo-Loire continued its northward flow and joined the , [J. Tourenq and C. Pomerol, "Mise en évidence, par la présence d'augite du Massif Central, de l'existance d'une pré-Loire-pré-Seine coulant vers la Manche," "Comptes Rendus de l'Académie des Sciences", 320, 1995:1163-1169; Pierre Antoine, Jean Pierre Lautridou and Michel Laurent, "Long-term fluvial archives in NW France: response of the Seine and Somme rivers to tectonic movements, climatic variations and sea-level changes", "Geomorphology" 33.3-4, (June 2000:183-207)] while the lower Loire found its source upstream of in the region of , flowing westward along the present course. At a certain point during the long history of uplift in the , the lower, Atlantic Loire captured the "paleo-Loire" or "Loire séquanaise" ("Loire-Seine"), producing the present river. The former bed of the "Loire séquanaise" is occupied by the .

Originating in , in springs on in the north-eastern part of the southern highlands, the Loire flows roughly northward through and to and thereafter westward through to the Atlantic at , where it forms an . Changes in the river's water levels have sometimes resulted in serious flooding, notably in 1856, 1866 and 1911.

Unlike most other rivers in western Europe, there are very few s or locks creating obstacles to its natural flow. The Villerest dam, built in 1985 a few kilometers south of , has played a key-role in preventing recent flooding. As a result, the Loire is a very popular river for boating excursions, flowing through a pastoral countryside, past limestone cliffs and historic castles.

For over 2,000 years, the Loire was one of the great highways of France, but the coming of the railway in the 19th century caused a collapse in the river's commercial navigation. Today the river is only regarded as navigable as far as Bouchemaine, where the Maine joins it near .

The and Greeks had used packhorses to transport goods from Lyon to the Loire to get from the Mediterranean basin to the Atlantic coast. The Romans used the Loire as far as , only around convert|150|km|mi|abbr=on from the source, whilst the used longships to attack .

River traffic increased until the 19th century, with a toll system being used in medieval times. For centuries attempts were made to keep a navigable channel open by the use of wooden embankments and dredging. During the 17th century, instituted stone retaining walls and quays from Roanne to which helped make the river more reliable, but navigation was frequently stopped by flood and drought. In 1707 floods were said to have drowned 50,000 people, with the water rising more than convert|3|m|ft|abbr=on in two hours in . A typical passenger timetable from Orléans to Nantes took eight days, with the upstream journey against the flow taking fourteen.

Steam-driven passenger boats appeared soon after the beginning of the 19th century plying the river between Nantes and Orléans; by 1843, 70,000 passengers were being carried annually in the lower river. However with the introduction of the railway in the 1840s trade on the river steadily declined and proposals to build a fully navigable river up to came to nothing. The opening of the in 1838 enabled navigation between Digoin and Briare to continue, but the river level crossing at Briare remained a problem until the construction of the in 1896.

The was also opened in 1838 and was nearly closed in 1971 but still provides navigation further up the Loire valley to Digoin. However the convert|261|km|mi|abbr=on , a narrow canal with locks only convert|2.7|m|ft|abbr=on wide, which was opened in 1820s and connected the Canal latéral à la Loire at to the at and back into the Loire near Tours, was closed in 1955.

The Loire's tributaries include the following rivers, in order going upstream:

Several départements of France were named after the Loire. The Loire flows through the following départements and towns: