Neubrandenburg (New Brandenburg, IPA: [nɔʏˈbʁandənbʊʁk]) is a city in Mecklenburg-Vorpommern, Germany. It is located in the southeastern part of the state, on the shore of a lake called the Tollensesee (18 km²).

The city is famous for its rich medieval heritage of Brick Gothic. It belongs to the famous European Route of Brick Gothic, a route which leads through seven countries along the Baltic Sea coast. A former district-free town, it is the capital of the new district of Mecklenburgische Seenplatte since the September 2011 district reforms.

The city got a nickname because of the four medieval city gates - "Stadt der Vier Tore" ("City of Four Gates"). Neubrandenburg was the location of both of the world record throws in Discus, by Jürgen Schult in 1986 and by Gabriele Reinsch in 1988. 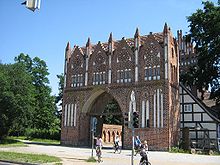 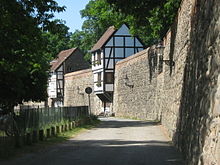 The first settlers at the place were Premonstratensian monks in Broda Abbey, a monastery at the shore (about 1240). The foundation of the town of Neubrandenburg took place in 1248, when the Margrave of Brandenburg decided to build a town in the northern part of his fief. In 1292 the town and the surrounding area became part of Mecklenburg.

The town flourished as a trade center until the Thirty Years' War (1618–48), when this position was lost. During the dramatic advance of the Swedish army of Gustavus Adolphus into Germany, the town was garrisoned by Swedes, but it was retaken by Imperial-Catholic League forces in 1631. During this operation it was widely reported that the Catholic forces killed many of the Swedish and Scottish soldiers while they were surrendering. Later, according to the Scottish soldier of fortune Robert Munro, 18th Baron of Foulis, when the Swedes themselves adopted a "no prisoners" policy, they would cut short any pleas for mercy with the cry of "New Brandenburg!". The town, therefore, played an unconscious role in the escalation of brutality of one of history's most brutal wars.

During World War II, a large prisoner-of-war camp Stalag II-A was located close to the town. In 1945, few days before the end of World War II, 80% of the old town was burned down by the Red Army in a great fire. In that course, about 600 people committed suicide.[3] Since then, most buildings of historical relevance have been rebuilt.

Neubrandenburg has preserved its medieval city wall in its entirety. The wall, 7 m high and with a perimeter of 2.3 km has four Brick Gothic town gates, dating back to the 14th and 15th centuries.

Of these, one of the most impressive is the Stargarder Tor (pictured), with its characteristic gable-like shape and the filigree tracery and rosettes on the outer defense side.
Another place of interest is the Brick Gothic Marienkirche (Konzertkirche) (Church of the Virgin Mary or St. Marien Church), completed 1298. The church was nearly destroyed in 1945, but it has been restored since 1975 to house a concert hall (opened 2001).

The tallest highrise in the city is the 56m Haus der Kultur und Bildung (HKB, House of Culture & Education), opened in 1965. Its slender appearance has earned it the nickname Kulturfinger ("culture finger").