East Berlin was the name given to the eastern part of Berlin between 1949 and 1990. It consisted of the Soviet sector of Berlin that was established in 1945. The American, British and French sectors became West Berlin, a part strongly associated with West Germany but a free city. Despite its status as part of an occupied city, East Berlin was claimed as the capital of East Germany, as the Soviets did not honor the distinction of a free city for their sector. From 13 August 1961 until 9 November 1989 East Berlin was separated from West Berlin by the Berlin Wall. The East German government referred to East Berlin simply as "Berlin" or often "Berlin, Hauptstadt der DDR" (Berlin, capital of the GDR). The term "Democratic Sector" was also used until the 1960s. (See also Naming conventions).

The Western Allies (the USA, Britain and France) never formally acknowledged the authority of the East German government to govern East Berlin; the official Allied protocol recognized only the authority of the Soviet Union in East Berlin in accordance with the occupation status of Berlin as a whole. The United States Command Berlin, for example, published detailed instructions for U.S. military and civilian personnel wishing to visit East Berlin.[1] In fact, the three Western commandants regularly protested the presence of the East German National People's Army (NVA) in East Berlin, particularly on the occasion of military parades. Nevertheless, the three Western Allies eventually established embassies in East Berlin in the 1970s, although they never recognized it as the capital of East Germany. Treaties instead used terms such as "seat of government."

On 3 October 1990, West and East Germany were reunited, thus formally ending the existence of East Berlin.

Since reunification, the German government has spent vast amounts of money on reintegrating the two halves of the city and bringing services and infrastructure in the former East Berlin up to the standard established in West Berlin. Despite this, there are still obvious differences between eastern and western Berlin. Eastern Berlin has a distinctly different visual aspect, partly because of the greater survival of prewar façades and streetscapes, some still showing signs of wartime damage, and partly because of the distinctive style of urban Stalinist architecture used in the GDR. As in other former East German cities, a small number of GDR-era names commemorating socialist heroes have been preserved, such as Karl-Marx-Allee, Rosa-Luxemburg-Platz and Karl-Liebknecht-Straße; this followed a long process of review in which many such street names were deemed inappropriate and were changed. Still visible throughout former East Berlin are the characteristic "Ampelmännchen" on some pedestrian traffic lights. These days they are also visible in parts of the former West Berlin following a civic debate about whether the "Ampelmännchen" should be abolished or disseminated more widely. 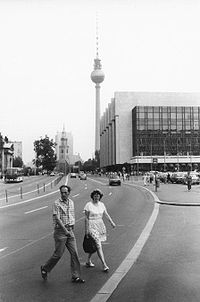 Marx-Engels-Platz and the Palast der Republik in East Berlin in the summer of 1989. The Fernsehturm (TV Tower) is visible in the background 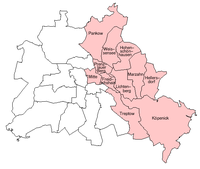 At the time of German reunification, East Berlin comprised the boroughs of

Statues of Marx and Engels, Marx-Engels-Forum