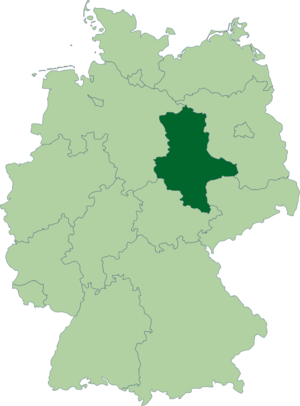 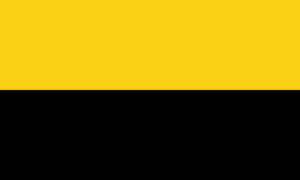 The state's name is sometimes spelled Saxony Anhalt in English (without the hyphen).

The capital of Saxony-Anhalt is Magdeburg. It is the second largest city in the state, after Halle. Nearby is the city of , where the "Bauhaus" is located. The provided a basis for the field of architecture and fine arts in the area. Dessau is also home to the opulent Dessau-Wörlitz garden complex. The city’s main attraction is the which is part of the .

The landscape of Saxony-Anhalt is quite varied. From the region of in the north, the state extends from the Magdeburg region, a vast lowland, through the , a low mountain range, until one comes to Thuringia. The highest mountain in the vicinity is , with an elevation of 1,141 meters (3,735 ft). Below the summit, the forms an extensive wildlife sanctuary.

A further reform, effective from July 2007, reduced the 21 districts to 11 districts ("Landkreise"):

The geographical concept of Saxony has undergone considerable shifts over the course of the past 15 centuries. The land of the Saxons, Saxony was in Frankish times roughly the area of northwestern Germany between the rivers Elbe and Ems; it also included part of south Jutland. This area corresponds roughly to that of the federal German state of Lower Saxony established after World War II and western parts of Saxony-Anhalt.

The Duchy of Saxony

After Charlemagne's conquest (772–804) of the Saxons, their homeland was incorporated in the Carolingian empire. By the latter half of the 9th century it was recognized as the duchy of Saxony. Comprising the four divisions of Westphalia, Angria, Eastphalia, and Holstein, it embraced nearly all the territory between the Elbe and Saale rivers on the east and the Rhine on the west, and bordered on Franconia and Thuringia in the south. Duke Henry I (Henry the Fowler) of Saxony was elected German king in 919. His son, Emperor Otto I, bestowed (961) Saxony on Hermann Billung (d. 973), a Saxon nobleman, whose descendants held the duchy until the extinction of the male line in 1106. Lothair of Supplinburg () bestowed it on his Guelphic son-in-law, Henry the Proud, who was already duke of Bavaria.

In 1142 the duchy passed to Henry the Lion, son of Henry the Proud. The struggle between Henry the Lion and Emperor Frederick I ended with Henry's loss of all his fiefs in 1180. The duchy was broken up into numerous fiefs. The Guelphic heirs of Henry the Lion retained only their allodial lands, the duchy of Brunswick. The ducal title of Saxony was passed to Bernard of Anhalt, a younger son of Albert the Bear of Brandenburg and founder of the Ascanian line of Saxon dukes. Besides Anhalt, Bernard received Lauenburg and the country around Wittenberg, on the Elbe. These widely separate territories continued after 1260 under separate branches of the Ascanians as Saxe-Lauenburg and Saxe-Wittenberg.

The Golden Bull of 1356 raised the duke of Saxe-Wittenberg to the hereditary rank of elector, i.e., member of the college that elected the Holy Roman Emperor. Electoral Saxony, as his territory was called, was a relatively small area along the middle Elbe. To the south of Electoral Saxony extended the margraviate of Meissen, ruled by the increasingly powerful house of Wettin. The margraves of Meissen acquired (13th–14th cent.) the larger parts of Thuringia and of Lower Lusatia and the intervening territories, and in 1423 Margrave Frederick the Warlike added Electoral Saxony; he became (1425) Elector Frederick I. Thus, the land known as "Saxony" shifted southeastward from the original Saxon homeland in northwestern Germany.

In 1485 the Wettin lands were partitioned between two sons of Elector Frederick II; the division came to be permanent. Ernest, founder of the Ernestine branch of Wettin, received Electoral Saxony with Wittenberg and most of the Thuringian lands. Albert, founder of the Albertine branch, received ducal rank and the Meissen territories, including Dresden and Leipzig. Duke Maurice of Saxony, a grandson of Albert and a Protestant, received the electoral title in the 16th century; it remained in the Albertine branch until the dissolution (1806) of the Holy Roman Empire.

The rivalry between Saxony and Brandenburg (after 1701 the kingdom of Prussia) was a decisive factor in later Saxon history, as was the election (1697) of elector Frederick Augustus I of Saxony as king of Poland (King Augustus II); the personal union contributed to the formation of close economic ties between the declining Poland and Saxony, whose prestige was thereby diminished. In the War of the Austrian Succession, Saxony adhered to what had become its traditional wavering policy, changing sides in the middle of the conflict. The death (1763) of Augustus III ended the union with Poland.

The period of Saxon rule in Poland marked a time of economic and social decay but of cultural and artistic flowering. Augustus II and Augustus III were lavish patrons of art and learning and greatly beautified their capital, Dresden. The universities of Wittenberg and Leipzig had long been leading intellectual centers, and 18th-century Leipzig led in the rise of German literature as well as in music, which reached its first peak in J. S. Bach.

sided with against early in the French Revolutionary Wars, but changed sides in 1806. For this act its elector was raised to royal rank, becoming King Frederick Augustus I. His failure to change sides again before 's fall cost him (1815) nearly half his kingdom at the . The kingdom of Saxony lost Lower Lusatia, part of Upper Lusatia, and all its northern territory including and to . Its principal remaining cities were , , , and . The larger part of the territories ceded in 1815 were incorporated with several other Prussian districts into the Prussian province of Saxony, with its capital. This was united after 1945 with to form the state of and became part of the () in 1949. From 1952 to 1990 Saxony-Anhalt was divided into the East German districts of Halle, , , and . In 1990, prior to , the districts were reintegrated as a state.

Minister-president (CDU) could not continue his coalition with the FDP and negotiated a with the SPD instead.

Saxony Anhalt is famous for its good soil. The "Magdeburger Börde" contains the best soil in all of Germany and some of the best of Europe. The food industry has an important role in this state. Some of the best known products are "Baumkuchen" from Salzwedel (Altmark) or "Hallorenkugeln" from Halle.

In the industrial sector the chemical industry is quite important. One of the biggest chemical producing areas can be found around the cities of Wolfen and Bitterfeld. Because of the chemical industry, Saxony Anhalt is the largest receiver of FDIs (Foreign Direct Investments) in all of eastern Germany.