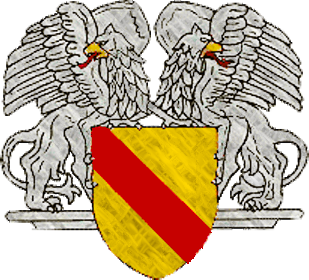 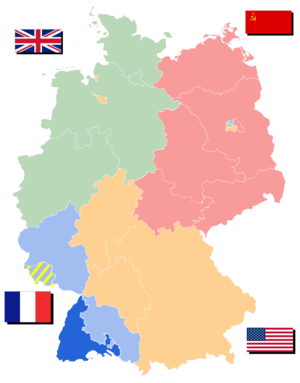 South Baden ( _de. Südbaden), formed in December 1945 from the southern half of the former , was a subdivision of the French occupation zone of post-WWII Germany. The state was later renamed to Baden and became a founding state of the Federal Republic of Germany (, today simply ) in 1949. In 1952, Baden became part of the modern German state of .

This was the last German state known as "", which had existed in various forms since the .

At the in 1945, was allocated an occupation zone for the administration of post-war Germany. The south-west of Germany - previously consisting of Baden, Württemberg and the n - was divided between France in the south and the in the north. The border between the two zones was set so that the connecting and (today the A8) was completely contained within the American zone; was also placed under American administration. In the French zone, Hohenzollern and the southern half of Württemberg were merged to form . The southern half of Baden was established as South Baden on . was designated as the capital of South Baden; the former capital of Baden (Karlsruhe) was in the American zone.

A constitution for Baden was enacted on , [cite web |url=http://www.verfassungen.de/de/bw/baden47.htm |title=Constitution of Baden |date= |language=German |accessdate=2008-01-14] whose preamble laid claim to this new state being the true successor of the old Baden: although most of its territory had only been part of Baden for the previous 150 years. To reinforce this claim, the constitution also adopted the pre-WWII Baden flag and coat of arms for the new state. The constitution also made it clear that the name of the state was "Baden" instead of "South Baden". In 1949, the Baden parliament voted in favour of the and became a founding state of (West) Germany upon its formation on .

For the first year of its existence, South Baden was directly governed by the French military administration. After local elections in December 1946, the (BCSV) emerged as the strongest party and its leader, , was appointed by the French administration as president of the state secretariat. In April 1947, the BCSV became associated with the federal Christian Democratic Union (CDU), renaming itself to "CDU Baden" and was thus a predecessor of .

On the first and only state elections were held in Baden, with Wohleb's CDU winning an absolute majority of 55.9%. The SPB - the Baden branch of the SPD - came second with 22.4%. Since the French military administration still held many key executive powers in Baden, a single-party government was not possible despite the CDU's absolute majority. Attempts to form an all-party government failed, owing to disagreements regarding the inclusion of the Communist party (KPD). Eventually, a between the CDU and SPB was formed, with Wohleb as . After the formation of the Federal Republic of Germany and the end of French administration, single-party governments were again permitted and the coalition was no longer needed; from 1949 until 1952, Wohleb governed Baden at the head of a CDU-only government.

With the end of military rule in West Germany, the three western powers requested that state leaders should re-examine and finalise the borders that had been established during occupation. In the south west, it was undecided whether Baden and Württemberg should be re-established as separate states (with Württemberg absorbing Hohenzollern, since Prussia had been abolished) or merged to form a new state. In Baden, Wohleb was a strong opponent of a merger. In 1950, a referendum regarding the merger of the three south-western states was carried out. Within the pre-1945 borders of Baden, the merger was rejected and a restoration of Baden was elected. This vote in Baden was outweighed by the more populous Württemberg, where the merger was accepted. Following this referendum, the three south-west states were merged to form the modern German state of on .

Various legal contests were mounted against the referendum and the resulting merger. The newly-founded ("Bundesverfassungsgericht") rejected a nullification of the referendum in 1951, after the judges' vote ended in a draw. In 1956, the court concluded that the referendum in (South) Baden was not accepted by the majority and should be repeated. The Baden-Württemberg government did not allow this repeat to take place until fourteen years later in 1970: eighteen years after the merger. This time, the vote in (South) Baden was 81% in favour of the "status quo".