The Communist Party of Germany (German: Kommunistische Partei Deutschlands – KPD) was a major political party in Germany between 1918 and 1933, and a minor party in West Germany in the postwar period until it was banned in 1956. In the 1920s it was called the "Spartacists", since it was formed from the Spartacus League.

Founded in the aftermath of the First World War by socialists opposed to the war, led by Rosa Luxemburg, after her death the party forsook Luxemburgism and became gradually ever more committed to Leninism and later Stalinism. During the Weimar Republic period, the KPD usually polled between 10 and 15 per cent of the vote and was represented in the Reichstag and in state parliaments. The party directed most of its attacks on the Social Democratic Party of Germany, which it considered its main opponent. Banned by the Nazi regime of Adolf Hitler, the KPD maintained an underground organization but suffered heavy losses. The party was revived in divided postwar West and East Germany and won seats in the first Bundestag (West German Parliament) elections in 1949, but its support collapsed following the establishment of a communist state in the Soviet occupation zone of Germany.

In East Germany, the party was merged, by Soviet decree, with the Social Democratic Party to form the Socialist Unity Party which ruled East Germany until 1989-1990. It was banned in West Germany in 1956 by the Constitutional Court. Some of its former members founded an even smaller fringe party, the German Communist Party (DKP), in 1969, which remains legal, and multiple tiny splinter groups claiming to be the successor to the KPD have also subsequently been formed.

Before the First World War the Social Democratic Party (SPD) was the largest party in Germany and the world's most successful socialist party. Although still officially claiming to be a Marxist party, by 1914 it had become in practice a reformist party. In 1914 the SPD members of the Reichstag voted in favour of the war. Left-wing members of the party, led by Karl Liebknecht and Rosa Luxemburg, strongly opposed the war, and the SPD soon suffered a split, with the leftists forming the Independent Social Democratic Party of Germany (USPD) and the more radical Spartacist League. In November 1918, revolution broke out across Germany. The leftists, led by Rosa Luxemburg and the Spartacist League, formed the KPD at a founding congress held in Berlin in 30 December 1918 – 1 January 1919.[2]

There were seven main reports given:

These reports were given by leading figures of the Spartakus League, however members of the Internationale Kommunisten Deutschlands also took part in the discussions

Under the leadership of Liebknecht and Luxemburg, the KPD was committed to a violent revolution in Germany, and during 1919 and 1920 attempts to seize control of the government continued. Germany's Social Democratic government, which had come to power after the fall of the Monarchy, was vehemently opposed to the KPD's idea of socialism. With the new regime terrified of a Bolshevik Revolution in Germany, Defense Minister Gustav Noske formed a series of Anti-Communist paramilitary groups, dubbed "The Freikorps", out of demobilized World War I veterans. During the failed so-called Spartacist uprising in Berlin of January 1919, Liebknecht and Luxemburg, who had not initiated the uprising but joined once it had begun, were captured by the Freikorps and murdered. according to Boris Nikolaevsky, Karl Liebknicht's brother claimed that Lenin through Radek arranged the murder to rid himself of serious rivals to leadership of the communist movement. The Party split a few months later into two factions, the KPD and the Communist Workers Party of Germany (KAPD).

Following the assassination of Leo Jogiches, Paul Levi became the KPD leader. Other prominent members included Clara Zetkin, Paul Frölich, Hugo Eberlein, Franz Mehring, August Thalheimer, and Ernst Meyer. Levi led the party away from the policy of immediate revolution, in an effort to win over SPD and USPD voters and union officials. These efforts were rewarded when a substantial section of the USPD joined the KPD, making it a mass party for the first time.

Through the 1920s the KPD was racked by internal conflict between more and less radical factions, partly reflecting the power struggles between Zinoviev and Stalin in Moscow. Germany was seen as being of central importance to the struggle for socialism, and the failure of the German revolution was a major setback. Eventually Levi was expelled in 1921 by the Comintern for "indiscipline." Further leadership changes took place in the early 1920s, and Party members accused of being Trotskyites were expelled; of these, Heinrich Brandler, August Thalheimer and Paul Frölich set up a splinter Communist Party Opposition. 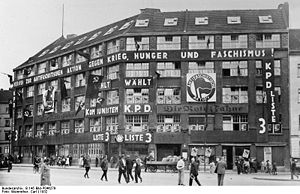 Karl-Liebknecht-Haus, the KPD's headquarters from 1926 to 1933. The KPD leaders were arrested by the Gestapo in this building in January 1933, when Hitler became Chancellor. The plaques on either side of the door recall the building's history. Today it is the Berlin headquarters of the Left Party 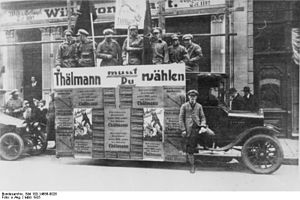 In 1923 a new KPD leadership more favorable to the USSR was elected. This leadership, headed by Ernst Thälmann, abandoned the goal of immediate revolution, and from 1924 onwards contested Reichstag elections, with some success.

During the years of the Weimar Republic the KPD was the largest Communist party in Europe, and was seen as the "leading party" of the Communist movement outside the Soviet Union. It maintained a solid electoral performance, usually polling more than 10% of the vote, and gaining 100 deputies in the November 1932 elections. In the presidential election of the same year, Thälmann took 13.2% of the vote, compared to Hitler's 30.1%.

Critics of the KPD accused it of having pursued a sectarian policy – e.g. its denunciation of the SPD as "social fascists" – that scuttled any possibility of a united front with the SPD against the rising power of the Nazis. These allegations were repudiated by supporters of the KPD: the right-wing leadership of the SPD, it was said, rejected the proposals of the KPD to unite for the defeat of fascism. The SPD leaders were accused of having countered KPD efforts to form a united front of the working class. For instance, after Papen's government carried out a coup d'état in Prussia, the KPD called for a general strike and turned to the SPD leadership for joint struggle. But the SPD leaders again refused to cooperate with the KPD.

Soon after the appointment of Hitler as Chancellor, the Reichstag was set on fire and Dutch council communist Marinus van der Lubbe was found near the building. The Nazis publicly blamed the fire on communist agitators in general, although in a German court in 1933, it was decided that van der Lubbe had acted alone, as he claimed to have done. After the fire, habeas corpus was suspended. The Enabling Act, which legally gave Hitler dictatorial control of Germany, was passed by a Reichstag session held after all communist deputies had been arrested and jailed.

The KPD was efficiently suppressed by the Nazis. Thousands of Communists were imprisoned in concentration camps, including Thälmann. The most senior KPD leaders to escape were Wilhelm Pieck and Walter Ulbricht, who went into exile in the Soviet Union. The KPD maintained an underground organisation in Germany throughout the Nazi period, but the loss of many core members severely weakened the Party's infrastructure.

A number of senior KPD leaders in exile were caught up in Joseph Stalin's Great Purge of 1937-38 and executed, among them Eberlein, Heinz Neumann, Hermann Remmele, Fritz Schulte and Hermann Schubert, or sent to the GULAG, like Margarete Buber-Neumann. Still others, like Gustav von Wangenheim and Erich Mielke, denounced their fellow exiles to the NKVD.[4] Willi Münzenberg, the KPD's propaganda chief, was murdered in mysterious circumstances in France in 1940. The NKVD is believed to have been responsible.

The KPD reorganised in the western part of Germany, and received 5.7% of the vote in the first Bundestag election in 1949. But the onset of the Cold War and imposition of a communist state in East Germany soon caused a collapse in the party's support. At the 1953 election the KPD only won 2.2 percent of the total votes and lost all of its seats. The party was banned in August 1956 by the Federal Constitutional Court of Germany. The ban was due to the aggressive and combative methods that the party used as a "Marxist-Leninist party struggle" to achieve their goals. After the party was declared illegal, many of its members continued to function clandestinely despite increased government surveillance. Part of its membership refounded the party in 1968 as the German Communist Party (DKP), which still exists. Following German reunification, however, many DKP members joined the new PDS. In 1968, a self-named "true successor" to the (banned) West German KPD was formed, the KPD/ML (Marxist-Leninist), which followed maoist ideas. It went through multiple splits and united with a Trotskyist group in 1986 to form the Unified Socialist Party (VSP), which failed to gain any influence and dissolved in the early 1990s. However, multiple tiny splinter groups originating in the KPD/ML still exist, several of which claim the name of KPD. Another party with this name was formed in 1990 in East Berlin by members of the GDR leadership who were expelled from the PDS, including Erich Honecker. The "KPD (Bolshevik)" split off from the East German KPD in 2005, bringing the total number of (more or less) active KPDs to at least 5. The Left claims to be the historical successor of the KPD.

In the early 1920s, the party operated under the principle of Democratic Centralism, whereby the leading body of the party was the Congress, meeting at least once a year.[5] Between Congresses, leadership of the party resided in the Central Committee, which was elected at Congress, of one group of people who had to live where the leadership was resident and formed the Zentrale and others nominated from the districts they represented (but also elected at the Congress) who represented the wider party.[6] Elected figures were subject to recall by the bodies that elected them.[7]

The KPD employed around about 200 fulltimers during its early years of existence, and as Broue notes "They received the pay of an average skilled worker, and had no privileges, apart from being the first to be arrested, prosecuted and sentenced, and when shooting started, to be the first to fall".[8]