A map showing the current (2011) states with self-declared communist governments. They are China, Cuba, Laos, Vietnam, and North Korea. 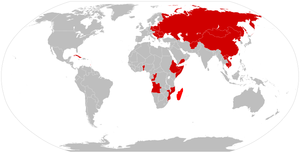 A communist state is a state with a form of government characterized by single-party rule or dominant-party rule of a communist party and a professed allegiance to a Leninist or Marxist-Leninist communist ideology as the guiding principle of the state. According to this principle public ownership of all means of production is necessary for the possibility to further the interest of the working class. According to Marxists, a multi-party capitalist state allows parties to represent interests of subgroups instead of the coherent whole, and because it allows private fortune, it allows private fortune to distort the political decision-making.

However, these states do not refer to themselves as "Communist states", but instead constitutionally identify themselves as socialist states or Workers' states. The primary goal of these states, and their justification for single-party rule, is to guide their respective countries in the process of constructing socialism.

Communist states may have several legal political parties, but the communist party is usually granted a special or dominant role in government,[1] often by statute or under the constitution. Consequently, the institutions of the state and of the communist party become intimately entwined, such as in the development of parallel institutions.

In the 20th century, most communist states adopted planned economies. However, there were exceptions: The Soviet Union during the 1920s and late 1980s and Yugoslavia after World War II allowed limited markets and a degree of worker self-management, while China, Vietnam and Laos introduced far-reaching market reforms after the 1980s.

The fundamental concepts of communist states often diverge from the original socio-economic ideologies from which they develop. As a result, many adherents of these ideologies often oppose the political systems commonly associated with these states. For example, activists describing themselves as Trotskyists or communists were often opposed to the communist states of the 20th century, claiming either that they have nothing to do with 'real' communism or that the ideology of such states has reached a point of irrevocable corruption.

While historically almost all claim lineage to Marxist thought, there are many varieties of communist states, with indigenous adaptions. For Marxist-Leninists, the state and the communist party claim to act in accordance with the wishes of the industrial working class.

For Maoists, the state and party claim to act in accordance to the peasantry. Under Deng Xiaoping, the People's Republic of China proclaimed a policy of "socialism with Chinese characteristics". In most communist states, governments assert that they represent the democratic dictatorship of the proletariat.

These "Communist states" often don't claim to have achieved socialism or communism in their countries; rather, they claim to be building and working toward the establishment of socialism in their countries. For example, the preamble to the Socialist Republic of Vietnam's constitution states that Vietnam only entered a transition stage between capitalism and socialism after the country was re-unified under the Communist party in 1976[2], and the 1992 Constitution of the Republic of Cuba states that the role of the Communist Party is to "guide the common effort toward the goals and construction of socialism".[3]

Alternative names that states adhering to an officially "communist" ideology may assign themselves is socialist state or socialist republic. This is because these nations have not yet transcended capitalism or state capitalism and progressed toward pure communism in the Marxist sense, which can only be achieved once capitalism exhausts itself.

Communist states share similar institutions, which are organized on the premise that the communist party is a vanguard of the proletariat and represents the long-term interests of the people. The doctrine of democratic centralism, which was developed by Lenin as a set of principles to be used in the internal affairs of the communist party, is extended to society at large.[4]

The constitutions of most communist states describe their political system as a form of democracy.[5] Thus, they recognize the sovereignty of the people as embodied in a series of representative parliamentary institutions. Communist states do not have a separation of powers; instead, they have one national legislative body (such as the Supreme Soviet in the Soviet Union) which is considered the highest organ of state power and which is legally superior to the executive and judicial branches of government.[6]

Such national legislative politics in communist states often have a similar structure to the parliaments that exist in liberal republics, with two significant differences: first, the deputies elected to these national legislative bodies are not expected to represent the interests of any particular constituency, but the long-term interests of the people as a whole; second, against Marx's advice, the legislative bodies of communist states are not in permanent session. Rather, they convene once or several times per year in sessions which usually last only a few days.[7]

When the national legislative body is not in session, its powers are transferred to a smaller council (often called a presidium) which combines legislative and executive power, and, in some communist states (such as the Soviet Union before 1990), acts as a collective head of state. In some systems, the presidium is composed of important communist party members who vote the resolutions of the communist party into law.

Another feature of communist states is the existence of numerous state-sponsored social organizations (trade unions, youth organizations, women's organizations, associations of teachers, writers, journalists and other professionals, consumer cooperatives, sports clubs, etc.) which are integrated into the political system.

Historically, the political organization of many communist states has been dominated by a single-party monopoly. Some communist regimes, such as North Korea, East Germany or the Czechoslovak Socialist Republic have or had more than one political party, but all minor parties are or were required to follow the leadership of the communist party. In communist states, the government may not tolerate criticism of policies that have already been implemented in the past or are being implemented in the present.[9]

In addition, communist states are widely seen as being de facto dictatorships by historians and sociologists, as rigged elections have been commonplace under some communist governments.[10] Nevertheless, communist parties have won elections and governed in the context of multi-party democracies, without seeking to establish a one-party state. Examples include San Marino, Republic of Nicaragua [11], Republic of Moldova (since 2001), Cyprus (presently)[12], and the Indian states of Kerala, West Bengal and Tripura.[13] However, for the purposes of this article, these entities do not fall under the definition of communist state.

Objections to use of term

Not every country ruled by a communist party is viewed by left communists[14] and Trotskyists[15] as a communist state, and the term "communist state" has traditionally been used in Western political scientists and mass-media to refer to a specific type of one-party state.

Some communists, such left communists,[14] dispute the validity of the term "communist state". In classical Marxism, communism is the final phase of history at which time the state would have "withered away"[16] and therefore "communist state" is a contradiction in terms under premises of this theory. Current states are either in the capitalist or socialist phase of history – making the term "socialist state" preferable to many communists and marxist theorists[17].

Some Marxists[14] have also opposed the usage of the term "communist state". Their critique may be based on a variety of arguments, but nearly all anti-Stalinist communists[14] argued that the Soviet model did not represent the interests of the working class. As such, Trotskyists[18] referred to the Soviet Union as a "degenerated workers' state" and called its satellites "deformed workers states".[18]

From the moderate liberal viewpoint

Totalitarian communist regimes have been criticized for their one-party dictatorships, totalitarian control of the economy and society and repression of civil liberties by the Council of Europe,[19] economic focus on heavy industry at the expense of consumer goods, sometimes resulting in shortages of vital products or even famine by Leonard E. Hubbard,[20] and militarism and propaganda to cover up the mistakes of the government by Peter Kenez.[21]

From the communist and socialist viewpoints

Within the socialist and communist movements themselves, there are a number of criticisms of using the term "communist states". Left communists,[22] Anarchists and some Trotskyists[23] point out the fact that the so-called "communist" or "socialist" states or "people's states" were actually state capitalist and thus cannot be called "socialist".

The following countries are one-party states in which the institutions of the ruling communist party and the state have become intertwined; hence they fall under the definition of Communist states. They are listed here together with the year of their founding and their respective ruling parties:[24]

However, in modern times it is questionable how communist these countries really are.[26][27][28][29] While these countries share a similar system of government and ideological roots, they make use of diverse approaches to economic organization and activity. In addition, the various communist states now use different terms to identify themselves and their social systems. The only communist state which still traditionally follows Marxist-Leninist doctrine and maintains a largely planned economy is Cuba, which describes itself as "a socialist state guided by ideas of Marx, Engels and Lenin and in transition to a communist society". Cuba has adopted some market reforms, but very little in comparison to China, Vietnam, and Laos and is still very heavily a planned economy. North Korea has even more of a planned economy than Cuba, but officially follows Juche instead of Marxist-Leninism.

There are multi-party states that currently have communist parties in government. Such states are not considered to be communist states as the countries themselves allow for multiple parties, and do not provide a constitutional role for their communist parties.

Moldova is perhaps the best example of a state where there is a large communist party that observes and operates within a democratic state.

Communist parties as part of other ruling coalition

In Cyprus, the ruling Communist party did not come to power by formenting a successful revolution, but rather by being elected to power and thus operate according to the norms of a multi-party system. In Nepal, the ruling Communist parties participate in a multi-party coalition government, an alliance of 22 parties that holds 350 seats in the 601-member constituent assembly. There are also some parties that participate as junior partners in ruling coalitions, as listed below.