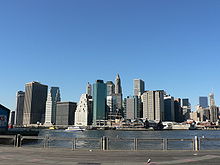 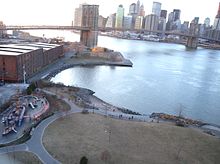 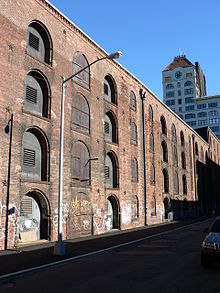 Empire–Fulton Ferry Park, formerly Empire-Fulton Ferry State Park, is a park in Brooklyn, New York, United States. The park is located next to the East River, extending north and south of the Brooklyn Bridge. It was created in 1978 with the purchase of nine run-down warehouses from Con Edison.[1]

The park has been incorporated into Brooklyn Bridge Park, which is operated by an agency of the City of New York, and extends the recreational waterfront area on the East River north and south of the Fulton Ferry Park.

To the south of the park is Fulton Ferry Landing, a large pier and one of the most popular sites for photography in New York City. The Brooklyn Ice Cream Factory sits on the pier. Behind it is the former Marine Company 7 Firehouse from 1924 with a tower for drying fire hoses.

The northern part of the park offers a lawn with picnic tables and a boardwalk with views of the East River, the Brooklyn Bridge, the Manhattan Bridge and Lower Manhattan. It also contains two historic buildings, the Empire Stores buildings and the roofless former Tobacco Warehouse. The Empire Stores are a group of former dry goods storage warehouses from 1869 that are currently unused. Plans call for rehabilitation as part of the future Brooklyn Bridge Park, containing a mix of commercial, retail, and office uses. The Tobacco Warehouse serves as an outdoor entertainment area.

The park was the place where pop group Danity Kane performed as part of the finale of the third season of MTV's Making The Band 3 (and their first concert as a group) on July 24th,2006

This part of Brooklyn Bridge Park is currently closed for construction an expected to open in late summer 2011. It will feature new park plantings, improved lighting, and a restored 1922 carousel housed in a pavilion designed by architect Jean Nouvel, scheduled to open in September 2011.