The John Brown Farm and Gravesite was the home and is the final resting place of abolitionist John Brown. It is located on John Brown Road in North Elba near Lake Placid, New York, where John Brown moved in 1849 to lead freed slaves in farming. In 1855, he moved to Kansas to support his sons' efforts to keep Kansas as a free-state under the popular sovereignty laws, leaving his wife and several of his children behind. Brown returned to visit his family at Lake Placid several times. In 1859, Brown attempted to start a liberation movement among enslaved African Americans by seizing the arsenal at Harpers Ferry, West Virginia. For this, he was tried for treason against the state of Virginia and was hanged. 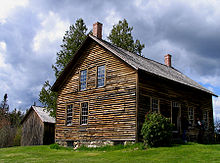 The entire property purchased by John Brown and two sons in 1849 is preserved intact. It was declared a National Historic Landmark in 1998.[2][3]