The New York State Department of Environmental Conservation (NYSDEC or DEC) is responsible for the conservation, improvement, and protection of natural resources within the U.S. state of New York. It was founded in 1970, replacing the previous Conservation Department.[1] The Department manages the Adirondack and Catskill Forest Preserve lands, state forest lands, wildlife management areas and various other state owned public lands of New York. The Department is also responsible for regulating sport fishing, hunting and trapping within the state, and enforcing the State's environmental laws and regulations.

NYSDEC has an annual budget of approximately $1 billion and employs 3,378 people across the state. It manages over 4 million acres (16,000 km²) of protected state-owned land (including all Forest Preserve holdings in the Adirondack and Catskill parks) and another 690,000 acres (2,760 km²) of privately-owned land on which it holds conservation easements. The Department's activities go beyond land management and environmental enforcement to include the publication of a magazine and a state bird atlas, and the operation of a major ski area.

The core of DEC is the conservation functions, which trace their origins to the Forest Preserve Advisory Board set up in 1885 when that land category was created. The first forest rangers were hired and trained to support it. It became the Fisheries, Game and Forest Commission ten years later.

By the early 20th century, it was the Conservation Commission. Departmental status came in 1927 and lasted till 1970.

DEC was created when then governorNelson Rockefeller symbolically signed the legislation creating it on the first Earth Day in 1970. The existing Conservation Department was joined by some programs then part of the state's [[New York State Department of Health Department of Health,and also several other commissions with environmental responsibilities to create the new department along with some brand-new offices.

In its first decade, it took the lead in helping the state comply with newly-passed federal environmental legislation. DEC's work at Love Canal helped draw national attention to the problems posed by hazardous waste sites. It also worked to end General Electric's discharge of PCBs into the Hudson River, an issue that continues into the present day[update]. It implemented New York's first state-level endangered species list.

In the 1980s, DEC was given regulatory authority over storage, transportation, treatment and disposal of hazardous wastes. In this capacity, it helped New York end disposal of radioactive waste at West Valley. The legislature also passed a bottle bill, to be enforced and administered by DEC. The department's facilities at Whiteface and Mt. Van Hoevenberg near Lake Placid were venues for several events at the 1980 Winter Olympic Games.

The decade also saw the department complete, with considerable volunteer help, New York's Atlas of Breeding Birds, a mammoth, exhaustive tome of great interest to birders and ornithologists. DEC efforts have also led to the restoration of several species in the state, including the bald eagle.

The state also began allowing its taxpayers to return a Gift to Wildlife on their income tax forms, providing money directly to DEC for conservation programs.

DEC actions against New York City led to a consent order requiring the city to operate the Fresh Kills landfill under its regulations, which led to its eventual closure. New York has seen an 80% reduction in its operating landfills since 1984. The department also obtained a memorandum of understanding with the city that eventually led to both tougher land-use regulations in the watersheds of its upstate reservoirs and economic development funds for the communities in them.

The 90 mile (140 km) Genesee Valley Greenway was created during this time on abandoned railbed and Genesee Valley Canal property. A new source of funding was opened up when the legislature created the state's Environmental Protection Fund.

The decade that saw New York come under its first Republican administration in 16 years had some worried that DEC would become more submissive to business interests. But the department remained active, taking the lead in establishing the state's Open Space Plan for future land acquisitions.

The summer of 2001 brought a major change to the Department. Since its inception in 1970 the department's headquarters (central office) had been at 50 Wolf Road in Colonie (the current headquarters of the New York State Department of Transportation). In the late 1990s then Gov. George Pataki decided the department needed a new home with views of the Hudson River. He authorized funding to build a new office tower at 625 Broadway in downtown Albany. The building was completed in April 2001 and by late August the entire central office staff had been relocated to the new facility.

DEC employees were active in the cleanup after the September 11, 2001 terrorist attacks in New York City.

In 2006, the DEC started an investigation of the former New York National Guard training range, known as Camp O'Ryan. The concerns at this site include lead contamination from spent bullets, as well as alleged witnessed burial of cylinders of unknown origin. They are presently contacting the New York Division of Military and Naval Affairs and the Army Corps of Engineers for further information on this range.

DEC is headed by a commissioner (until October 2010 it was former assemblyman Pete Grannis) appointed by the governor. He or she reports to the deputy secretary for the environment. Below the commissioner and deputy commissioner are the heads of all offices, divisions, and regional directors.

There are five divisions within this office:

Office of Remediation and Materials Management

This is DEC's legal office. It has four divisions.

Office of Hearings and Mediation Services

This office has no other further divisions. It administers all DEC public hearings and enforcement hearings. It also considers all appeals of denials of requests under New York's Freedom of Information Law. 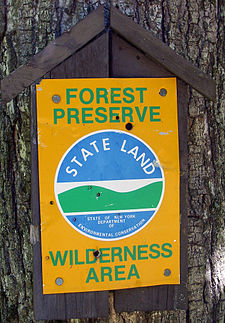 This office handles most of DEC's conservation-related functions.

This office serves to "build and maintain positive working relationships with Legislators and their staffs in order to encourage dialogue and cooperation on matters affecting environmental policy. OLA is charged to present, discuss, and gain passage of the Department's annual legislative program. OLA also serves as a liaison between elected officials and the Department on concerns and issues affecting their constituents." 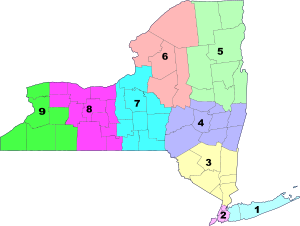 DEC divides the state into nine administrative regions, all groups of counties. All DEC subagencies are represented in each regional office. Some regions have suboffices closer to particular areas of special concern.

Licensing and permitting fees provide the DEC with the majority of its primary operating revenue, at about 58%. Direct funding from the state contributes another 24%, and federal programs and grants make up the remaining 17% difference.

DEC employees range from holders of multiple advanced degrees to clerk/typists who may not even have attended college. They do their work everywhere from the agency's offices to deep wilderness. Almost all DEC positions are classified as civil service and require that applicants pass the appropriate exams to be considered for hiring.

ECOs and forest rangers are considered police officers under New York's Criminal Procedure Law, with the authority to carry firearms at all times and make arrests for any possible criminal violations they witness.

The majority of employees are unionized, with white collar professionals paying dues to the Public Employees Federation, blue-collar workers represented by the Civil Service Employees Association and the law enforcement officers members of the independent New York State Correctional and Police Officers' Benevolent Association, following the same pattern as other state agencies.

DEC frequently works closely on some matters with other agencies at different levels of government.