Civil service
Not to be confused with civilian service.

A civil servant or public servant is a person in the public sector employed for a government department or agency. The term explicitly excludes the armed services, although civilian officials will work at "Defence Ministry" headquarters. The term always includes the (sovereign) state's employees; whether regional, or sub-state, or even municipal employees are called "civil servants" varies from country to country. In the United Kingdom, for instance, only Crown employees are referred to as civil servants, county or city employees are not.

Many consider the study of civil service to be a part of the field of public administration. Workers in "non-departmental public bodies" (sometimes called "QUANGOs") may also be classed as civil servants for the purpose of statistics and possibly for their terms and conditions. Collectively a state's civil servants form its Civil Service or Public Service.

The Roman civil service in action. Mary and Joseph of Nazareth register for the census before Governor Quirinius, mosaic 1315–20.

Administrative institutions usually grow out of the personal servants of high officials, as in the Roman Empire. This developed a complex administrative structure, which is outlined in the Notitia Dignitatum and the work of John Lydus, but as far as we know appointments to it were made entirely by inheritance or patronage and not on merit, and it was also possible for officers to employ other people to carry out their official tasks but continue to draw their salary themselves. There are obvious parallels here with the early bureaucratic structures in modern states, such as the Office of Works or the Navy in 18th century England, where again appointments depended on patronage and were often bought and sold.

Making of Civil Service through merit

The origin[3] of the civil service can be traced back to Imperial examination founded in Imperial China. The Imperial exam based on merit[4] was designed to select the best administrative officials for the state's bureaucracy. This system had a huge influence on both society and culture in Imperial China and was directly responsible for the creation of a class of scholar-bureaucrats irrespective of their family pedigree.

From the time of the Han Dynasty (206 BC to AD 220) until the implementation of the imperial examination system, most appointments in the imperial bureaucracy were based on recommendations from prominent aristocrats and local officials whilst recommended individuals were predominantly of aristocratic rank. Emperor Wu of Han started an early form of the imperial examinations, transitioning from inheritance and patronage to merit, in which local officials would select candidates to take part in an examination of the Confucian classics. The system reached its apogee during the Song dynasty.[5]

The modern examination system for selecting civil service staff also indirectly evolved from the imperial one.[6] This system was admired and then borrowed by European countries from the 16th century onward,[7] and is now the model for most countries around the world.

Civil servants in Brazil, Servidores públicos in Portuguese, are those working in the executive, legislative and judicial branches of the federal government, state government, municipal government and the Government of Brasilia, including congressmen, senators, mayors, ministers, the president of the republic, and workers in Government-owned corporation. Civil servants are hired on the basis of entrance examinations known as Concurso Público in Portuguese. There are several companies with a government mandate to conduct the testing; the best known are CESPE, which belongs to the University of Brasilia, the Getulio Vargas Foundation, ESAF, and the Cesgranrio Foundation, which is part of the Federal University of Rio de Janeiro. The positions are filled according to examination score and the number of vacancies.

Canada's public service is a body with less than 10 departments and 450,000 members, including commissions, councils, crown corporations, the Office of the Queen's Privy Council for Canada, and the Royal Canadian Mounted Police. Each provincial government also has its own public service. In 2010, all provincial governments' public service were employing a total of more than 350 000 persons[8]. When taking into account the three levels of governance in Canada (federal; provincial and territorial; local) for the same year, the Canadian public service in general employs more than 3.6 million individuals, which represents 21.2 % of all jobs in the country[9]. 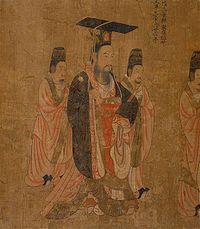 Emperor Wen of Sui (r. 581–604), who established the first civil service examination system in China; a painting by the chancellor and artist Yan Liben (600–673).

One of the oldest examples of a civil service based on meritocracy is the Imperial bureaucracy of China, which can be traced as far back as the Qin Dynasty (221–207 BC). During the Han Dynasty (202 BC–220 AD) the xiaolian system of recommendation by superiors for appointments to office was established. In the areas of administration, especially the military, appointments were based solely on merit.

After the fall of the Han Dynasty, the Chinese bureaucracy regressed into a semi-merit system known as the Nine-rank system; in this system noble birthright became the most significant prerequisite for gaining access to more authoritative posts.

This system was reversed during the short-lived Sui Dynasty (581–618), which initiated a civil service bureaucracy recruited through written examinations and recommendation. The following Tang Dynasty (618–907) adopted the same measures for drafting officials, and decreasingly relied on aristocratic recommendations and more and more on promotion based on the results of written examinations.

However, the civil service examinations were practiced on a much smaller scale in comparison to the stronger, centralized bureaucracy of the Song Dynasty (960–1279). In response to the regional military rule of jiedushi and the loss of civil authority during the late Tang period and Five Dynasties (907–960), the Song emperors were eager to implement a system where civil officials would owe their social prestige to the central court and gain their salaries strictly from the central government. This ideal was not fully achieved since many scholar officials were affluent landowners and were engaged in many anonymous business affairs in an age of economic revolution in China. Nonetheless, gaining a degree through three levels of examination — prefectural exams, provincial exams, and the prestigious palace exams — was a far more desirable goal in society than becoming a merchant. This was because the mercantile class was traditionally regarded with some disdain by the scholar official class. This class of state bureaucrats in the Song period were far less aristocratic than their Tang predecessors. The examinations were carefully structured in order to ensure that people of lesser means than what was available to candidates born into wealthy, landowning families were given a greater chance to pass the exams and obtain an official degree. This included the employment of a bureau of copyists who would rewrite all of the candidates' exams in order to mask their handwriting and thus prevent favoritism by graders of the exams who might otherwise recognize a candidate's handwriting. The advent of widespread printing in the Song period allowed many more examination candidates access to the Confucian texts whose mastery was required for passing the exams.

The civil service in France (fonction publique) is often considered to include government employees, as well as employees of public corporations.

Main article: Civil service of the Republic of Ireland

The civil service of Ireland includes the employees of the Department of State (excluded are government ministers and a small number of paid political advisors) as well as a small number of core state agencies such as the Office of the Revenue Commissioners, the Office of Public Works, and the Public Appointments Service. The organisation of the Irish Civil Service is very similar to the traditional organization of the British Home Civil Service, and indeed the grading system in the Irish Civil Service is nearly identical to the traditional grading system of its British counterpart. In Ireland, public sector employees such as teachers or members of the country's police force, An Garda Síochána are not considered to be civil servants, but are rather described as "public servants" (and form the Public service of the Republic of Ireland).

The civil service in Spain (funcionariado) is often considered to include government employees, "Comunidades Autónomas" employees, as well as municipal employees. There are three main categories of Spanish civil services; political posts ("puestos de libre designación, level 28-30") requiring simple or no examinations, posts called "funcionarios de carrera" requiring an examination, and "personal laboral" posts, also with an exam similar to that for the "funcionarios de carrera". Examinations differ among the states, the 17 autonomic communities and the city councils, and the "funcionarios" and "personal laboral" exams vary in difficulty from one location to another.

In the United States, the civil service was established in 1872. The Federal Civil Service is defined as "all appointive positions in the executive, judicial, and legislative branches of the Government of the United States, except positions in the uniformed services." (5 U.S.C. § 2101). In the early 19th century, government jobs were held at the pleasure of the president — a person could be fired at any time. The spoils system meant that jobs were used to support the political parties. This was changed in slow stages by the Pendleton Civil Service Reform Act of 1883 and subsequent laws. By 1909, almost 2/3 of the U.S. federal work force was appointed based on merit, that is, qualifications measured by tests. Certain senior civil service positions, including some heads of diplomatic missions and executive agencies are filled by political appointees. Under the Hatch Act of 1939, civil servants are not allowed to engage in political activities while performing their duties.

U.S. state and local government entities often have competitive civil service systems that are modeled on the national system, in varying degrees.

As of January 2007, the Federal Government, excluding the Postal Service, employed about 1.8 million civilian workers. The Federal Government is the Nation's single largest employer. Although most federal agencies are based in the Washington D.C. region, only about 16% (or about 288,000) of the federal government workforce is employed in this region.[10]

There are currently 15 federal executive branch agencies and hundreds of subagencies.[11]

Civil service also means a form of legal conscientious objection, for example the Swiss Civilian Service. More accurately, in this scope civil service is work performed in the public interest as a replacement for a military obligation to which one objects. The Finnish "siviilipalvelus", French "service civil", German "Zivildienst", Italian "servizio civile" and Swedish "civiltjänst" all can be translated as "civil service" in this sense.