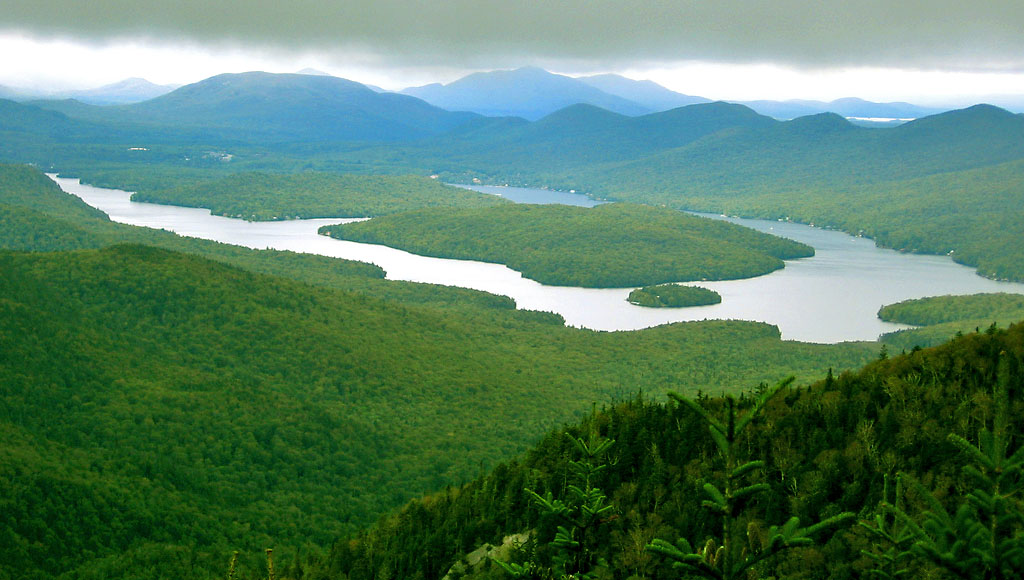 imagesize =
image_caption = The lake after which the village is named

The Village of Lake Placid is near the center of the Town of North Elba, 40 miles southwest of Plattsburgh. Lake Placid, along with nearby and , comprise what is known as the Tri-Lakes region.

Lake Placid was founded in the early 1800s to develop a mining operation based on ore discovered nearby. By 1840, the population of "North Elba" (four miles southeast of the present village near where the road to the Adirondack Loj crosses the Ausable River) consisted of six families. In 1845, Gerrit Smith arrived in North Elba and not only bought a great deal of land around the village, he also granted large tracts to his slaves, reforming the land law and reflecting his support of .

The abolitionist John Brown heard about Gerrit Smith's reforms, and left his anti-slavery activities in Kansas to buy convert|244|acre|km2|1 of land, which later became known as the "Freed Slave Utopian Experiment," "Timbucto". Upon his execution in 1859, John Brown asked to be buried on his farm, which is preserved as the John Brown Farm State Historic Site.

As leisure time increased in the late 19th century, Lake Placid was discovered by the rich and famous, who were drawn to the fashionable . , inventor of the , designed what was then called "Placid Park Club" in 1895 and inspired the village to change its name to Lake Placid. Dewey kept the club open through the winter in 1905, which aided the development of winter sports in the area (although nearby Saranac Lake had hosted an international winter sporting event as early as 1889). By 1921, the area could boast a , venue and ski association, and in 1929, Dr. Godfrey Dewey, Melvil's son, was able to convince the (IOC) that Lake Placid had the best winter sports facilities in the nation. [Fea, John, in Findling, John E. and Pelle, Kimberly D., editors, "Encyclopedia of the Modern Olympic Movement", Greenwood Press, 2004. ISBN-13: 978-0313322785. p. 297] The Lake Placid Club was the headquarters for the IOC for the 1932 and the in Lake Placid.

Lake Placid is best known as the two-time site of the . In the United States, the village is especially remembered as the site of the 1980 USA-USSR hockey game, the "," when a group of American college students and amateurs upset the heavily favored 4-3 and two days later won the gold medal. The victory is often ranked as the greatest in American sports history. It is also the site of the Olympic Oval, where won his five Olympic gold medals.

Lake Placid also hosted the . Along with , , and , it is one of the three places to have twice hosted the . Lake Placid was the first location in North America to host two Olympic games. became the other when it hosted the for the second time in 1984.

, a resident of the village, became the first person to win two gold medals when he doubled in speed skating at the 1932 Winter Olympics. He carried the Olympic torch through Lake Placid in 2002 shortly before his death. [ [http://news.bbc.co.uk/winterolympics2002/hi/english/skating/newsid_1776000/1776146.stm BBC Winter Olympics] ] His grandson, , competed in the in in his honor, winning gold in the Skeleton.

On November 20th, 1995, two-time Olympic Gold medalist n figure skater collapsed and died from a massive heart attack while he and his wife were practicing in Lake Placid for their upcoming performance in the 1995-1996 tour.

Lake Placid is well-known among winter sports enthusiasts for its skiing, both Alpine and cross-country. (4,867 feet), in nearby Wilmington about convert|13|mi|km|0 from Lake Placid, offers skiing, hiking, gondola rides, and mountain biking, and is the only one of the High Peaks that can be reached via an auto road. The area has one of only three bobsled rides in the western hemisphere, and is one of the few places in the contiguous United States which offers and sleigh rides.

Many people use Lake Placid as a base from which to climb the forty-six High Peaks in the ; those who complete these climbs may join the Adirondack Forty-Sixers.

Lake Placid built its first golf course in 1898, one of the first in the United States, and has more golf courses than any other region in the Adirondacks. Many of its courses were designed by famous golf course architects such as John Van Kleek, Seymour Dunn, Alexander H. Findlay, and Alister MacKenzie. The geographic features of the Adirondacks were considered reminiscent of the Scotland mountains where the game was invented, and thus a fitting canvas for original play, or "mountain golf."

Lake Placid is near the West Branch of the Ausable River, a well-known stretch of water for fly fishing. More than six miles (10 km) of the West Branch is year-round catch-and-release, artificial-lures-only water.

* Since 1999 it has been a site for the annual , one of only six official Ironman Triathlons to be held in the continental U.S.
* ESPN's Great Outdoor Games were inaugurated here in July 2000; they were held in Lake Placid again the following year, but moved to Madison, Wisconsin, in 2002 and were eventually discontinued.
* The Lake Placid and I Love New York Horse Shows have been held at the North Elba Showgrounds for the past 37 years.
* Nearby hosts an Annual Winter Carnival, one of the oldest Winter Carnivals in the country, complete with an Ice Palace.
* Lake Placid is also home to the Lake Placid Sinfonietta, a professional summer chamber orchestra that has existed since 1917 and offers concerts lakeside.
* The Winter are held in Lake Placid every February.

Lake Placid is served by nearby in Saranac Lake, convert|16|mi|km|0 from the village. , two miles south of the village, does not offer scheduled flights.

Other relatively nearby airports include and . Lake Placid is also served by an Thruway Motorcoach connection through Westport via limousine service. In addition, Lake Placid is served by Adirondack Trailways of the .

Lake Placid is not located on any interstate highway. It can be reached from to the east via , , and . County Roads 21, 31 and 35 also serve the community.