Saranac Lake is a village located in the state of New York, United States. As of the 2000 census, the population was 5,041. The village is named after Upper, Middle, and Lower Saranac Lakes, which are nearby.

The Village of Saranac Lake covers parts of three towns (Harrietstown, St. Armand, and North Elba) and two counties, Franklin and Essex. The village boundaries do not touch the shores of any of the three Saranac Lakes; Lower Saranac Lake is a half mile west of the village. The northern reaches of Lake Flower, which is part of the Saranac River, lie within the village. The town of Saranac is an entirely separate entity, 33 miles (53 km) to the northeast.

The village lies within the boundaries of the Adirondack Park, about seven miles (11 km) from Lake Placid. These two villages, along with nearby Tupper Lake, comprise what is known as the Tri-Lakes region.

Saranac Lake was named the best small town in New York State and ranked 11th in the United States in The 100 Best Small Towns in America.[1] In 1998 the National Civic League named Saranac Lake an All-America City and in 2006 the village was named as one of the "Dozen Distinctive Destinations" by the National Trust for Historic Preservation.[2] The village has 186 buildings that are listed on the National Register of Historic Places.

The area was first settled in 1819 by the Jacob Smith Moody family, from Keene, New Hampshire. Later settlers Pliny Miller and Alric Bushnell established a logging facility with a dam and sawmill in 1827, forming the basis for the village. The first school was built in 1838, and in 1849, William F. Martin built one of the first hotels in the Adirondacks— the "Saranac Lake House", known simply as "Martin's"— on the southeast shore of Lower Saranac Lake. Martin's would soon become a favorite place for hunters, woodsmen, and socialites to meet and interact.

The village of Saranac Lake, with Lake Flower below and Lake Colby above, from Scarface Mountain to the Southeast.

In 1876 Dr. Edward Livingston Trudeau arrived to treat his own tuberculosis; in 1884 he founded his Adirondack Cottage Sanitarium, starting with a small cottage, called "Little Red", where two tubercular sisters from New York City became the first patients. Little Red, the first "cure cottage", was built on a small patch of land on the backside of Mount Pisgah which was purchased for Trudeau by several of his hunting guides. As more and more patients visited the region, including author Robert Louis Stevenson in 1887, Trudeau's fame grew.[3] Soon, the sanitarium had grown so that it was entitled to its own post office, which would sort and deliver mail to its many patients. The Trudeau Institute, an independent medical research center, evolved from the Trudeau's work for the sanitarium. In 1964, the Trudeau Institute began researching the functions of the immune system and how it guards against many infectious diseases, including tuberculosis.

Telephone service was introduced in 1884, and the Chateaugay Railroad reached Saranac Lake from Plattsburgh in 1887.

The village was incorporated on June 16, 1892, and Dr. Trudeau was elected the first village president soon thereafter. Electricity was introduced on September 20, 1894, by installing water wheels on the former site of Pliny Miller's mill. Paul Smith, an important figure in the history of the village, purchased the Saranac Lake Electricity Co. in 1907, forming the Paul Smith's Electric Light and Power and Railroad Company, which eventually became part of Niagara-Mohawk. At the same time, the village began to stabilize, with public schools, fire and police departments, and other municipal facilities forming.

Starting in the 1890s and for the next 60 years, "Saranac Lake was the Western Hemisphere's foremost center for the treatment of pulmonary tuberculosis." [4] An effective antibiotic was first used on human TB patients in 1921, but only after World War II did it begin to be widely used in the US. Thereafter, sanatorium treatment began to lose its importance, being phased out completely by 1954, when the sanatorium's last patient, Larry Doyle, left. Among the last of the prominent patients that sought treatment for Tuberculosis was Manuel Luis Quezon y Molina, the first Filipino president of the Commonwealth of the Philippines, who died in Saranac Lake of tuberculosis, August 1, 1944.

But the village's preeminence in tuberculosis care had lasting consequences beyond the many large, handsome private cure cottages that were left vacant after the patients were gone. The effect of the hundreds of patients and doctors from all over the world who came to live in the village, many of them prominent in business, literature, science or another field, many of whom stayed for years, cannot be overestimated. Combined with the area's popularity with the power elite, who built their Great Camps on the nearby Saranac and Saint Regis Lakes, the effect was to change the sleepy village of 300 of the 1880s into the vibrant "little city" of 8,000, as the village has referred to itself for many years. 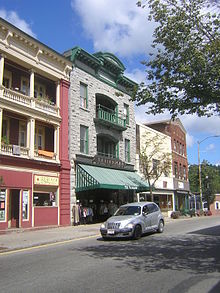 Mark Twain vacationed on Lake Flower in 1901 [6] at the height of his fame. While there, he wrote a Conan Doyle spoof, "A Double-Barreled Detective Story".[7]

Saranac Lake became an especially busy town in the 1920s, with the construction of the Hotel Saranac and several new, permanent buildings after multiple fires destroyed a large part of downtown. Bootlegging was common in the village. Legs Diamond visited his brother Eddy, who had tuberculosis and attempted a cure at a local cottage sanatorium.[7] During the 20s, entertainer Al Jolson and president Calvin Coolidge were semi-frequent visitors to the village— Jolson once performed a solo for three hours at the Pontiac Theater on Broadway.

Beginning in 1936, Albert Einstein had a summer home in Saranac Lake, renting the cottage of local architect William L. Distin; he could often be seen sailing with his wife on Lake Flower.[7] He was a frequent summer house guest at Louis Marshall's cottage at Knollwood Club on Lower Saranac Lake during World War II, and it was there on August 6, 1945 that he heard on the radio that that atom bomb had been dropped on Hiroshima; he gave his first interview after the event at Knollwood, on August 11.[7]

In 1954, Saranac Lake hosted the world premiere of the Biblical epic film The Silver Chalice, Paul Newman's film debut. Several of the stars, including Virginia Mayo visited the village and participated in the winter carnival parade.

In recent years,[when?] Saranac Lake has become a more conventional tourist destination. New York's governor, Andrew Cuomo, has been coming there ever since he was a teenager and regularly vacations there with his family.[8] The Hotel Saranac, is a memorable early 20th century Deco structure. The former sanatorium is now the corporate call center for the American Management Association.

Many tourists come to the village, which is very picturesque owing to its setting and the preservation of unique older architecture. Much of the village fronts on Lake Flower, which was created by a dam in the Saranac River and named after Governor Roswell P. Flower.

Summer visitors enjoy canoeing and other forms of boating, hiking in the forest, climbing in the nearby mountains, and visiting the local shops and restaurants. In the summer the Village of Saranac Lake offers free concerts in Riverside Park on Lake Flower and the Berkley Green Park. Camping is also a popular pastime in the Saranac Lake region (List of area's state campgrounds).

During winters, cross-country and downhill skiing, snowshoeing, ice skating, snowmobiling are popular activities. There is also an annual one week-long winter carnival, an event that has brought people together in celebration of winter since 1898. Each year the carnival is given a theme - 2011's theme will be "Medieval Times." The Winter Carnival parade reflects the theme, and Garry Trudeau, the creator of the comic strip Doonesbury who grew up in the town, creates artwork with characters from his comic strip doing things related to the theme for a button that can be purchased each winter. The carnival's main attraction is the ice palace, which is made with blocks of ice taken from Lake Flower and illuminated with colored lights, along with various winter activities and competitions. These include a parade, which normally has several Bagpipe and drum marching bands and the always favorite Lawn Chair Ladies, along with more usual floats and local school bands. Each year a Winter Carnival King and Queen, who preside over carnival activities, are selected from village residents based upon their contribution to Saranac Lake, while the prince and princess are from the two local colleges, North Country Community College and Paul Smith's College. There is also a winter rugby game. 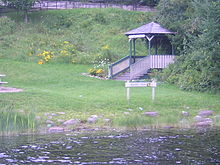 A non-profit Village Improvement Society, dating from 1910, currently owns and maintains eight parks. The extensive parkland along the lakefront, now owned by the village, is the result of the Society's earlier efforts.

Every year the popular Can Am Rugby Tournament, the largest such tournament in the Western Hemisphere, is held in the village.

The composer Béla Bartók spent summers in Saranac Lake and wrote some of his best-known works there. The writer Robert Louis Stevenson had a cottage in Saranac Lake, which still stands along with a museum dedicated to him.

After the local Ames Department Store closed due to bankruptcy and residents were forced to travel 50 miles to Plattsburgh for staples, the town was approached by Walmart which offered to build a 250,000 square foot supercenter, but it was felt by the community that Walmart would negatively impact local business and increase traffic. As an alternative a community-owned store was organized and shares were sold to community residents. $500,000 was raised by about 600 residents who made an average investment of $800. goal last spring. The store, Saranac Lake Community Store, opened in October 29, 2011 in remodeled facilities in downtown Saranac Lake.[9]

The Adirondack Regional Airport is 8 miles (13 km) northwest of the village. Adirondack Trailways serves Saranac Lake, and is part of the Greyhound Lines bus system.

The Saranac River runs though the village.

The village is located at the junction of the Towns of North Elba and St.Armand in Essex County, and Harrietstown in Franklin County. 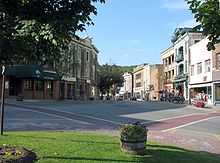 Broadway, with Main St. at left

There were 2,369 households out of which 25.4% had children under the age of 18 living with them, 35.2% were married couples living together, 10.3% had a female householder with no husband present, and 50.1% were non-families. 40.7% of all households were made up of individuals and 14.7% had someone living alone who was 65 years of age or older. The average household size was 2.09 and the average family size was 2.88.

While the region's cool, clear air was part of what made Saranac Lake famous, it can be a challenge. Winters are quite cold and it is not uncommon for the village to be the coldest place in the continental United States.[12] Spring is late and cool, summer short with cool evenings, and fall is early and crisp. The weather is famously changeable, and even short-range weather forecasts are often proven wrong. Lake-effect snow is common, and the town gets a substantial amount of it in the late fall and early winter. Sometimes the town can be buried in as much as 2 feet of lake-effect snow in December.

The village of Saranac Lake, bottom, with Lower Saranac Lake, above, from Baker Mountain, to the East. Lake Flower is at lower left.