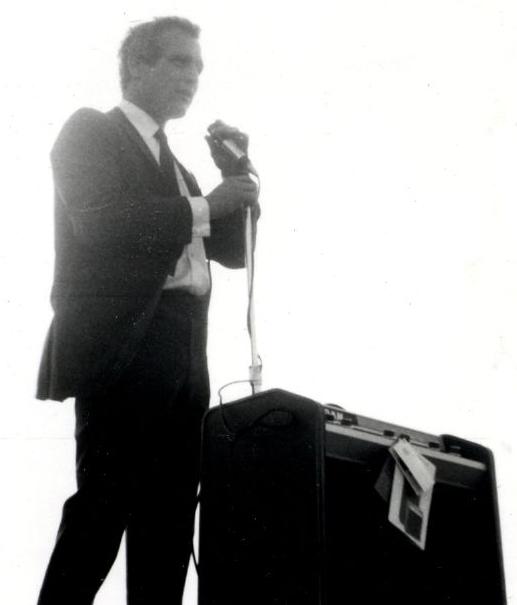 Newman was a co-founder of , a food company from which Newman donated all post-tax profits and royalties to charity.

Newman was born in (a suburb of ), the son of Theresa (née Fetzer or Fetsko; Slovak: Terézia Fecková)

Newman showed an early interest in the theater, which his mother encouraged. At the age of seven, he made his acting debut, playing the court jester in a school production of "Robin Hood". Graduating from in 1943, he briefly attended in , where he was initiated into the fraternity.

Newman served in the Navy in in the Pacific theater. Newman was sent to the Navy V-12 program at , hoping to be accepted for pilot training, but this failed when it was discovered he was color blind.

Newman appeared in a screen test with for "East of Eden" (1955). Newman was testing for the role of Aron Trask; Dean was testing for the role of Aron's fraternal twin brother, Cal Trask. Dean won the part of Cal, while the role Newman was up for went to . The same year Newman would co-star with and in a live —and —television broadcast of the stage play "". In 2003 would act in a remake of "Our Town", taking on Sinatra's role as the stage manager.

Twenty-five years after "The Hustler", Newman reprised his role of "Fast" Eddie Felson in the -directed "" (1986), for which he won the Academy Award for Best Actor.

In 2003, he appeared in a revival of 's "", receiving his first nomination for his performance. and the cable network aired a taping of the production, and Newman was nominated for an for Outstanding Lead Actor in a Miniseries or TV Movie.

His last screen appearance was as a conflicted mob boss in the 2002 film "" opposite , although he continued to provide voice work for films. In keeping with his strong interest in car racing, he provided the voice of Doc Hudson, a retired race car in Disney/'s "Cars". Similarly, he served as narrator for the 2007 film "Dale", about the life of the legendary driver , which turned out to be Newman's final film performance in any form.

With writer , Newman founded , a line of products, in 1982. The brand started with salad dressing, and has expanded to include sauce, , , salsa, and wine, among other things. Newman established a policy that all proceeds from the sale of Newman's Own products, after taxes, would be donated to charity. As of early 2006, the franchise has resulted in excess of $200 million in donations. He co-wrote a about the subject with Hotchner, "Shameless Exploitation in Pursuit of the Common Good". Among other awards, Newman's Own co-sponsors the , a $25,000 reward designed to recognize those who protect the First Amendment as it applies to the written word. His daughter, , took the helm of the company with his death. [ [http://www.news.com.au/heraldsun/story/0,21985,24149703-663,00.html "Paul Newman says he will die at home."] "". August 9, 2008.]

One beneficiary of his is the , a residential summer camp for seriously ill children, which is located in Ashford, . Newman cofounded the camp in 1988; it was named after the gang in his film "" (1969). Newman's college fraternity, , adopted "Hole in the Wall" as their "national philanthropy" in 1995. One camp has expanded to become several Hole in the Wall Camps in the U.S., Ireland, France and Israel. The camp serves 13,000 children every year, free of charge.

On June 1, 2007, announced that Newman had donated $10 million to the school to establish a scholarship fund as part of the college's current $230 million fund-raising campaign. Newman and Woodward were honorary co-chairs of a previous campaign.

Paul Newman was one of the founders of the Committee Encouraging Corporate Philanthropy (CECP), a membership organization of CEOs and corporate chairpersons committed to raising the level and quality of global corporate philanthropy. Founded in 1999 by Newman and a few leading CEOs, CECP has grown to include more than 175 members and, through annual executive convenings, extensive benchmarking research, and best practice publications, leads the business community in developing sustainable and strategic community partnerships through philanthropy. [ [http://www.corporatephilanthropy.org CECP - Committee Encouraging Corporate Philanthropy ] ]

Newman was married twice. His first marriage to Jackie Witte lasted from 1949 to 1958. Together they had a son, Scott (1950), and two daughters, Susan Kendall (1953) and Stephanie. Scott Newman, who died in November 1978 from an accidental , [Clark, Hunter S. [http://www.time.com/time/magazine/article/0,9171,960672,00.html?promoid=googlep "People"] . Time magazine. February 17, 1986.] appeared in the films "Breakheart Pass", "" and the 1977 film "Fraternity Row". Paul Newman started the Scott Newman Center for drug abuse prevention in memory of his son. [ [http://www.scottnewmancenter.org/ "Welcome"] . Scott Newman Center.org.] Susan is a documentary filmmaker and and has Broadway and screen credits, including a starring role as one of four Beatles fans in 1978's "I Wanna Hold Your Hand". She also received an Emmy nomination as co-producer of his telefilm, "The Shadow Box". Newman had two grandsons.

For his strong support of in 1968 (and effective use of television commercials in California), Newman was 19th on 's enemies list. [http://web.archive.org/web/20030621235432/www.artsci.wustl.edu/~polisci/calvert/PolSci3103/watergate/enemy.htm]

Consistent with his work for liberal causes, Newman publicly supported 's candidacy in the 2006 Connecticut Democratic Primary against Senator , and was even rumored as a candidate himself until Lamont emerged as a credible alternative. He had donated to Chris Dodd's presidential campaign. [ [http://www.wfsb.com/politics/12281464/detail.html?rss=hart&psp=news "Dodd Gets Financial Boost From Celebs"] . WFSB.com. 17 Apr 2007.]


Nationality =
Years = 1979
Team(s) = Dick Barbour Racing
Best Finish = 2nd (1979)
Class Wins = 1 (1979)
Newman was an avid auto racing enthusiast, and first became interested in ("the first thing that I ever found I had any grace in") while training for and filming "", a 1969 film. Newman's first professional event was in 1972, in , and he was a common competitor in events for the rest of the decade, eventually winning several championships. He later drove in the in Dick Barbour's and finished the race in second place.

From the mid-'70s to the early '90s, he drove for the Bob Sharp Racing team, racing mainly s (later rebranded as Nissans) in the . He became heavily associated with the brand during the '80s, even appearing in commercials for them. At the age of 70 he became the oldest driver to be part of a winning team in a major sanctioned race,Fact|date=September 2008 winning in his class at the 1995 .

Newman initially owned his own racing team, which competed in the series, but later co-founded Newman/Haas Racing with , a team, in 1983. The 1996 racing season was chronicled in the film "", which Newman narrated. He was also a partner in the team . Newman also owned a car NASCAR Winston Cup before selling it to , where it now serves as the #12 car.

As director or producer

has been celebrated at , , , and other American colleges since the 1970s.