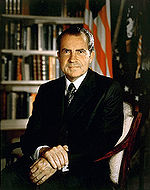 Nixon’s Enemies List is the informal name of what started as a list of President of the United States Richard Nixon’s major political opponents compiled by Charles Colson, written by George T. Bell[1] (assistant to Colson, special counsel to the White House), and sent in memorandum form to John Dean on September 9, 1971. The list was part of a campaign officially known as “Opponents List” and “Political Enemies Project.” The list became public knowledge when Dean mentioned during hearings with the Senate Watergate Committee that a list existed containing those whom the president did not like. Journalist Daniel Schorr, who happened to be on the list, managed to obtain copies of it later that day.[2] 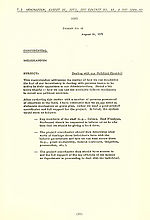 The official purpose, as described by the White House Counsel's Office, was to "screw" Nixon's political enemies, by means of tax audits from the Internal Revenue Service, and by manipulating "grant availability, federal contracts, litigation, prosecution, etc."[3]

In a memorandum from John Dean to Lawrence Higby (August 16, 1971), Dean explained the purpose of the list succinctly:

The original 20 names in the memo (and the notes accompanying them) were as follows, although a master list of Nixon political opponents was developed later. 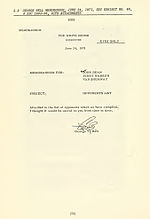 Attached is the list of opponents which we have compiled. I thought it would be useful from time to time. 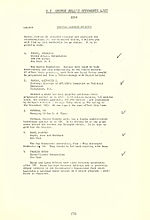 Having studied the attached material and evaluated the recommendations for the discussed action, I believe you will find my list worthwhile for go status. It is in priority order.

United Artists Corporation
929 7th Avenue
New York, N. Y.
Top Muskie fundraiser. Success here could be both debilitating and very embarrassing to the Muskie machine. If effort looks promising, both Ruth and David Picker should be programmed and then a follow-through with United Artists.

National director of A.F.L.-C.I.O.’s Committee on Political Education
Washington, D. C.
Without a doubt the most powerful political force programmed against us in 1968. ($10 million dollars, 4.6 million votes, 115 million pamphlets, 176,000 workers — all programmed by Barkan’s C.O.P.E. — so says Teddy White in The Making of the President 1968). We can expect the same effort this time.

Managing Editor L. A. Times
Guthman, former Kennedy aide, was a highly sophisticated hatchetman against us in '68. It is obvious he is the prime mover behind the current Key Biscayne effort. It is time to give him the message.

Doyle, Dane and Bernbach
New York
The top Democratic advertising firm — they destroyed Goldwater in ’64. They should be hit hard starting with Dane.

Dyson-Kissner Corporation
New York
Dyson and Larry O’Brien were close business associates after ’68. Dyson has huge business holdings and is presently deeply involved in the Businessmen’s Educational Fund which bankrolls a national radio network of five-minute programs, anti-Nixon in character. 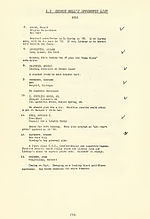 Dreyfus Corporation
New York
Heaviest contributor to McCarthy in ’68. If McCarthy goes, will do the same in ’72. If not, Lindsay or McGovern will receive the funds.

Leading executive at Common Cause
A scandal would be most helpful here.

Senator Jackson’s AA
711 Lamberton Drive, Silver Spring, Md.
We should give him a try. Positive results would stick a pin in Jackson’s white hat.

President
Council for a Livable World
Heavy far left funding. They will program an “all court press” against us in ’72. 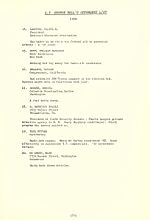 Congressman, California
Had extensive EMK-Tunney support in his election bid. Success might help in California next year.

On December 20, 1973, the Congressional Joint Committee on Internal Revenue Taxation concluded that people on the "Enemies" list had not been subjected to an unusual number of tax audits. The report revealed a second list of about 576 (with some duplicates) supporters and staffers of George McGovern's 1972 presidential campaign given to Internal Revenue Commissioner Johnnie Walters by John Dean on September 11, 1972. This list includes relatively few celebrities. The Washington Post printed the entire list the next day, but the New York Times reported just a few paragraphs on page 21.[5][6]

Newsman Daniel Schorr, as well as actors Paul Newman and Carol Channing have stated, separately, that inclusion on the list was their greatest accomplishment. When this list was released, Schorr read it live on television, not realizing that he was on the list until he came to his own name.[7] Talk show host and journalist Lou Gordon, who was also on the list, considered his inclusion to be a "badge of honor".[8]

In Philip Roth's Our Gang, which was published in 1971, two years before the list was first mentioned in public, the Nixon parody character Trick E. Dixon begins to compile a rudimentary list of five political enemies. It includes Jane Fonda and the Black Panthers who were on the real-life counterpart, The Berrigans (who perhaps surprisingly were not) and Curt Flood.

In The Great Shark Hunt, Hunter S. Thompson expresses disappointment in not having been included on the list.

Carl Djerassi's autobiography The Pill, Pigmy Chimps, and Degas' Horse states that President Nixon awarded him the National Medal of Science when he was on the Enemies List. He learned this from an article in The San Francisco Examiner a few months later.

In the United States the term "enemies list" has come to be used in contexts not associated with Richard Nixon. For example, satirist P. J. O'Rourke's 1989 "A Call for a New McCarthyism" in The American Spectator has a hybrid blacklist and enemies list, suggesting that, contrary to the spirits of these lists, the subjects there should be overexposed, not suppressed, "so that a surfeited public rebels in disgust."

In "Homer's Enemy", an 8th-season episode of The Simpsons, Moe Syzlak shows off his own enemies list, which Barney Gumble quickly appraises as Nixon's list, with the latter's name crossed out and replaced with Moe's. Barney is added to the list for his insolence. Another episode, Homer the Great, had Homer expressing anger at a shoddily-made "Econo-Save Factory Stool" that breaks and causes him to fall, and remarks "OK, Econo-Save, you just made the list!" Homer proceeds to add the company's name to a list.