A French Aide-de-camp (right) assisting a General of Division (centre), during the Napoleonic wars.

An aide-de-camp (French for camp assistant) is a personal assistant, secretary, or adjutant to a person of high rank, usually a senior military officer or a head of state. The first aide-de-camp is typically the foremost personal aide.

In some countries, the aide-de-camp is considered to be a title of honor (which confers the post-nominal letters ADC or A de C), and participates at ceremonial functions.

The badge of office for an aide-de-camp is usually the aiguillette, a braided cord in gold or other colors, worn with a uniform on the left (or sometimes right) shoulder.

In Argentina, three officers (one from each armed service, of the rank of lieutenant colonel or its equivalent), are appointed as aide-de-camp to the President of the Republic and three others to the Minister of Defense, these six being the only ones to be called "edecán", which is one Spanish translation for aide-de-camp ("ayudante de campo" is another – "edecán" is a phonetic imitation of the French term; "ayudante de campo" is a word-for-word translation of it).

A controversy was raised in 2006, when president Néstor Kirchner decided to promote his Army aide-de-camp, Lt. Col. Graham to colonel, one year ahead of his class.

Upon taking office, current president Cristina Kirchner, decided to have, for the first time, female officers as her aides-de-camp.

In each of the armed forces, the chief of staff and other senior officers have their own adjutants, normally of the rank of major or lieutenant colonel, or its equivalent.

At unit level, the unit S-1 (personnel officer) doubles as the unit commander's adjutant, although in recent times in many units this practice has been left only for ceremonial purposes, while for everyday duties a senior NCO performs the adjutant's activities.

An aiguillette is worn on the right shoulder by aides-de-camp and adjutants as a symbol of their position, the colour of the aiguillette depending of the rank of the person they are serving (there are golden, tan, silver and red aiguillettes, as well as an olive green one for combat uniform).

Charles James Esquire's Military Dictionary (1810) pp 29–30 stated that an aide-de-camp was an officer appointed to attend a general officer and is seldom under the grade of captain: “The King may appoint for himself as many as he pleases, which appointment gives the rank of colonel in the army. Generals being field marshals, have four, lieutenant generals two, major generals one”.

In British colonies and modern-day British Overseas Territories, the aide-de-camp is appointed to serve the governor.

In 1973, the Governor of Bermuda, Sir Richard Sharples, and his aide-de-camp, Captain Hugh Sayers, were murdered on the grounds of Government House.

On the last day of British rule in Hong Kong on 30 June 1997, the police aide-de-camp to Governor Chris Patten presented Patten with the flag at Government House. He then gave the Vice Regal Salute before proceeding, with the Pattens, to leave Government House for the last time.

Prince Charles is a Personal Aide-de-Camp to Queen Elizabeth II.

Australian Defence Force officers serve as aides-de-camp to specific senior appointments, such as the Queen, Governor-General, state governors, Defence Force Chiefs and other specified Army, Navy and Air Force command appointments. Honorary aides-de-camp to the Governor-General or state governors are entitled to the post-nominal ADC during their appointment. Officers of and above the ranks of Rear Admiral, Major General and Air Vice Marshal in specifically designated command appointments are entitled to an aide de camp with the Army rank of Captain (or equivalent). Within the Navy, an aide-de-camp is called a "Flag Lieutenant" (as senior Naval Officers are "Flag Officers"). 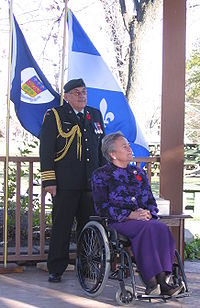 Aides-de-camp in Canada are appointed to the Queen and certain other members of the royal family, the governor general, lieutenant governors, and to certain other appointments (e.g., Minister of National Defence, flag/general officers, Canadian heads of mission, foreign heads of state visiting Canada).[1]

Aides-de-camp wear a gold pattern aiguillette when acting in their official capacity and may also wear the cypher or badge of the principal to whom they are appointed.[3] Honorary appointees to the Queen (royal cypher), to the Duke of Edinburgh, or the Prince of Wales, wear the appropriate cypher on their uniform epaulet. Aides-de-camp to the governor general wear the governor general's badge (crest of the arms of Canada) and aides-de-camp to a lieutenant governor wear the lieutenant governor's badge (shield of the province surmounted by the crown).[4]

Aides-de-camp to the governor general are appointed from officers of the Canadian Forces. Aides-de-camp to lieutenant governors are appointed from officers of the Canadian Forces, Royal Canadian Mounted Police and, depending on the province, aides may also be appointed from other civilian uniformed organizations (e.g., municipal or provincial police and emergency services) and in certain cases, even civilians. Non-uniformed civilians do not wear the aiguillette, but all may wear their lieutenant governor's badge as a symbol of their appointment. On November 29, 1973, Governor General Roland Michener concluded his initiative to permit aides-de-camp to the Governor General and Lieutenant-Governors to use the post-nominal letters A de C[5] for the duration of their appointment.[6]

There are several categories of these senior aides de camp to the Queen. Most are serving military, naval and RAF officers, usually of colonel or brigadier rank or equivalent. There are also specific posts for very senior officers, such as First and Principal Naval Aide de Camp, Flag Aide de Camp, Aides de Camp General, and Air Aides de Camp. Analogous offices include the Lieutenant of the Admiralty, the Rear Admiral of the United Kingdom, and the Gold Stick and Silver Stick.

In India, officers of the rank of Major General and equivalent and above in the sister services who are in command of divisions or of peacetime commands like Area HQ have ADCs who usually belong to their general's parent regiment/battalion. There have been instances where the sons have served a tenure of ADC to their fathers. The service chiefs (Chief of the Army/Air/Navy Staff) usually have three ADCs and the President of India has five ADCs (three from the army and one each from the navy and the air force). There is also one honorary ADC from the Territorial Army (The army reserve). The Governor of the states has two ADCs, one each from the army and the state police service.

In Pakistan the President, Prime Minister, Chief Ministers and Governor have their own aide-de-camp. The ADC can be from any one of the three Armed Forces and typically are of the rank of Captain (Army), Lieutenant (Navy) or Flight Lieutenant (Air Force). Interestingly, the ADC to Justice Khan Habibullah Khan, while he was Chief Minister/Leader of the House of West Pakistan was his son, a senior bureaucrat Captain (r) Akhtar Munir Marwat and Captain (r) Gohar Ayub Khan was to his father, President General Ayub Khan. The Chairman Joint Chief of Staff Committee and all the three Services Chiefs' (Army, Navy and Air Force) are authorized to have an ADC.

Portrait of Alexander Lanskoy, Aide-de-camp to the Empress, 1782, Russia

In the 18th-Century, under Catherine the Great of Russia, favorites of the Empress were frequently appointed as her Aides-de-camp.

In Sri Lanka, the President have ADCs from the three armed services as well as Extra-ADCs. All general, flag and air officers have their own ADCs usually selected from their parent regiment or unit.

Within the United States Army, aides-de-camp are specifically appointed to general-grade officers (NATO Code OF-6 through OF-10), the Secretary of the Army, Secretary of Defense, Vice President, and President of the United States; rank and number determined by the grade. For those general officers with more than one aide, the senior-ranking aide is usually considered to be the senior aide and serves in the capacity of coordinating the other aides and the others of the general's personal staff such as the driver, orderlies, et al. For the majority officers, the maximum tour of duty for aides is generally two years. The following is a listing of the accepted number of aides allotted a general officer:

Lieutenant colonels and colonels commanding units (battalions and brigades, respectively) do not have aides, but it is generally accepted that the unit's adjutant – called the S-1 – also serves the commanding officer as an aide.

At the brigadier general level it is not uncommon to have a captain as aide-de-camp.[citation needed]

U.S. Army aides-de-camp wear a special device in place of the branch-of-service (i.e., infantry, artillery, quartermaster, et al.) insignia they would otherwise wear on the lapels of their service uniform. The rank of the official whom the aide serves is indicated on the device, as shown below. Although the Chief of Staff of the Army is a four-star general and the Chairman of the Joint Chiefs of Staff is a four-star general or admiral, their aides-de-camp wear devices specific to those offices, vice the normal four-star aide device. See below. An aide-de-camp wears a special aiguillette on the shoulder of his dress uniforms.