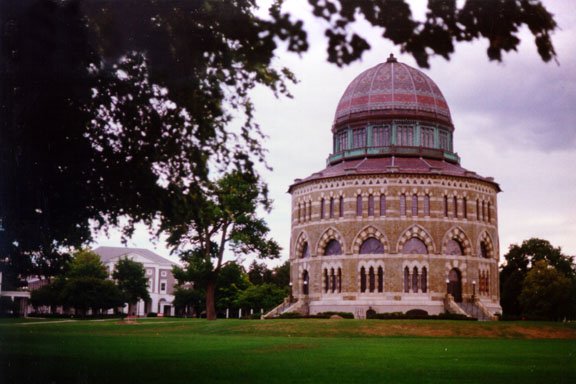 |thumb|250px|right
imagesize =
image_caption = 's Nott Memorial, one of the most recognized buildings in Schenectady 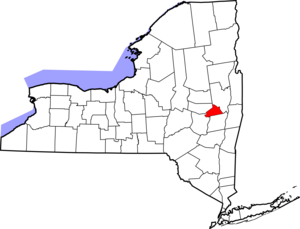 mapsize = 250x200px
map_caption = Located in Schenectady County in the State of

Schenectady (pronEng|skəˈnɛktədi; Θkahnéhtati [Rudes, B. "Tuscarora English Dictionary" Toronto: University of Toronto Press, 1999] in Tuscarora) is a in Schenectady County, , , of which it is the county seat. As of the 2000 census, the city had a population of 61,821. Schenectady is the ninth largest city in New York. The name "Schenectady" is derived from a Mohawk word for "on that side of the pinery," or "near the pines," or "place beyond the pine plains."

The city of Schenectady is in eastern New York State, near the confluence of the Mohawk and s. It is in the same metropolitan area as the state capital, Albany; Schenectady is about eighteen miles northwest of Albany.

The area that is now Schenectady was originally the land of the Mohawk tribe of the Nation. When Dutch settlers arrived in the Hudson Valley in the middle of the 17th century, the Mohawk called the settlement at "Schau-naugh-ta-da", meaning "over the pine plains." Eventually, this word entered the lexicon of the Dutch settlers, but the meaning was reversed, and the name referred to the bend in the Mohawk River where the city lies today.

Schenectady was first settled in 1661 when the area was part of the Dutch colony of . Settlement was led by of in the , who was granted letters patent to Schenectady in 1684.

On , , during the , led by and its Indian allies, resulted in the death of 60 of Schenectady's inhabitants. [ [http://freepages.genealogy.rootsweb.com/~vanepsgenealogy/schmass.html The Schenectady Massacre: Settlers Killed and Captured ] ] In 1748, during it was again attacked by the French and their Indian allies.

In 1765, Schenectady was incorporated as a borough. It was chartered as a city in 1798.

During the the local militia unit the was active during the and in fights against Loyalist troops.

In 1887, moved his Edison Machine Works to Schenectady. In 1892, Schenectady became the headquarters of the .

Schenectady is home to -AM, one of the first commercial radio stations in the United States. The station was named for its owner, General Electric (the G), and the city of Schenectady (the Y) Fact|date=December 2007. General Electric also generated the first regular television broadcasts in the United States in 1928, when experimental station W2XB began regular broadcasts on Thursday and Friday afternoons. This television station is now , for years the Capital District's affiliate, but more recently its affiliate.

The city was once known as "The City that Lights and Hauls the World" -- a reference to two prominent businesses in the city, the Edison Electric Company (now known as ), and the (ALCO). GE retains its administrative core in Schenectady, but many of manufacturing jobs relocated to the and abroad. ALCO's operations fizzled as the company went through acquisitions and restructuring in the late 1960s, and its Schenectady plant closed in 1969. In the late 20th century, the city experienced difficult financial times, as did many upstate New York cities. The loss of employment helped cause Schenectady's population to decline by nearly one-third since 1950. Nevertheless, Schenectady is part of a metropolitan area with better economic health.Fact|date=February 2007

It is generally considered to be part of the , the metropolitan area surrounding Albany, New York state's capital. Along with Albany and Troy, it is one of the three small, older industrial cities in the region.

* is an arts center. Built in 1926 as a vaudeville/movie theater, it has been refurbished. It is home to "Goldie," a Wurlitzer theater pipe organ. Proctor's was also the site of one of the first public demonstrations of , projecting an image from a studio at the GE plant a mile [2 km] away. Today, Proctors is home to 3 theaters including the historic Mainstage at Proctors, the GE Theatre at Proctors and 440 Upstairs at Proctors.
*The [http://www.historicstockade.com/ Stockade Historic District] , which features dozens of Dutch and English Colonial houses from the 18th and 19th centuries, is New York's first National Register historic district, designated in 1965. It is named after the stockade fence that originally surrounded the settlement.
*The [http://www.realtyplot.org/ GE Realty Plot] , located near Union College, was built by General Electric Company executives and features lovely 18th and early 19th century homes. The historic neighborhood is unique for its eclectic collection of grand homes in a variety of architectural styles, including Tudor, Dutch Colonial, Queen Anne, and Spanish Colonial. The Plot is home to the first all electric home in the United States, and is one of the first planned residential neighborhoods in the US. The Plot also hosts an annual House and Garden Tour.
*, adjacent to the GE Realty Plot, is the oldest planned college campus in the United States. The Union campus features Jackson's Garden, with eight acres (32,000 m²) of formal gardens and woodlands, and the unique 16-sided building, built in 1875.
*Central Park is the crown jewel of Schenectady's parks. Central Park is the highest elevation point in the city. The Common Council voted in 1913 to purchase the land for the present site of the park. The park features an acclaimed rose garden, Iroquois Lake, and a stadium tennis court that is home to the of the league.
*The features exhibits on the development of and . It contains the Suits-Bueche Planetarium.
*Schenectady's City Hall is the focal point of government in the city. It was designed by and built in 1933.
*Located in Schenectady is its [http://www.golfschenectady.com/ Municipal Golf Course] . It's an 18-hole championship facility sited among oaks and pines.
*:The course was designed in 1935 by Jim Thompson under the (WPA) program. The Schenectady Municipal Golf Course stretches to 6,600 yards (6000 m) and features fast, undulating greens and tight fairways with grasses and native vegetation. The course was ranked by Golf Digest as a "Best Places to Play in 2004" and received a three-star rating.
*Jay Street, located between Proctors and City Hall, is a short street closed to motor traffic. It features a number of small, independently operated businesses and eateries and is a popular destination.
* is a small community theater on group on State Street in downtown Schenectady.
*The , in nearby Glenville, features extensive exhibits and materials on aviation.
*The , exhibits and promotes the physical development of engineering of technology that was developed or produced in Schenectady.

*Schenectady is referenced, or is the setting for many of Kurt Vonnegut's books. Most notably Hocus Pocus and Player Piano.
*Schenectady's plant has the 12345.
*Schenectady is the former home of the . In 2005 the Hall moved to Amsterdam, New York.
*The world's first commercial TV station, still broadcasts each day from its Balltown Road studios in Niskayuna, just outside the city line, but still in Schenectady County. WRGB also did the first color television broadcast, which gave the station its name ("RGB" stands for red, green, and blue).
*The official song of Schenectady, entitled "Our Schenectady," was composed by John Van Laak and was sung by Judi Merriam. It was adopted by the Schenectady City Council on , . Immediate protests and disagreements arose from the population for the contrived lyrics and style of the song as well as the heavy handed way the city council adopted it without input. Lyrics are:

:"In Schenectady":"Our Schenectady":"What a warm and friendly place it is to be":"Nestled among plains and hills":"With a beautiful river that always gives us thrills":"And stores and shops with all that one might need or wish to see":"And legends and tales and lots of history"

:"If we will all do our best":"Then others can do the rest":"For places to study and learn in":"Places to work and earn in":"Places to live in happiness"Source: "Daily Gazette" , p. B1
*The notable sleep-talker had a dream (the audio recorded by his roommate) in which he was a member of a fanclub purchasing sixteen train tickets to Schenectady.