Schenectady County is a county located in the U.S. state of New York. As of the 2010 census, the population was 154,727. It is part of the Albany-Schenectady-Troy Metropolitan Statistical Area. The county seat is Schenectady. The name is from a Mohawk Indian word meaning "on the other side of the pine lands" and is pronounced /skəˈnɛktədi/. 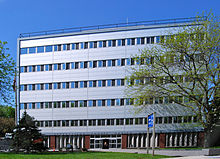 Schenectady County was formed in 1809. When counties were established in New York in 1683, the present Schenectady County was included in Albany County. Albany County was an enormous county, including the northern part of New York State as well as all of the present State of Vermont and, in theory, extending westward to the Pacific Ocean. This county was reduced in size on July 3, 1766, by the creation of Cumberland County, and further on March 16, 1770, by the creation of Gloucester County, both containing territory now in Vermont.

On March 12, 1772, Albany County was divided into the counties of Albany, Tryon (now Montgomery), and Charlotte (now Washington).

In 1809, Schenectady County was split from Albany County.

Schenectady County typically leans Democratic, it has given small to moderate leads to Democrats since 1988 in presidential elections. The congressman Paul Tonko is a Democrat. Legislative authority is vested in the County Legislature, which consists of 15 members representing 8 different communities, separated into four districts. The current composition of the Legislature is as follows (12 Democrats, 2 Republicans and 1 Conservative who caucuses with the Democrats):

The county operates the Schenectady County Public Library that consists of a central library and nine branches.