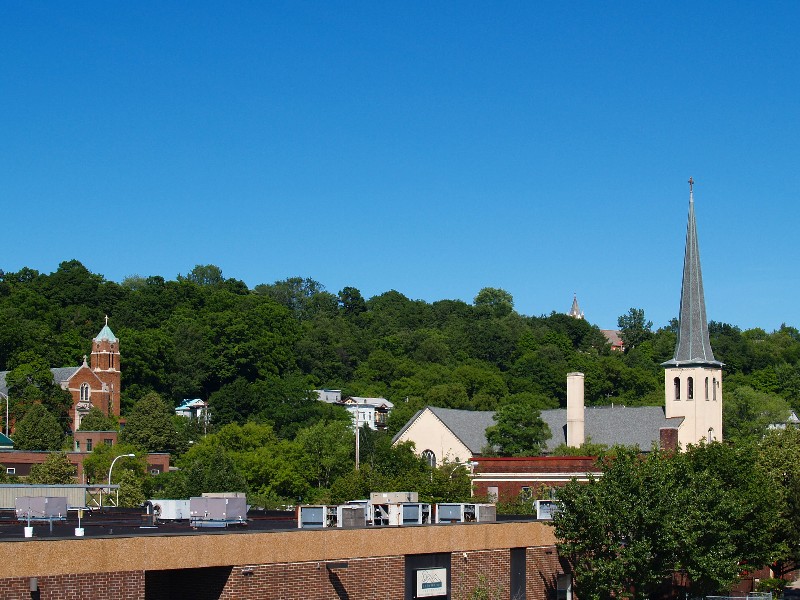 The City of Amsterdam is surrounded on the north, east, and west sides by the Town of Amsterdam and is on the banks of the . The majority of the city lies on the north bank, but the Port Jackson area on the south side is also part of the city, making it the only city in New York divided by the Mohawk.

The city is within the original "Town of Caughnawaga" (now defunct), formed in northern Montgomery County in 1788.

The community was previously called "Veeders Mills" and "Veedersburgh," after an early mill owner, but was changed to "Amsterdam" in 1803.

The city was incorporated as a village in 1830 from a section of the Town of Amsterdam. New charters in 1854, 1865, and 1875 increased the size of the village. In 1885, Amsterdam became a city, which was subsequently increased in size again by annexation of the former "Village of Port Jackson," which became the fifth ward of the city.

The completion of the in 1825 was an economic boon to the city.

A dam on the Chuctenunda River, finished in 1875, allowed the city to become an important manufacturing area, primarily of carpets.

The , along with the Erie Canal, passes through the south part of the city. The Chuctenunda River flows into the Mohawk at Amsterdam.

, a north-south highway called Market Street in part, crosses the Mohawk River to link the main part of Amsterdam to the . NY-30 also intersects east west highways and in the city. passes along the south side of the Mohawk River.

Property taxes in this city and the surrounding county (Montgomery county)are some of the highest in the country compared to property values and income. Fact|date=February 2007

In the nineteenth century, the city of Amsterdam was known for , , and . It continued to be a center for carpet-making in the 20th century, when the Bigelow-Sanford and Mohawk Mills Carpet companies both were located in Amsterdam, but these companies have relocated to other regions. In the early 1980s, it was also the home of , makers of the , and the . Current industries include the , [ [http://longfibre.com/mills/facilities/amsterdam.php Amsterdam, NY - Longview Fibre ] ] the Fownes Glove Co. and Fiber Glass Industries (FGI). [ [http://fiberglassindustries.com/ Fiber Glass Industries, Inc ] ]

The enclosed shopping center formerly known as the is currently is called the .

Amsterdams's former Armory, which is listed on the , is now a bed and breakfast inn called . It has been used as a location in several ABC, , and movie productions. [ [http://amsterdamcastle.com/] ]

Notable natives or residents of Amsterdam include:
*, FBI agent assigned to the under Presidents George H.W. Bush and Clinton; author of a controversial book about the Clinton administration.
*, recipient, soldier
*Benedict Arnold (1780-1849), United States Congressman from New York