Political Science is a social science discipline concerned with the study of the state, government and politics. Aristotle defined it as the study of the state.[1] It deals extensively with the theory and practice of politics, and the analysis of political systems and political behavior. Political scientists "see themselves engaged in revealing the relationships underlying political events and conditions. And from these revelations they attempt to construct general principles about the way the world of politics works."[2] Political science intersects with other fields; including anthropology, public policy, national politics, economics, international relations, comparative politics, psychology, sociology, history, law, and political theory. Although it was codified in the 19th century, when all the social sciences were established, political science has ancient roots; indeed, it originated almost 2,500 years ago with the works of Plato and Aristotle.[3]

Political science is commonly divided into three distinct sub-disciplines which together constitute the field: political philosophy, comparative politics and international relations. Political philosophy is the reasoning for an absolute normative government, laws and similar questions and their distinctive characteristics. Comparative politics is the science of comparison and teaching of different types of constitutions, political actors, legislature and associated fields, all of them from an intrastate perspective. International relations deals with the interaction between nation-states as well as intergovernmental and transnational organizations.

"As a discipline" political science, possibly like the social sciences as a whole, "lives on the fault line between the 'two cultures' in the academy, the sciences and the humanities."[4] Thus, in some American colleges where there is no separate School or College of Arts and Sciences per se, political science may be a separate department housed as part of a division or school of Humanities or Liberal Arts.[5] Whereas classical political philosophy is primarily defined by a concern for Hellenic and Enlightenment thought, political scientists are also marked by a great concern for "modernity" and the contemporary nation state, along with the study of classical thought, and as such share a greater deal of terminology with sociologists (e.g. structure and agency).

Political scientists study matters concerning the allocation and transfer of power in decision making, the roles and systems of governance including governments and international organizations, political behavior and public policies. They measure the success of governance and specific policies by examining many factors, including stability, justice, material wealth, and peace. Some political scientists seek to advance positive (attempt to describe how things are, as opposed to how they should be) theses by analyzing politics. Others advance normative theses, by making specific policy recommendations.

The national honour society for college and university students of government and politics in the United States is Pi Sigma Alpha. 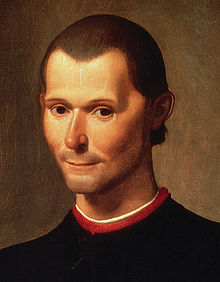 Niccolò Machiavelli, one of many influential political theorists

Political science as a separate field is a relatively late arrival in terms of social sciences. However, the term "political science" was not always distinguished from political philosophy, and the modern discipline has a clear set of antecedents including also moral philosophy, political economy, political theology, history, and other fields concerned with normative determinations of what ought to be and with deducing the characteristics and functions of the ideal state.

The antecedents of Western politics can be traced back to the Socratic political philosophers, Plato (427–347 BC), Xenophon (c. 430–354 BC), and Aristotle ("The Father of Political Science") (384–322 BC). These authors, in such works as The Republic and Laws by Plato, and The Politics and Nicomachean Ethics by Aristotle, analyzed political systems philosophically, going beyond earlier Greek poetic and historical reflections which can be found in the works of epic poets like Homer and Hesiod, historians like Herodotus and Thucydides, and dramatists such as Sophocles, Aristophanes, and Euripides.

The rise and fall of the Roman Empire

During the height of the Roman Empire, famous historians such as Polybius, Livy and Plutarch documented the rise of the Roman Republic, and the organization and histories of other nations, while statesmen like Julius Caesar, Cicero and others provided us with examples of the politics of the republic and Rome's empire and wars. The study of politics during this age was oriented toward understanding history, understanding methods of governing, and describing the operation of governments. Nearly a thousand years elapsed, from the foundation of the city of Rome in 753 BC to the fall of the Roman Empire or the beginning of the Middle Ages. In the interim, there is a manifest translation of Hellenic culture into the Roman sphere. The Greek gods become Romans and Greek philosophy in one way or another turns into Roman law e.g. Stoicism. The Stoic was committed to preserving proper hierarchical roles and duties in the state so that the state as a whole would remain stable. Among the best known Roman Stoics were philosopher Seneca and the emperor Marcus Aurelius. Seneca, a wealthy Roman patrician, is often criticized by some modern commentators for failing to adequately live by his own precepts. The Meditations of Marcus Aurelius, on the other hand, can be best thought of as the philosophical reflections of an emperor divided between his philosophical aspirations and the duty he felt to defend the Roman Empire from its external enemies through his various military campaigns. According to Polybius, Roman institutions were the backbone of the empire but Roman law is the medulla.[8]

With the fall of the Western Roman Empire, there arose a more diffuse arena for political studies. The rise of monotheism and, particularly for the Western tradition, Christianity, brought to light a new space for politics and political action. Works such as Augustine of Hippo's The City of God synthesized current philosophies and political traditions with those of Christianity, redefining the borders between what was religious and what was political. During the Middle Ages, the study of politics was widespread in the churches and courts. Most of the political questions surrounding the relationship between church and state were clarified and contested in this period. The Arabs lost sight of Aristotle's political science but continued to study Plato's Republic which became the basic text of Judeo-Islamic political philosophy as in the works of Alfarabi and Averroes; this did not happen in the Christian world, where Aristotle's Politics was translated in the 13th century and became the basic text as in the works of Saint Thomas Aquinas.[9]

In ancient India, the antecedents of politics can be traced back to the Rig-Veda, Samhitas, Brahmanas, the Mahabharata and Buddhist Pali Canon. Chanakya (c. 350–275 BC) was a political thinker in Takshashila. Chanakya wrote the Arthashastra, a treatise on political thought, economics and social order. It discusses monetary and fiscal policies, welfare, international relations, and war strategies in detail, among other topics. The Manusmriti, dated to about two centuries after the time of Chanakya is another important Indian political treatise.

Ancient China was home to several competing schools of political thought, most of which arose in the Spring and Autumn Period. These included Mohism (a utilitarian philosophy), Taoism, Legalism (a school of thought based on the supremacy of the state), and Confucianism. Eventually, a modified form of Confucianism (heavily infused with elements of Legalism) became the dominant political philosophy in China during the Imperial Period. This form of Confucianism also deeply influenced and were expounded upon by scholars in Korea and Japan.

In Persia, works such as the Rubaiyat of Omar Khayyam and Epic of Kings by Ferdowsi provided evidence of political analysis, while the Middle Eastern Aristotelians such as Avicenna and later Maimonides and Averroes, continued Aristotle's tradition of analysis and empiricism, writing commentaries on Aristotle's works. Averroe did not have at hand a text of Aristotle's Politics, so he wrote a commentary on Plato's Republic instead.

During the Italian Renaissance, Niccolò Machiavelli established the emphasis of modern political science on direct empirical observation of political institutions and actors. Machiavelli was also a realist, arguing that even evil means should be considered if they help to create and preserve a glorious regime. Machiavelli therefore also argues against the use of idealistic models in politics, and has been described as the father of the "politics model" of political science.[10] Later, the expansion of the scientific paradigm during the Enlightenment further pushed the study of politics beyond normative determinations.

Like Machiavelli, Thomas Hobbes, well known for his theory of the social contract, believed that a strong central power, such as a monarchy, was necessary to rule the innate selfishness of the individual but neither of them believed in the divine right of kings. John Locke, on the other hand, who gave us Two Treatises of Government and who did not believe in the divine right of kings either, sided with Aquinas and stood against both Machiavelli and Hobbes by accepting Aristotle's dictum that man seeks to be happy in a state of social harmony as a social animal. Unlike Aquinas' preponderant view on the salvation of the soul from original sin, Locke believed man comes into this world with a mind that is basically a tabula rasa. According to Locke, an absolute ruler as proposed by Hobbes is unnecessary, for natural law is based on reason and equality, seeking peace and survival for man.

Religion would no longer play a dominant role in politics. There would be separation of church and state. Principles similar to those that dominated the material sciences could be applied to society as a whole, originating the social sciences. Politics could be studied in a laboratory as it were, the social milieu. In 1787, Alexander Hamilton wrote: "...The science of politics like most other sciences has received great improvement." (The Federalist Papers Number 9 and 51). Both the marquis d'Argenson and the abbé de Saint-Pierre described politics as a science; d'Argenson was a philosopher and de Saint-Pierre an allied reformer of the enlightenment.[11]

Other important figures in American politics who participated in the Enlightenment were Benjamin Franklin and Thomas Jefferson.

Because political science is essentially a study of human behavior, in all aspects of politics, observations in controlled environments are often challenging to reproduce or duplicate, though experimental methods are increasingly common.[12] Citing this difficulty, former American Political Science Association President Lawrence Lowell once said "We are limited by the impossibility of experiment. Politics is an observational, not an experimental science."[13] Because of this, political scientists have historically observed political elites, institutions, and individual or group behavior in order to identify patterns, draw generalizations, and build theories of politics.

In the 1950s and the 1960s, a behavioral revolution stressing the systematic and rigorously scientific study of individual and group behavior swept the discipline. A focus on studying political behavior, rather than institutions or interpretation of legal texts, characterized early behavioral political science, including work by Robert Dahl, Philip Converse, and in the collaboration between sociologist Paul Lazarsfeld and public opinion scholar Bernard Berelson.

The late 1960s and early 1970s witnessed a take off in the use of deductive, game theoretic formal modeling techniques aimed at generating a more analytical corpus of knowledge in the discipline. This period saw a surge of research that borrowed theory and methods from economics to study political institutions, such as the United States Congress, as well as political behavior, such as voting. William H. Riker and his colleagues and students at the University of Rochester were the main proponents of this shift. Criticisms of the use of this rational choice theorizing has been widespread, even among political scientists who adopt quantitative methods.Cite error: Closing </ref> missing for <ref> tag; see the help page

Most political scientists work broadly in one or more of the following four areas: