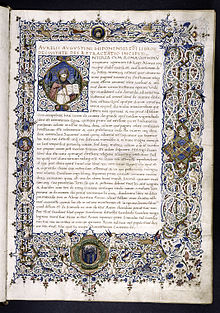 De Civitate Dei, (full title: De Civitate Dei contra Paganos), known in English as: [Concerning the] The City of God [against the Pagans] is a book written in Latin by Augustine of Hippo in the early 5th century AD, dealing with issues concerning God, martyrdom, Jews, and other aspects of Christian philosophy. The City of God is one of Augustine's major works, a designation that includes The Confessions, On Christian Doctrine, and On the Trinity. Augustine is the most influential Father of the Church in the West and through Western Christianity The City of God profoundly shaped Western civilization.

Augustine wrote the treatise to explain Christianity's relationship with competing religions and philosophies, and to the Roman government with which it was increasingly intertwined. It was written soon after Rome was sacked by the Visigoths in 410. This event left Romans in a deep state of shock, and many saw it as punishment for abandoning traditional Roman religion for Catholic Christianity. It was in this atmosphere that Augustine set out to console Christians, writing that, even if the earthly rule of the Empire was imperiled, it was the City of God that would ultimately triumph — Augustine's eyes were fixed on Heaven, a theme of many Christian works of Late Antiquity.

Despite Christianity's designation as the official religion of the Empire, Augustine declared its message to be spiritual rather than political. Christianity, he argued, should be concerned with the mystical, heavenly city, the New Jerusalem — rather than with earthly politics.

The book presents human history as being a conflict between what Augustine calls the City of Man and the City of God (a conflict that is destined to end in victory of the latter). The City of God is marked by people who forgot earthly pleasure to dedicate themselves to the eternal truths of God, now revealed fully in the Christian faith. The City of Man, on the other hand, consists of people who have immersed themselves in the cares and pleasures of the present, passing world.

Augustine provides a brief description of the contents of the work:

However, this great undertaking was at last completed in twenty-two books. Of these, the first five refute those who fancy that the polytheistic worship is necessary in order to secure worldly prosperity, and that all these overwhelming calamities have befallen us in consequence of its prohibition. In the following five books I address myself to those who admit that such calamities have at all times attended, and will at all times attend, the human race, and that they constantly recur in forms more or less disastrous, varying only in the scenes, occasions, and persons on whom they light, but, while admitting this, maintain that the worship of the gods is advantageous for the life to come. But that no one might have occasion to say, that though I had refuted the tenets of other men, I had omitted to establish my own, I devote to this object the second part of this work, which comprises twelve books, although I have not scrupled, as occasion offered, either to advance my own opinions in the first ten books, or to demolish the arguments of my opponents in the last twelve. Of these twelve books, the first four contain an account of the origin of these two cities—the city of God, and the city of the world. The second four treat of their history or progress; the third and last four, of their deserved destinies.
—Augustine, Retractions[1]

In other words, the City of God can be largely divided into two parts. Part I, which comprises Books I-X, is largely polemical in style and is devoted primarily to a critique of Roman cultures and mores (Books I-V) and of pagan philosophy (Books VI-X). Interpreters often take these first ten books to correspond with the Earthly City, in contradistinction to the City of God discussed in Part II, which comprises the remaining twelve books. Part II is where Augustine shifts gears from criticism to positing a coherent account of the relationship between the City of God and an Earthly City properly subordinated to it.

As indicated in the above passage from the Retractions, the City of God can be further subdivided into the following parts:

a) Books I-V: criticism of Rome

c) Books XI-XIV: the origins of the two cities

Texts about The City of God