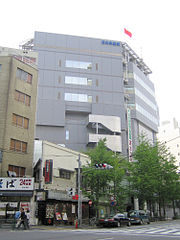 The JCP advocates the establishment of a society based on socialism, democracy and peace, and opposition to militarism. It proposes to achieve these objectives by working within the framework of capitalism in order to achieve its goals,[1] while still struggling against what it describes as "imperialism and its subordinate ally, monopoly capital." Although it is a Marxist party, the JCP does not advocate socialist revolution; it proposes a "democratic revolution" to achieve "democratic change in politics and the economy", and "the complete restoration of Japan's national sovereignty", which it sees as infringed by Japan's security alliance with the United States although it firmly defends Article 9 of the Constitution of Japan.

The JCP is one of the largest non-ruling communist parties in the world, with about 400,000 members belonging to 25,000 branches. In the wake of the Sino-Soviet split the party began to distance itself from the Socialist Bloc, especially from the Soviet Union. After the collapse of the Soviet Union, the JCP released a press statement titled, "We welcome the end of a great historical evil of imperialism and hegemonism" ("大国主義・覇権主義の歴史的巨悪の党の終焉を歓迎する"), while at the same time criticizing Eastern European countries for abandoning socialism, describing it as a "reversal of history".

Consequently, the party has not suffered an internal crisis as a result of the collapse of the Soviet Union, nor has it considered disbanding or changing its name or fundamental objectives, as many other Communist parties have done. It polled 11.3% of the vote in 2000, 8.2% in 2003, 7.3% in 2005, and 7.0% in the August 2009 election. While this represents a slow decline, the JCP still polled nearly 5 million votes, after Russia the second largest showing for any Communist Party in the Group of Eight nations. At the July 2007 elections for the House of Councillors it received 7.5%.

The JCP was founded on July 15, 1922, as an underground political association. Outlawed at once under the Peace Preservation Law, the JCP was subjected to repression and persecution by the military and police of Imperial Japan. It was the only political party in Japan that opposed Japan's involvement in World War II. The party was legalised during the U.S. occupation of Japan in 1945, and since then has been a legal political party able to contest elections. In 1949 the party made unprecedented gains. It won 10 percent of the vote and sent 35 representatives to the Diet. But early in 1950, the Soviet Union sharply criticized the JCP's parliamentary strategy. Stalin insisted that the JCP pursue more militant, even violent, actions. SCAP seized this occasion to engineer the Red Purge, which forced the party leaders underground. Then, after the Korean War broke out, the party staged some acts of terrorism or sabotage. This resulted in a loss of popular confidence. Through the end of the decade it never won more than 3 percent of the votes or two seats in the Diet. Even so, its strong support among many intellectuals gave it a relatively greater importance than these numbers suggest.

The party did not take sides during the Sino-Soviet split of the 1960s. In the mid 1960s the U.S. State Department estimated the party membership to be approximately 120,000 (0.2% of the working age population).[2]

The JCP has maintained its position partly because of the collapse of the old Japan Socialist Party, once the country's main opposition party but by 2005 reduced to 5.5% of the vote. The JCP has also been helped by recent reforms to the Japanese electoral system. It is unable to win any single-member constituencies, but retains its representation by winning some of the proportional representation seats.

Lam Peng Er argued in Pacific Affairs in 1996 that "the JCP's viability is crucial to the health of Japanese democracy." This, he says, is because: "It is the only established party in parliament that has not been coopted by the conservative parties. It performs the watchdog role against the ruling parties without fear or favor. More importantly, the JCP often offers the only opposition candidate in prefectural governorship, city mayoral and other local elections. Despite the ostensible differences between the non-Communist parties at the national level, they often support a joint candidate for governor or mayor so that all parties are assured of being part of the ruling coalition. If the JCP did not offer a candidate, there would be a walkover and Japanese voters would be offered a fait accompli without an electoral avenue of protest. Promoting women candidates in elections to win women's votes is another characteristic of the party. More women are elected under the Communist label than other political parties in Japan."

Since mid 2008, the party has experienced an increase in support due to the effect of the global financial crisis on Japanese workers. [3][4] However they failed to increase seats in the Japanese general election, 2009.

One of the JCP's main objectives is terminating the Japan–U.S. military alliance and the dismantling of all U.S. military bases in Japan. It wants to make Japan a non-aligned and neutral country, in accordance with its principles of self-determination and national sovereignty. (In Japan there are about 130 U.S. military bases and other related facilities, Okinawa having the largest U.S. military base in Asia).

With regards to Japan's own military forces, the JCP's current policy is that it is not principally opposed to its existence (in 2000 it decided that it will agree to its use should Japan ever get attacked), but that it will seek to abolish it in the long term, international situation permitting.

The JCP also opposes possession of nuclear weapons by any country or the concept of military blocs, and opposes any attempt to revise Article 9 of the Constitution of Japan, which says that "never again …... [Japan] be visited with the horrors of war through the action of government". Regarding the resolution of disputes, it argues that priority must be given to peaceful means through negotiations, not to military solutions. The JCP says that Japan must adhere to the U.N. Charter.

The JCP adheres to the idea that Japan as an Asian country must stop putting emphasis on diplomacy centering on relations with the United States and the G8 Summit, and put Asian diplomacy at the center of its foreign relations. It supports Japan establishing an "independent foreign policy in the interests of the Japanese people," and rejects "uncritically following any foreign power".

The JCP advocates that Japan issue further apologies for its actions during World War II. In the 1930s, while the JCP was still illegal, it was the only political party to actively oppose Japan's war with China and World War II.

The JCP has traditionally been opposed to the existence of the Imperial House since the pre-war days. Today, it acknowledges the Emperor as Japan's head of state as long as he remains a figurehead. JCP has stated that if the party comes to power, it will not ask the Emperor to abdicate; it is also against Japan's use of its national flag and national anthem which it sees as a relic of Japan's militarist past.