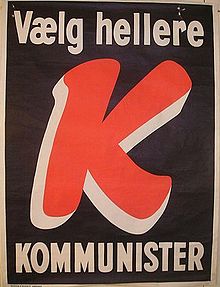 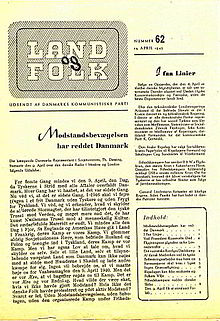 Communist Party of Denmark (Danish: Danmarks Kommunistiske Parti or simply DKP) is a communist political party in Denmark which was founded as Venstresocialistiske Parti (Left Socialist Party) in 1919. VSP was a split from the Danish Social Democratic Party. The party assumed its present name in 1920. In 2010 DKP is represented in the Danish parliament through the Unity List or Red-Green Alliance.

The party's chairmen were:

After 1991 the party had collective leadership until 2003 when Henrik Stamer Hedin assumed chairmanship.

In 1941, during the German occupation of Denmark in World War II, DKP was banned and its members arrested. After this DKP played a leading role in organizing the resistance through KOPA, later renamed BOPA. At the beginning of the war the party head quarter was located in Griffenfeldsgade in Nørrebro, the party cafe remains in the street today. From 1945 to 1990 DKP had a daily publication, Land og Folk. Until 1990, DKP had a youth wing, Danmarks Kommunistiske Ungdom.

In the mid 1960s the U.S. State Department estimated the party membership to be approximately 5000.[1]

In 1989 DKP founded, together with Venstresocialisterne and Socialistisk Arbejderparti, Red-Green Alliance, also known as the Unity List (Danish: Enhedslisten). The Unity List won parliamentary representation in 1994.