Charlottenburg is a locality of Berlin within the borough of Charlottenburg-Wilmersdorf, named after Queen consort Sophia Charlotte (1668–1705). It is best known for Charlottenburg Palace, the largest surviving royal palace in Berlin, and the adjacent museums.

Charlottenburg celebrated its 300th anniversary in 2005.

On the land occupied by Charlottenburg there were three settlements in the late Middle Ages: the farmsteads Lietzow (pronounced leat-tsow) and Casow (pr. caasow) and a further settlement called Glienicke (pr. gleanicke). Although these names are of Slavic origin, the settlements are likely to have had a mixed Slavic and German population.

Lietzow (also called Lietze, Lutze, Lutzen, Lütze, Lützow, Lusze and Lucene) is first documented in 1239, and was in the area of the present day Alt-Lietzow Street behind the town hall. Casow laid opposite of Lietzow, on the other side of the Spree river. In 1315, Lietzow and Casow became the property of the Sankt Marien nunnery in Spandau. As a result, the Lietzow farmstead probably was expanded to a village. In the course of the Protestant Reformation, Joachim II Hector, Elector of Brandenburg, confiscated the estates and dissolved the nunnery in 1558.

While Lietzow has been populated continuously, Casow and Glienicke were abandoned. From old field names it is believed that Glienicke lay in the area of the present day streets Kantstraße, Fasanenstraße, Kurfürstendamm and Uhlandstraße at the former Gliniker Lake (now dry, there's another Glienicke Lake in the Wannsee locality).

The development of Lietzow is well documented. For more than four hundred years, members of the Berendt family were mayors and thus had to pay lower taxes. Ecclesiastically, Lietzow came under the pastor of Wilmersdorf, who reached it from there by the so-called 'Priesterweg' (priest's way), on the line of the streets now called Leibnizstraße, Konstanzer Straße and Brandenburgische Straße. 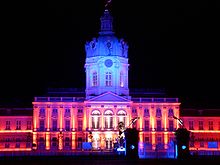 In 1695, Sophia Charlotte of Hanover received Lietzow from her husband, Elector Frederick III, in exchange for her estates in Caputh and Langerwisch, near Potsdam. Frederick had a summer residence built there for Sophie Charlotte by the architect Johann Arnold Nering between 1695 and 1699. After Frederick became Frederick I, King in Prussia, the palace was extended into a stately building with a cours d'honneur. This work was supervised by the Swedish master builder Johann Friedrich Eosander. Shortly after the death of Sophie Charlotte, the settlement facing the palace was called Charlottenburg - the palace itself Schloss Charlottenburg - and chartered as a town on April 5, 1705. The king was the town's mayor until the historic village of Lietzow was incorporated into Charlottenburg in 1720.

Frederick's successor as king, Frederick William I of Prussia, rarely stayed at the palace, which depressed the small town of Charlottenburg. Frederick William even tried to revoke the town's privileges. It was not until 1740, at the coronation of his successor Frederick II, that the town's significance increased, as regular celebrations were held again at the palace. The eastern New Wing was built by Georg Wenzeslaus von Knobelsdorff between 1740 and 1747 as Frederick the Great's residence. Later, Frederick II preferred the palace of Sanssouci, which he had partly designed himself.

In the late 18th century, Charlottenburg's development did not depend only on the crown. The town became a recreational area for the expanding city of Berlin. Its first true inn opened in the 1770s, in the street then called Berliner Straße (now Otto-Suhr-Allee), and many other inns and beer gardens were to follow, popular for weekend parties especially. Berliners seeking leisure and entertainment came by boat, by carriage and later by horse-drawn trams, above all to a large amusement park at the shore of the Spree river called Flora, that went into bankruptcy in 1904.

From the 1860s on the wealthy Bourgeoisie of Berlin discovered Charlottenburg as a residential area, among the first were Gerson von Bleichröder and Ernst Werner von Siemens, who had a villa built in the Berliner Straße in 1862. At the same time industrial companies like Siemens & Halske and Schering erected large factories in the north-east, at the border with the Moabit district of Berlin. In 1877 Charlottenburg received town privileges and until World War I saw an enormous increase of population with 100,000 inhabitants as of 1893 and a population of 306,000 in 1920, being the second largest city within the Province of Brandenburg, after Berlin.

The development was accompanied by an urban planning of broad streets and sidewalks, parks and spacious residential buildings, especially around the southern Kurfürstendamm area, which enabled large parts of Charlottenburg to preserve their affluent residential character. "The richest town of Prussia" established a Royal Technical College in 1879 (which later became the Berlin Institute of Technology), followed by the Physikalisch-Technische Reichsanstalt and the College of the Fine Arts. A new town hall with a 88 m (289 ft) tall spire was erected on the occasion of its 200-year jubilee in 1905 and an opera house opened in 1912. The history of Charlottenburg as a municipality in its own right ended with the Greater Berlin Act of October 1, 1920, when the town became a part of Berlin. The Province of Brandenburg was administered in Charlottenburg from 1918 until the province's dissolution in 1946 after World War II.

In the 1920s the area around the Kurfürstendamm evolved into the "New West" of Berlin, a development that had already started around 1900 with the opening of the Theater des Westens, the Café des Westens and the Kaufhaus des Westens, followed by several theatres, cinemas, bars and restaurants, which made Charlottenburg the Berlin centre of leisure and nightlife. Artists like Alfred Döblin, Otto Dix, Gottfried Benn, Else Lasker-Schüler, Bertolt Brecht, Max Liebermann, Stefan Zweig and Friedrich Hollaender socialized in the legendary Romanisches Café at the Kaiser Wilhelm Memorial Church. However the days of the Golden Twenties came to an end with the rise of the Nazi Party. In World War II the area around the Breitscheidplatz was heavily damaged by air raids and the Battle of Berlin.[citation needed]

Nevertheless after 1945 the Kurfürstendamm area quickly regained its importance, as with the partition of the city in the Cold War it became the commercial centre of West-Berlin. It was therefore the site of protests and major demonstrations of the late 1960s German student movement, that culminated on June 2, 1967 when student Benno Ohnesorg was shot by a police officer during a demonstration against Mohammad Reza Shah Pahlavi at the Deutsche Oper.[citation needed] 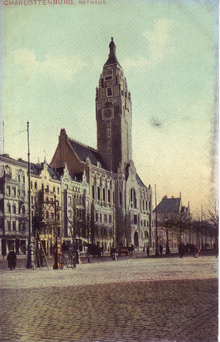 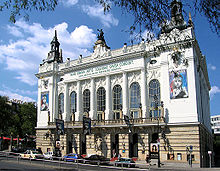 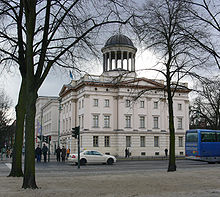 Beside the palace, Charlottenburg is also home to: