Boroughs and localities of Berlin

Boroughs and localities of Berlin 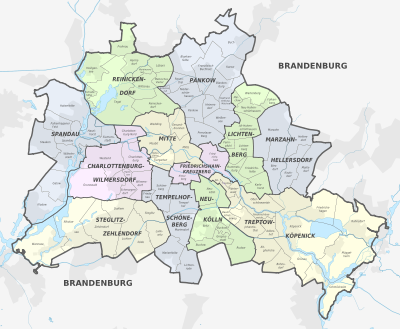 The boroughs and localities of Berlin 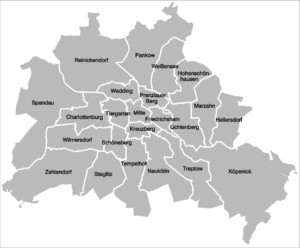 Berlin is both a city and one of Germany’s federal states. It is made up of twelve boroughs (Bezirke in German, also known as districts or administrative districts in English), each with its own borough government, though all boroughs are subject to Berlin’s city and state government.

Each borough is made up of several officially recognized localities (Ortsteile in German, sometimes called subdistricts in English). These localities typically have a historical identity as former independent cities, villages, or rural municipalities that were united in 1920 as part of the Greater Berlin Act, forming the basis for the present-day city and state. The localities do not have their own governmental bodies, but are recognized by the city and the boroughs for planning and statistical purposes. Berliners often identify more with the locality where they live than with the borough that governs them. The localities are further subdivided into statistical tracts, which are mainly used for planning and statistical purposes. The statistical tracts correspond roughly but not exactly with neighbourhoods recognized by residents.

When Greater Berlin was established in 1920, the city was organized into 20 boroughs, most of which were named after their largest component locality, often a former city or municipality; others, such as Kreuzberg and Prenzlauer Berg, were named for geographic features. By 2000, Berlin comprised 23 boroughs, as three new boroughs had been created in East Berlin.

An administrative reform in 2001 merged the existing boroughs into the current 12 boroughs. As of 2005, these 12 boroughs were made up of a total of 95 officially recognized localities, as listed below.[1]

The mural crown of the coats of arms of Berliner Bezirke

All the coats of arms of Berliner boroughs (the current as the ones in the period 1990-2001) have some common points: The shield has a Spanish form and the coronet is represented by a mural crown: 3 towers in red bricks with the coat of arms of Berlin in the middle.

Most of the coats of arms of current boroughs [2] have changed some elements in their field: Some of them have created a "fusion" of themes of the merged Bezirke (Charlottenburg-Wilmersdorf, Lichtenberg, Steglitz-Zehlendorf, Tempelhof-Schöneberg); others have modified their themes taken from one of the two (or more) former merged boroughs (Friedrichshain-Kreuzberg, Marzahn-Hellersdorf, Mitte and Treptow-Köpenick). Only the unchanged boroughs of Neukölln, Reinickendorf and Spandau haven't changed their field. The coat of arms of Pankow was created with a new design in 2008, having been the only district without an emblem for 7 years.

Media related to Boroughs of Berlin at Wikimedia Commons

Media related to Localities of Berlin at Wikimedia Commons