Mitte
This article is about the district in Berlin. For other uses, see Mitte (disambiguation). 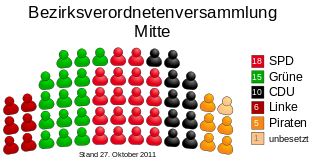 Mitte is the first and most central borough of Berlin. It was created in Berlin's 2001 administrative reform by the merger of the former districts of Mitte proper, Tiergarten and Wedding; the resulting borough retained the name Mitte. It is one of the two boroughs (beside Friedrichshain-Kreuzberg) which comprises former West and East Berlin districts. Mitte encompasses Berlin's historic core and includes some of the most important tourist sites of Berlin like Museum Island, Brandenburg Gate, Unter den Linden, Potsdamer Platz, the Reichstag and Berlin Hauptbahnhof, most of which were in former East Berlin.

Note that when Berliners speak of Mitte, they usually refer to the smaller locality and not to the larger borough.

Mitte (German for "middle", "centre") is located in the centre of Berlin along the Spree River. It borders on Charlottenburg-Wilmersdorf in the west, Reinickendorf in the north, Pankow in the east, Friedrichshain-Kreuzberg in the southeast, and Tempelhof-Schöneberg in the southwest.

In the middle of the Spree lies Museum Island (Museumsinsel) with its museums and Berlin Cathedral (Berliner Dom). The central square in Mitte is Alexanderplatz with the prominent Fernsehturm (TV tower), Germany's highest building, and the large railway station with connections to many subway (U-Bahn), tramway (Straßenbahn), city trains (S-Bahn) and buses. There are some important streets which connect Mitte with the other boroughs, e.g. the boulevard Unter den Linden which connects Alexanderplatz to the west with Brandenburg Gate and runs further as Straße des 17. Juni to the Victory Column and the centre of former West Berlin in Charlottenburg, or Karl-Marx-Allee from Alexanderplatz to Friedrichshain and the eastern suburbs.

The former Mitte district had been established by the 1920 Greater Berlin Act and comprised large parts of the historic city around Alt-Berlin and Cölln. Brandenburg Gate was the western exit at the Berlin city boundary until 1861.

Between 1961 and 1990, Mitte was the central part of East Berlin, however at the same time it was surrounded by the Berlin Wall at its north, south and west. There were some border control points, the most famous of which was Checkpoint Charlie between Kreuzberg and Mitte, which was operated by the United States Army and its allies and was open to foreigners and diplomats. Two other checkpoints were at Heinrich-Heine-Straße/Prinzenstraße east of Checkpoint Charlie, open to citizens of West Germany and West Berlin and on Invalidenstraße in the north on the border with the West Berlin Tiergarten district (the present-day Moabit locality).

The present-day borough of Mitte consists of six localities:

As of 2010, the district had a population of 322,919, of whom 144.000 (44.5%) had a migration background. In the former West Berlin areas of Wedding, Gesundbrunnen and Moabit, foreigners and Germans of foreign origin compose nearly 70% of the population, while in Mitte proper the share of migrants is relatively low. The immigrant community is quite diverse, however, Middle Easterners (e.g. Turks, Arabs etc.), Africans, Eastern Europeans and East Asians form the largest groups.[1]

View over Mitte from Berlin Cathedral