Frederick William I of Prussia

Frederick William I of Prussia 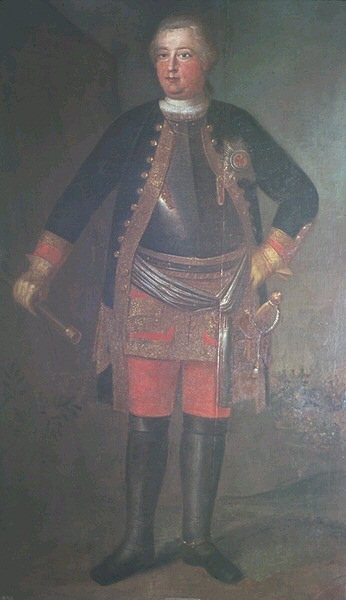 Frederick William I ( _de. Friedrich Wilhelm I) (, &ndash; , ) of the House of , was the and (as Frederick William II) from 1713 until his death. He is popularly known as "the Soldier-King" ("der Soldatenkönig").

The King acquired a reputation for his fondness for military display, leading to his special efforts to hire the tallest men he could find in all of for a special regiment nicknamed the .

He was born in to and . His father had successfully acquired the title King for the s of .

Frederick William's contributions to the state of Prussia primarily consisted of civil service reforms, developing the international reputation of the Prussian military, and increasing the overall efficiency and discipline of his military, which in turn placed Prussia as an entity on a par with , the , and other politically dominant states in during the 18th century.

During his reign, Frederick William I did much to centralize and improve Prussia. He replaced mandatory military service among the middle class with an annual tax, established primary schools, and resettled (which had been devastated by the plague in 1709). [ [http://www.exulanten.com/preussen.html Ostpreußen: The Great Trek] ]

Frederick William was an extremely able administrator. He opposed all superfluous spending, so long as it did not concern his army. Frederick William paid the consumer tax he himself had imposed, and no candles were left burning at court. He lived frugally and worked hard and tirelessly for the welfare of his people. He encouraged farming, reclaimed marshes, stored grain in good times and sold it in bad times. He dictated the manual of Regulations for State Officials, containing 35 chapters and 297 paragraphs in which every public servant in Prussia could find his duties precisely set out. A minister or councillor failing to attend a committee meeting would lose six months' pay. If he absented himself a second time, he would be discharged from the Royal service.

In short, Frederick William was extremely concerned by every little aspect of his country so that it suited the needs of his army. His rule was absolutist and he was a firm autocrat. He practiced rigid economy, and at his death there was a large surplus in the treasury which was kept rather bizarrely in his basement. The Prussian army was made an efficient instrument of war. Although Frederick William built up one of the most powerful armies in Europe and loved military pomp, he was essentially a peaceful man. He intervened briefly in the , but gained little territory.

Though he was peaceful, he was by no means gentle. His eldest surviving son was Frederick II (Fritz), born in 1712. Frederick William wanted him to become a fine soldier. As a little child Fritz was awakened each morning by the firing of a cannon. At the age of 6 he was given his own regiment of childrenFact|date=July 2008 to drill as cadets and a year later he was given a miniature arsenal. Fritz was beaten for being thrown off a bolting horse and for wearing gloves in cold weather. Frederick William would frequently mistreat Fritz (he preferred his younger sibling August William). After the prince attempted to flee to England, the father had one of the prince's closest friends, executed before the eyes of the prince, who himself was court-martialed. The court declared itself not competent in this case. Whether it was the king's intention to have his son executed as well (as claims), is not clear. However, the Holy Roman Emperor Charles VI intervened claiming that a prince could only be tried by the Reichstag itself. Frederick was imprisoned in the Fortress of Küstrin from 2nd September to 19th November 1731 and exiled from court until February 1732.

Frederick William and wife Sophia Dorothea of Hanover(the daughter of his uncle King and ) had fourteen children, including these:

* [http://www.xs4all.nl/~kvenjb/madmonarchs/fredwil1/fredwil1_bio.htm Biography of Frederick William I]