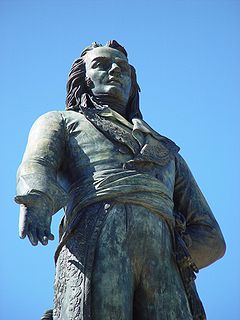 Statue of Championnet on the Champ de Mars in Valence

When the Revolution broke out he took a prominent part in the movement, and was elected by the men of a battalion to command them. In May 1793 he was charged with the suppression of the disturbances in the Jura, which he quelled without bloodshed. Under Pichegru he took part in the Rhine campaign of that year as a brigade commander, and at Weissenburg and in the Palatinate won the warm commendation of Lazare Hoche.

At Fleurus his stubborn fighting in the centre of the field contributed greatly to Jourdan's victory. In the subsequent campaigns he commanded the left wing ‘of the French armies on the Rhine between Neuwied and Düsseldorf, and took a great part in all the successful and unsuccessful expeditions to the Lahn and the Main.

In 1798 Championnet was named commander-in-chief of the "army of Rome" which was protecting the infant Roman republic against the Neapolitan court and the British fleet. Nominally 32,000 strong, the army scarcely numbered 8000 effectives, with a bare fifteen cartridges per man. The Austrian general Mack had a tenfold superiority in numbers, but Championnet so well held his own that he ended by capturing Naples itself and there setting up the Parthenopaean Republic. But his intense earnestness and intolerance of opposition, plus his penchant for looting and an unwillingness to curb atrocities by his troops, soon embroiled him with the civilians. He became involved in an unseemly quarrel with Guillaume-Charles Faipoult, one of the “Representatives on mission” (political commissar), was relieved, and subsequently imprisoned for a short time.[1] The following year, however, saw him again in the field as commander-in-chief of the "army of the Alps." This, too, was at first a mere paper force, but after three months' hard work it was able to take the field. The campaign which followed was uniformly unsuccessful, and, worn out by the unequal struggle, Championnet died at Antibes. In 1848 a statue was erected in his honour at Valence.