Regensburg (German pronunciation: [ˈʁeːɡənsbʊɐ̯k]; historically also Ratisbon, from Celtic Ratisbona, Austro-Bavarian: Rengschburg German pronunciation: [ˈrɛŋʃbʊɐ̯k], Czech: Řezno, Slovak: Rezno, Latin: Castra Regina) is a city in Bavaria, Germany, located at the confluence of the Danube and Regen rivers, at the northernmost bend in the Danube. To the east lies the Bavarian Forest. Regensburg is the capital of the Bavarian administrative region Upper Palatinate. The large medieval centre of the city is a UNESCO World Heritage Site.

The first settlements in Regensburg date to the Stone Age. The Celtic name Radasbona was the oldest name given to a settlement near the present city. Around AD 90 the Romans built a fort there.

In 179, the Roman fort Castra Regina ("fortress by the river Regen") was built for Legio III Italica during the reign of Emperor Marcus Aurelius.[2] It was an important camp on the most northern point of the Danube: it corresponds to what is today the core of Regensburg's Altstadt ("Old City") east of the Obere and Untere Bachgasse and West of the Schwanenplatz. It is believed that even in late Roman times it was the seat of a bishop, and St Boniface re-established the Bishopric of Regensburg in 739.

From the early 6th century, Regensburg was the seat of the Agilolfing ruling family. From about 530 to the first half of the 13th century, it was the capital of Bavaria. Regensburg remained an important city during the reign of Charlemagne. In 792, Regensburg hosted the ecclesiatical section of Charlemagne's General Assembly. The bishops in council condemned the heresy of Adoptionism taught by the Spanish bishops, Elipandus of Toledo and Felix of Urgel. After the partition of the Carolingian Empire, the city became the seat of the Eastern Frankish ruler, Louis II the German in 843. About two years later, in 845, fourteen Bohemian princes came to Regensburg to receive baptism there. This was the starting point of Christianization of the Czech people, and the diocese of Regensburg became the mother diocese of Prague. These events had a wide impact on the cultural history of the Czech lands, as they were consequently incorporated into the Roman Catholic and not into the Slavic-Orthodox world. The fact is well remembered, and a memorial plate at St John's Church (the alleged place of the baptism) was unveiled a few years ago, commemorating the incident in the Czech and German languages.

In 1096, on the way to the First Crusade, Peter the Hermit led a mob of Crusaders who attempted to force the mass conversion of the Jews of Regensburg and killed all those who resisted.[3]

In 1135–1146 a bridge across the Danube, the Steinerne Brücke, was built. This stone bridge opened major international trade routes between Northern Europe and Venice, and this started Regensburg's golden age as a city of wealthy trading families. Regensburg became the cultural centre of southern Germany and was celebrated for its gold work and fabrics. 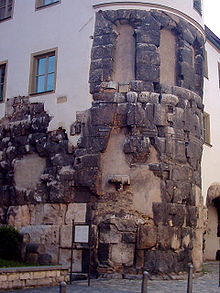 In 1245 Regensburg became a Free Imperial City and was a trade centre before the shifting of trade routes in the late Middle Ages. At the end of the 15th century Regensburg became part of the Duchy of Bavaria in 1486, but its independence was restored by the Holy Roman Emperor in 1496.

The city adopted the Protestant Reformation in 1542, and its Town Council remained entirely Lutheran until the incorporation of the city into the Principality of Regensburg under Carl von Dalberg in 1803. A minority of the population remained Roman Catholic and Roman Catholics were denied civil rights ("Bürgerrecht"). The town of Regensburg must not be confused with the Bishopric of Regensburg. Although the Imperial city had adopted the Reformation, the town remained the seat of a Roman Catholic bishop and several abbeys. Three of the latter, St. Emmeram, Niedermünster and Obermünster, were estates of their own within the Holy Roman Empire, meaning that they were granted a seat and a vote at the Imperial Diet (Reichstag). So there was the unique situation that the town of Regensburg comprised five independent "states" (in terms of the Holy Roman Empire): the Protestant city itself, the Roman Catholic bishopric and the three monasteries mentioned above.

From 1663 to 1806, the city was the permanent seat of the Imperial Diet of the Holy Roman Empire which became known as the Perpetual Diet of Regensburg. Thus Regensburg was one of the central towns of the Empire, attracting visitors in large numbers. In 1803 the city lost its status as a free city. It was handed over to the Archbishop of Mainz and Archchancellor of the Holy Roman Empire Carl von Dalberg in compensation for Mainz, which had become French under the terms of the Treaty of Lunéville in 1801. The archbishopric of Mainz was formally transferred to Regensburg. Dalberg united the bishopric, the monsteries and the town itself, making up the Principality of Regensburg (Fürstentum Regensburg). Dalberg strictly modernised public life. Most importantly he awarded equal rights to Protestants and Roman Catholics alike. In 1810 Dalberg ceded Regensburg to the Kingdom of Bavaria, he himself being compensated by the towns of Fulda and Hanau being given to him under the title of "Grand Duke of Frankfurt".

Between April 19 and April 23, 1809, Regensburg was the scene of the Battle of Ratisbon between forces commanded by Baron de Coutaud (the 65th Ligne) and retreating Austrian forces. It was eventually overrun after supplies and ammunition ran out. The city suffered severe damage during the fight with about 150 houses being burnt and others being looted.

Regensburg had both a Messerschmitt Bf 109 aircraft factory and an oil refinery, and was bombed on August 17, 1943, by the Schweinfurt-Regensburg mission and on February 5, 1945, during the Oil Campaign of World War II. Unlike most other major German cities, Regensburg received little damage from the Allied strategic bombing campaign and the nearly intact medieval city centre is listed as a UNESCO World Heritage Site. The most important cultural loss was the Romanesque church of Obermünster, which was destroyed in a March 1945 air raid and never rebuilt (the belfry survived). Also Regensburg's slow economic recovery after the war ensured that historic buildings were not torn down to be replaced by newer ones. When the upswing reached Regensburg in the late 1960s, the mindset had turned in favour of preserving the heritage. 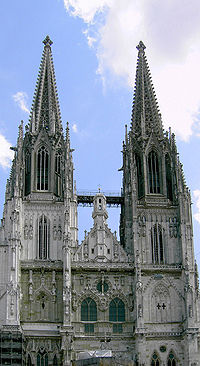 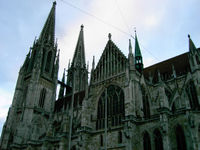 Side view of the Regensburg Cathedral 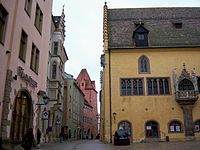 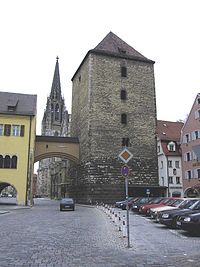 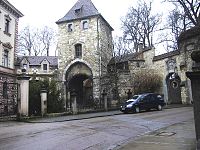 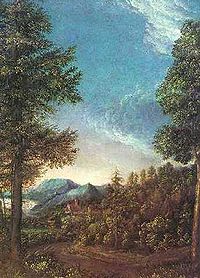 Near Regensburg there are two very imposing Classical buildings, erected by Ludwig I of Bavaria as national monuments to German patriotism and greatness. The more imposing of the two is the Walhalla, a costly reproduction of the Parthenon, erected as a Teutonic temple of fame on a hill rising from the Danube at Donaustauf, 15 km to the east. The interior, which is as rich as coloured marble, gilding, and sculptures can make it, contains the busts of more than a hundred German worthies. The second of King Ludwig's buildings is the Befreiungshalle at Kelheim, 30 km above Regensburg, a large circular building which has for its aim the glorification of the heroes of the 1813 War of Liberation.

Regensburg is situated on the northernmost part of the Danube river at the geological crossroads of four distinct landscapes:

BMW operates an automobile production plant in Regensburg; the Regensburg BMW plant produces 3-series and 1-series vehicles. Other major employers are Siemens with its subsidiary Osram Opto-Semiconductors and Siemens VDO (now Continental AG) with the headquarters of its car component business. Infineon, the former Siemens semiconductor branch, has a medium-sized factory in Regensburg. Other well known companies such as Maschinenfabrik Reinhausen, Toshiba or Krones have built plants in or near Regensburg. Amazon has also located its German customer service centre in Regensburg.

CipSoft GmbH is a video game company which is based in Regensburg.

Regensburg Hauptbahnhof (central station) is connected to lines to Munich, Nuremberg, Passau, Hof and Ingolstadt and Ulm. It can easily be reached from Munich by train, which takes about 1.5 hours. The city lies also on two motorways, the A3 from Cologne and Frankfurt to Vienna, and the A93 from Munich to Dresden. The city is also connected by "Bundesstraßen", namely the B8, B15, and B16.

The local transport is provided by an intensive bus network run by the RVV (Regensburger Verkehrsverbund).

Regensburg is twinned with: