Nordhausen
For the album by And One, see Nordhausen (album). For the Nordhausen World War II facilities, see Mittelbau-Dora and Mittelwerk.

Nordhausen is a town at the southern edge of the Harz Mountains, in the state of Thuringia, Germany. It is the capital of the district of Nordhausen. It was once known for its tobacco industry, and is still known for its distilled spirit, Nordhäuser Doppelkorn.

The town is first mentioned in a 13 May 927 document of King Henry the Fowler, but an earlier settlement on the site dates back to around 785. In 1220, Emperor Frederick II made it an Imperial Free City, and in 1430 Nordhausen joined the Hanseatic League. In 1500 it became part of the Lower Saxon Circle, and from around the same year the city began producing fermented grain liquor, which became famous under the name Nordhäuser Doppelkorn. In 1523, a year in which Thomas Müntzer spent some time in the city, the Protestant Reformation came to Nordhausen. 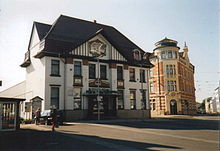 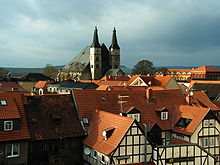 Cathedral of the Holy Cross. 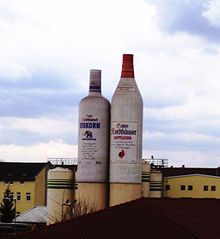 After the Peace of Westphalia in 1648, much of Nordhausen's surroundings became part of Brandenburg-Prussia, although the city itself remained independent. During the Napoleonic Wars, Prussian troops occupied Nordhausen on 2 August 1802; the city lost its status as an Imperial Free City during the German Mediatisation. It became part of the Kingdom of Westphalia created in 1807. Following the defeat of Napoleon Bonaparte, Nordhausen was included in the Kingdom of Prussia's Province of Saxony created in 1816. Nordhausen was an urban district from 1882-1950.

In 1866 Nordhausen became connected by railway to Halle.

The Mittelbau-Dora Nazi concentration camp was located on the outskirts of town during World War II to provide labor for the Mittelwerk V-2 rocket factory in the Kohnstein. On April 3 and 4 April 1945 three-quarters of the town was destroyed by bombing raids of the Royal Air Force, in which around 8,800 people died, including 1500 sick prisoners at the Boelcke Kaserne barracks within Nordhausen.[2] Earlier on August 24, 1944, 11 B-17 Flying Fortresses of Mission 568 bombed the airfield at Nordhausen as a target of opportunity.[3] On 11 April 1945, the Americans occupied the town, and on 2 July the Red Army took over. On 18 July the Soviet administration created the Institute Rabe to develop Soviet rocket technology on the basis of the substantially more sophisticated V-2 rockets. In May 1946 the Institute was subsumed into the new Institute Nordhausen, under an expanded programme of research across the Soviet occupation zone, including a new Institute Berlin. On 22 October 1946, under Operation Osoaviakhim, 10-15,000 German scientists, engineers and their families were deported to the Soviet Union, including around 300 from Nordhausen.[4] Transplanted along with their equipment, many remained there until the early 1950s.

Nordhausen was part of East Germany from 1949–1990 and was administered within Bezirk Erfurt. After the German reunification of 1990, Nordhausen was made part of the recreated state of Thuringia. Its medieval town centre has since been rebuilt. On 1 December 2007, the former municipalities Petersdorf, Rodishain and Stempeda were incorporated by Nordhausen.

Nordhausen has recently made international news due to a major labor dispute. Since 10 July 2007, 135 employees of the Biria bicycle factory (a subsidiary Bike Systems GmbH) have been occupying the factory and have resumed production, selling the cycles directly to consumers and retailers.[5]

Nordhausen has a Fachhochschule (University of Applied Sciences) that offers Bachelor's and Master's degrees in business administration, public management, and business engineering, among others.[6]

The town is twinned with