The Bishopric of Halberstadt (German: Bistum Halberstadt) was a Roman Catholic diocese from 804 until 1648 and an ecclesiastical state of the Holy Roman Empire from the late Middle Ages. Its capital was Halberstadt in present-day Saxony-Anhalt, north of the Harz mountain range. 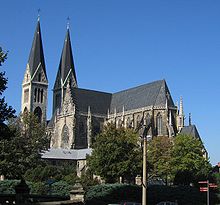 In the aftermath of the Saxon Wars, Emperor Charlemagne in 804 established a missionary diocese at Osterwieck (then called Seligenstadt) in Eastphalia, in the course of the Christianization of the pagan Saxons and Polabian Slavs. Under its (supposed) first bishop Hildegrim of Châlons the capital was moved to Halberstadt, confirmed by Charles' son Louis the Pious in a 814 deed. The bishopric's boundaries originally reached the Elbe and Saale rivers in the east, nevertheless, when Emperor Otto I founded the Archbishopric of Magdeburg in 968, Halberstadt lost the eastern half of its district to it.

The Halberstadt bishops rivalled with Magdeburg to gain political influence in the days of the Ottonian and Salian dynasty. Under the rule of Emperor Henry III they were vested with further territorial rights and in 1062 Bishop Burchard II was sent to Rome as an Imperial mediator in the conflict between Pope Alexander II and Antipope Honorius II. However the former favourite of Dowager Empress Agnes of Poitou and her son Henry IV in 1073 allied with Pope Gregory VII in the Investiture Controversy and became one of the leading figures of the Great Saxon Revolt. After the deposition of the Saxon duke Henry the Lion the Halberstadt territory evolved to an Imperial State.

In 1479 the Saxon prince-elector Ernest of Wettin pushed the election of his 13-year-old son Ernest II, Archbishop of Magdeburg since 1476, as administrator in place of the resigned Prince-Bishop Gebhard von Hoym. In 1513 Albert of Hohenzollern, younger brother of Elector Joachim I Nestor of Brandenburg, succeeded him and the Magdeburg archbishops from the House of Hohenzollern remained administrators, while in 1540 the Halberstadt territories became Lutheran during the Protestant Reformation. In 1566 two-year-old Henry Julius of Brunswick-Wolfenbüttel became the first Lutheran administrator, after which Halberstadt remained with Brunswick-Wolfenbüttel until in 1623 Henry Julius' son Christian, the "mad Halberstadter", resigned during the Thirty Years' War. He was succeeded by Christian William of Hohenzollern, son of Elector Joachim III Frederick of Brandenburg.

In the Peace of Westphalia of 1648, the bishopric was secularized as the Principality of Halberstadt, and finally given to the Hohenzollern rulers of Brandenburg-Prussia. After the 1815 Congress of Vienna, its territory was incorporated into the Prussian Province of Saxony.

After the foundation of the Archbishopric of Magdeburg, the Diocese of Halberstadt covered the following Saxon Gau counties: Balsamgau, Derlingau, the western part of the Nordthüringgau, Harzgau, Schwabengau, and Hassegau. Thus, it stretched from the Oker river near Hornburg in the west, where it bordered on the Bishopric of Hildesheim, to the Saale in the east, where the bishops acquired the former Principality of Aschersleben in 1315. The city of Brunswick, located on both sides of the Oker, was originally split between Halberstadt and Hildesheim until it passed to Duke Henry the Lion in 1142, who made it his residence.